Lugar is a name for a type of country subdivision in Portugal and Spain. [1]

As of 1 January 2020, Spain had a total population of 47,431,256, which represents a 0.9% increase since 2019. The CIA Factbook (2011) gives a racial description of "composite of Mediterranean and Nordic types" under "ethnic groups" instead of the usual breakdown of ethnic composition. This reflects the formation of the modern Kingdom of Spain by the accretion of several independent Iberian realms, like León, Castile, Navarre, the Crown of Aragon, and Granada, among others.

Chile's 2017 census reported a population of 17,574,003 people. Its rate of population growth has been decreasing since 1990, due to a declining birth rate. By 2050 the population is expected to reach approximately 20.2 million people. About 85% of the country's population lives in urban areas, with 40% living in Greater Santiago. The largest agglomerations according to the 2002 census are Greater Santiago with 5.6 million people, Greater Concepción with 861,000 and Greater Valparaíso with 824,000. 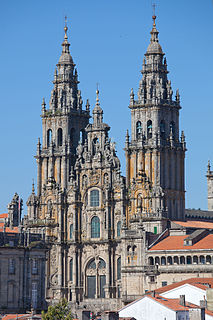 The major religion in Spain has been Catholic Christianity since the Reconquista, with a small minority of other Christian and non-Christian religions and high levels of secularization as of 2020. The Pew Research Center ranked Spain as the 16th out of 34 European countries in levels of religiosity, which is lower than Italy, Portugal and Poland, but much higher than the United Kingdom and the Nordic countries. There is no official religion and religious freedom is protected: the Spanish Constitution of 1978 abolished Catholicism as the official state religion, while recognizing the role it plays in Spanish society.

Islam was a widespread religion on the Iberian Peninsula, beginning with the Umayyad conquest of Hispania and ending with its prohibition by the modern Spanish state in the mid-16th century and the expulsion of the Moriscos in the early 17th century, an ethnic and religious minority of around 500,000 people. Although a significant proportion of Moriscos returned to Spain or avoided expulsion through forced conversion to Christianity, the practice of Islam had faded into obscurity by the 19th century.

Buenos Aires is a canton in the Puntarenas province of Costa Rica. The head city is in Buenos Aires district.

Paraíso is a district of the Paraíso canton, in the Cartago province of Costa Rica. 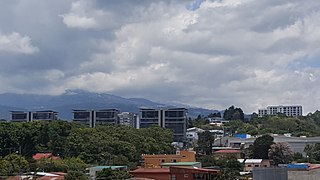 Curridabat is the eighteenth canton in the San José province of Costa Rica. The head city the homonymous Curridabat. The canton forms a suburb of the national capital of San José, lying on the southeast edge of the city.

Albolote is a city located in the province of Granada, Spain. It is one of the thirty-four entities which together form Granada's Metropolitan Area. It is formed by several populations: El Aire, El Chaparral, and Parque del Cubillas y Pretel. There are also several residential areas throughout the legal borders of the municipality. Inside those limits you can also find Granada's Penitential Center. According to Spain's Instituto Nacional de Estadística, the city had a total population of 15,563 in 2005.

Novales is a municipality located in the province of Huesca, Aragon, Spain. According to the 2004 census (INE), the municipality has a population of 191 inhabitants. It is situated on a plain on the right bank of the river Guatizalema, about 16 km Southeast of Huesca.

Moroccans in Spain formed 16.4% of the 4,549,858 foreigners in Spain as of 1 January 2017. They are again the largest foreign group in Spain, after they were surpassed temporarily by Romanians in 2007. In 2003, they were estimated to make up about 6% of all Moroccans abroad.

Romanians in Spain form the second largest group of foreigners in the country, after Moroccans. As of 2014, they made up 15.6% of Spain's total foreign population of 4,676,022 people. Most of the immigration is for economic reasons. The linguistic similarities between Romanian and Spanish, as well as Romanians' Latin identity, are also a reason for the country's attractiveness.

General elections to the Cortes Generales were held in Spain in 1834. At stake were all 188 seats in the Congress of Deputies.

The following is a timeline of the history of the city of Murcia, Spain.

General elections to the Cortes Generales were held in Spain in 1822. At stake were all 203 seats in the Congress of Deputies.

Aguas Zarcas is a district of the San Carlos canton, in the Alajuela province of Costa Rica.

El General is a district of the Pérez Zeledón canton, in the San José province of Costa Rica. Its head village is General Viejo.

The port of Cartagena is the port located in Cartagena, Murcia. It is the fourth nationwide port in freight traffic behind Algeciras, Valencia and Barcelona and ahead of Tarragona, Bilbao or Huelva. It occupies the eighth place in relation to the number of cruises. 60% of exports and the 80% of imports from the Region of Murcia are made through the port of Cartagena. More than 40% of the tourism that Cartagena receives is made by its port.