Campamento ("camp", or "tent city") and población callampa ("mushroom town") are terms given in Chile to shanty towns. The term "mushroom town" refers to the speed in which these informal settlements sprung up between the 1960s and the 1980s, literally overnight. Nowadays, the term campamento has replaced "mushroom town".

According to the NGO Un Techo para Chile ("A roof for Chile"), a campamento is defined as a group of crude dwellings of more than eight families, lacking at least one of the following basic services: drinking water, electricity and wastewater treatment, and which are illegally residing on the land. [1]

Between 2010 and 2020, the total number of campamentos grew by 22%. The highest increases were seen in the cities of Antofagasta, Calama, Copiapó, Iquique-Alto Hospicio, La Serena, Valparaíso and Viña del Mar. [3]

Squatting is the action of occupying an abandoned or unoccupied area of land or a building, usually residential, that the squatter does not own, rent or otherwise have lawful permission to use. The United Nations estimated in 2003 that there were one billion slum residents and squatters globally. Squatting occurs worldwide and tends to occur when people who are poor and homeless find empty buildings or land to occupy for housing. It has a long history, broken down by country below.

A megacity is a very large city, typically with a population of more than 10 million people. Precise definitions vary: the United Nations Department of Economic and Social Affairs in its 2018 "World Urbanization Prospects" report counted urban agglomerations having over 10 million inhabitants. A University of Bonn report held that they are "usually defined as metropolitan areas with a total population of 10 million or more people". Others list cities satisfying criteria of either 5 or 8 million and also have a population density of 2,000 per square kilometre. The terms conurbation, metropolis, and metroplex are also applied to the latter.

Algoma is a city in Kewaunee County in the U.S. state of Wisconsin. The population was 3,167 at the 2010 census. Algoma is part of the Green Bay Metropolitan Statistical Area.

Shoshoni is a town in Fremont County, Wyoming, United States. The population was 649 at the 2010 census. The town is named for the Shoshone tribe of Native Americans, most of whom live on the nearby Wind River Indian Reservation.

The poverty threshold, poverty limit, poverty line or breadline, is the minimum level of income deemed adequate in a particular country. The poverty line is usually calculated by finding the total cost of all the essential resources that an average human adult consumes in one year. The largest of these expenses is typically the rent required for accommodation, so historically, economists have paid particular attention to the real estate market and housing prices as a strong poverty line affect. Individual factors are often used to account for various circumstances, such as whether one is a parent, elderly, a child, married, etc. The poverty threshold may be adjusted annually. In practice, like the definition of poverty, the official or common understanding of the poverty line is significantly higher in developed countries than in developing countries.

Pueblos jóvenes is the term used for the shanty towns that surround Lima and other cities of Peru. Many of these towns have developed into districts of Lima such as Comas, Los Olivos District and Villa El Salvador.

A shanty town or squatter area is a settlement of improvised buildings known as shanties or shacks, typically made of materials such as mud and wood. A typical shanty town is squatted and in the beginning lacks adequate infrastructure, including proper sanitation, safe water supply, electricity and street drainage. Over time, shanty towns can develop their infrastructure and even change into middle class neighbourhoods. They can be small informal settlements or they can house millions of people.

Gecekondu is a Turkish word meaning a house put up quickly without proper permissions, a squatter's house, and by extension, a shanty or shack. Gecekondu bölgesi is a neighborhood made of those gecekondular. Gecekondu neighborhoods offer an affordable alternative for shelter for many low-income households who can not afford to purchase or rent formal housing.

A villa miseria, or just villa, is a type of shanty town or slum found in Argentina, mostly around the largest urban settlements. 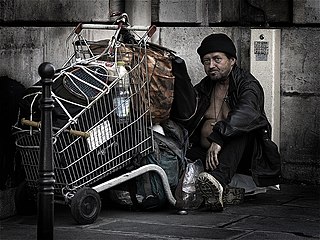 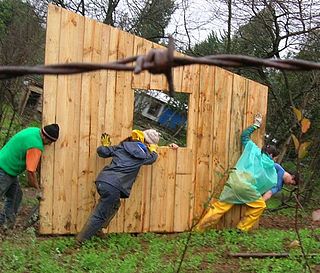 Mediagua, is the name given in Chile to a type of prefabricated house, constructed of wood panels, which can be erected in less than a day. The traditional model has an area of 18 square metres (190 sq ft).

Precaria is a concept suggested in the framework of the international campaign of the non governmental organisation Un techo para mi país (TECHO), in English “A roof for my country," that designates allegorically an imaginary country which would be inhabited by all the poor people from Latin America, for pointing out the magnitude of this critical situation as opposed to the constitutional law of the region and the human rights system of international law.

TECHO, also known as Un Techo para mi País (UTPMP), is a nonprofit organization that mobilizes youth volunteers to fight extreme poverty in Latin America, by constructing transitional housing and implementing social inclusion programs. It was founded by a Jesuit priest, and working with more than 720,000 volunteers, it has constructed houses for over 102,400 families in 19 countries in Latin American and the Caribbean and 2 offices located in Miami, Florida, US, and London, England, that work as funds hubs.

Illegal housing in India consists of huts or shanties built on land not owned by the residents and illegal buildings constructed on land not owned by the builders or developers. Although illegal buildings may afford some basic services, such as electricity, in general, illegal housing does not provide services that afford for healthy, safe environments.

Squatting in South Korea is the occupation of land or buildings without the permission of the relevant authorities. From the 1950s onwards, shanty towns called P'anjach'on formed around cities, in particular the capital Seoul. As well as providing housing, squatting is used as a tactic by groups opposing gentrification and striking workers.

Squatting in Chile is the occupation of unused land or derelict buildings without the permission of the owner. From the 1960s onwards, informal settlements known as callampas were permitted although there were also evictions such as the massacre of Puerto Montt in 1969. In the 1970s, the government of Salvador Allende encouraged occupations, then following the coup d'état, the military junta repressed squatting. Callampas then became known as campamentos.