The Parishes of Ecuador (Spanish : Parroquias) are the third-level administrative units of Ecuador. The Cantons of Ecuador are divided into parishes which are similar to municipalities or communes in many countries. There are over 1,500 parishes in Ecuador.

Ecuador, officially the Republic of Ecuador, is a country in northwestern South America, bordered by Colombia on the north, Peru on the east and south, and the Pacific Ocean on the west. Ecuador also includes the Galápagos Islands in the Pacific, about 1,000 kilometres (620 mi) west of the mainland. The capital city is Quito, and its largest city as well.

Quito is the capital of Ecuador, the country's most populous city, and at an elevation of 2,850 metres (9,350 ft) above sea level, it is the second highest official capital city in the world, after La Paz, and the one which is closest to the equator. It is located in the Guayllabamba river basin, on the eastern slopes of Pichincha, an active stratovolcano in the Andes Mountains.

A canton is a type of administrative division of a country. In general, cantons are relatively small in terms of area and population when compared with other administrative divisions such as counties, departments, or provinces. Internationally, the best-known cantons - and the most politically important - are those of Switzerland. As the constituents of the Swiss Confederation, theoretically, the Swiss cantons are semi-sovereign states.

Galápagos is a province of Ecuador in the country's Insular region, located approximately 1,000 km (620 mi) off the western coast of the mainland. The capital is Puerto Baquerizo Moreno. 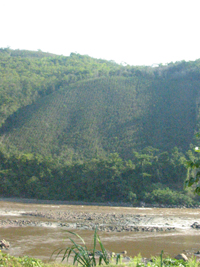 Zamora Chinchipe, Province of Zamora Chinchipe is a province of the Republic of Ecuador, located at the southeastern end of the Amazon Basin, which shares borders with the Ecuadorian provinces of Azuay and Morona Santiago to the north, Loja and Azuay to the west, and with Peru to the east and south. The province comprises an area of approximately 10,456 km² and is covered with a uniquely mountainous topography which markedly distinguishes it from the surrounding Amazonian provinces. Zamora-Chinchipe is characterized and largely identified by its mining industry; indigenous ethnic groups with a rich archaeological legacy; its biodiversity; and its niche and tourist attractions, which include a number of waterfalls well-noted for their beauty. The province takes its name from the bureaucratic fusion of the Zamora and Chinchipe cantons. The provincial capital is the city of Zamora. 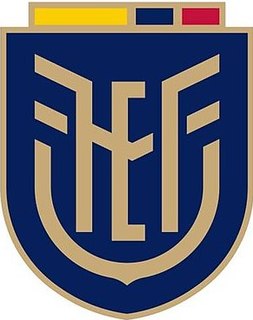 The Ecuador national football team has represented Ecuador in men's international football since 1938, and is controlled by the Ecuadorian Football Federation. They joined FIFA in 1926 and CONMEBOL a year later.

Quito, officially the Metropolitan District of Quito, is a canton in the province of Pichincha, Ecuador.

Portoviejo is a city in Ecuador, and the capital of the Province of Manabí 30 kilometres from the Pacific coast.. Also known as the city of the "Royal Tamarind Trees" for the beautiful trees found in the area. Portoviejo is the main political and economical centre of the Portoviejo River valley, which also includes the cantons of Santa Ana and Rocafuerte, where about 110 square kilometres are cultivated every year. The valley is rich in the production of tomatoes, onions, peppers, bananas, mangoes and other tropical fruits. The city, which was affected by economic crisis in the eighties and nineties, is now recovering but severe budget limitations and a huge unemployment rate present difficulties for local authorities. Portoviejo is a large commercial center for the province, where there are two shopping malls, one with a large hypermarket, 8 movie theaters, food court, and other stores. The city is home of the cancer treatment hospital "Dr Julio Villacreses Colmont" serving the provinces of Manabí and Esmeraldas.

The Cantons of Ecuador are the second-level subdivisions of Ecuador, below the provinces. There are 221 cantons in the country, of which three are not in any province. The cantons are further sub-divided into parishes, which are classified as either urban or rural. Below is a list of cantons by province.

Cotacachi is a canton of Imbabura province of Ecuador in South America. The name also refers to the city which is the seat of that canton, one of Ecuador's leading artisanal manufacturers of leather goods, and to the dormant Cotacachi Volcano which overlooks the canton.

Rumiñahui or Rumiñawi is a canton of Pichincha Province in Ecuador. Its seat is Sangolquí. The canton lies southeast of Quito Canton and forms a suburb of Quito.

Piñas is a canton in the El Oro Province, Ecuador. Its seat is Piñas. It is also known as the "Orchid of The Andes" because of the many orchids grown nearby. The town was named Piñas by Juan de Loayza, in honor of his homeland Piñas in Spain. It is located 1,126 metres above sea-level. 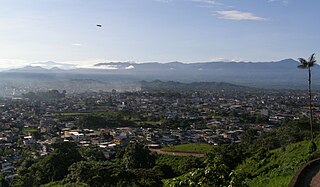 Santo Domingo de los Tsáchilas is a province in the Republic of Ecuador, created in October 2007 from territory previously in the province of Pichincha.

The following outline is provided as an overview of and topical guide to Ecuador:

Chaupicruz is an electoral parish or district of Quito, the capital city of Ecuador in northwestern South America. The parish was established as a result of the October 2004 political elections when the city was divided into 19 urban electoral parishes.

Baños is a parish located to the south west in the canton Cuenca, province of Azuay, Ecuador. The parish has an area of 327.3 km² and the altitude varies from 2050 to 4200 meters above sea level, with an average temperature of 14 ° C. It is located in the foothills of the mountain range of El Cajas, surrounded by high-altitude areas as: Chanchán, Nero, Yanasacha, Sunsún and Huasiloma. According to the Ecuador census of 2010 had a total population of 16.8611 inhabitants that correspond to 3.33% of the total population of the canton Cuenca.

Parroquia or Parròquia is a term equivalent to the English Parish; used in Andorra, Ecuador, Venezuela, Peru and some parts of northwestern Spain.

The 2019–20 coronavirus pandemic was reported to have spread to Ecuador on 29 February 2020 when a woman in her 70s tested positive for the virus. Ecuador has been described in April as emerging as the "epicentre" of the pandemic in Latin America. The city of Guayaquil has been overwhelmed to the point where bodies are being left in the street. As of April 2020, Ecuador has been distributing cardboard coffins due to the country's struggle in evacuating the dead bodies. The government is planning to build emergency cemeteries to dispose of the bodies which are left in the streets. The number of deaths is believed to be significantly higher than the official figure due to a low rate of testing, with many thousands of excess deaths reported compared to the equivalent figure for a normal period. A New York Times analysis found 7,600 excess deaths had occurred from 1 March to 15 April as the mortality rate spiked to three times as much as usual, indicating that the official death toll is an underestimate by more than an order of magnitude.