In the Republic of Austria, the municipality (German : Gemeinde, sometimes also Ortsgemeinde) is the administrative division encompassing a single village, town, or city. The municipality has corporate status and local self-government on the basis of parliamentary-style representative democracy: a municipal council (Gemeinderat) elected through a form of party-list system enacts municipal laws, a municipal executive board (Gemeindevorstand) and a mayor (Bürgermeister, fem. Bürgermeisterin) appointed by the council are in charge of municipal administration. Austria is currently (January 1, 2020) partitioned into 2,095 municipalities, ranging in population from about fifty (the village of Gramais in Tyrol) to almost two million (the city of Vienna). There is no unincorporated territory in Austria.

The existence of municipalities and their role as carriers of the right to self-administration are guaranteed by the Austrian constitution (B-VG Art. 116 (1)).

The constitution means for municipalities to be autonomous (eigenverantwortlich) in any matter that a village, town, or city can presumed to be both interested in handling and best capable of handling. Municipal authorities are required to comply with national and provincial legislation and can be held accountable by courts for failure to abide by the rule of law, but they are not politically answerable to national or provincial administrators and do not take orders from them. (B-VG 118)

All real estate in Austria falls within a municipality's borders, meaning that there are no unincorporated areas and no way for either the government or any resident to sidestep the requirement that each permanent resident be part of a municipal community. (B-VG 116 (2)).

All municipalities are corporations and have the right to own property, run businesses, levy municipal taxes, and generally manage their own financial affairs. (B-VG 116 (3)). Municipalities have a right to form municipal associations, subject to supervision by the provincial administration (B-VG 116a) and enter into treaties with other municipalities (B-VG 116b).

Municipalities are miniature parliamentary democracies with a legislature elected by the people and an executive branch installed and supervised by the legislature:

Municipal governments do not have judicial branches.

Larger municipalities are typically granted city status (Stadtrecht). The distinction, while important in medieval and early modern times, is purely symbolic today. City status does not currently confer any additional legal responsibilities. There exists a number of cities that are barely more than villages at present and that are labelled cities merely because they used to be regional population centers in the distant past. The city of Rattenberg, for example, has a population of about 400. The city of Hardegg has about 1200 inhabitants, although the historic city core − Hardegg proper without what used to be the surrounding hamlets − is home to just 80 people. Constitutionally, the main difference between municipalities that are cities (Städte, sing. Stadt) and municipalities that are not is that in cities, the municipal executive board is called not a Gemeindevorstand but a Stadtrat(B-VG 117 (1)).

A similar distinction, meaningful in the past but symbolic today, is that of market town (Marktgemeinde).

Cities that are economic and administrative centers of wider geographic reach can be elevated to statutory city status. A statutory city (Stadt mit eigenem Statut or Statutarstadt) is vested, in addition to its purview as a municipality, with the duties of a district administrative authority. The status does not come with any additional political autonomy: district administrative authorities are essentially just service centers that citizens use to interact with the national government, for example to apply for driver licenses or passports. The national government generally uses the provinces to run these points of contact on its behalf; in the case of statutory cities, the municipality gets to step up. Just like Austria has a number of villages that are nominally cities because they used to be significant in the past, Austria has a number of minor towns that hold statutory city status because they used to be regional capitals a few centuries ago. Examples include Waidhofen an der Ybbs, population ca. 11,000, or Rust, population ca. 1900. A municipality that desires statutory city status today needs to have at least 20,000 inhabitants. (B-VG 116 (3)) The municipal executive board of a statutory city is called a city senate (Stadtsenat). (B-VG 117 (1))

Informally, municipalities that are neither cities nor market towns are sometimes called Landgemeinden, lit. "rural municipalities".

The constitution distinguishes between a municipality's sphere of inherent responsibilities (eigener Wirkungsbereich) and the sphere of responsibilities delegated to the municipalities by the higher levels of government (übertragener Wirkungsbereich). The constitution defines a minimum extent of the inherent sphere that national and provincial law may add to but not detract from: (B-VG 118 (2))

Additional legislation vests municipalities with a large number of additional responsibilities. Municipalities are in charge of public water supply, sewage disposal, garbage disposal, public lighting, and cemetery construction and maintenance, among other things. They run schools and kindergartens, assisted living facilities, sports and cultural facilities, and fire departments. The purview each Austrian municipality is constitutionally guaranteed to have is a small share of the purview it has in practice. Matters of public services (Daseinsvorsorge) far outclass matters of political administration (Obrigkeitliche Verwaltungs) in terms of both salience and budgets. (Raschauer 2009, Rz 330.)

The 23 districts of Vienna (Wiener Gemeindebezirke) and the 17 districts of Graz are vested with a limited form of precinct-level self-government. The district constituency elects a district assembly (Bezirksvertretung), the district assembly in turn elect a district commissioner (Bezirksvorsteher). District assemblies and commissioners are responsible for whatever matters the city chooses to devolve to them – in general, they run schools and take care of road maintenance, general neighborhood maintenance, and traffic planning. They have a certain measure of budgetary autonomy, although they cannot levy taxes and depend on money allocated to them by the city.

The 15 districts of Klagenfurt are roughly neighborhood-sized quarters with no special autonomy.

As of January 1, 2018 there are 15 statutory cities in Austria, 186 other cities, 770 market towns, and 1127 other communes, for a total of 2,098 municipalities. One of these municipalities stands out: the city of Vienna is a statutory city and a state at the same time. At 1,900,000 inhabitants, the national capital also seven times larger than the second most populous city, Graz.

For the other eight states, the numbers are as follows (Statistik Austria 2018):

With respect to population, there is wide variation within each class of municipalities:

Rust is a city in the Austrian state of Burgenland, located on the western shore of Lake Neusiedl near the border with Hungary. With only about 1,900 inhabitants, it is the country's smallest statutory city, as it was endowed with the rights of a royal free city by the Hungarian crown in 1681. As a Statutarstadt, it also forms an administrative district (Bezirk) in its own right. The city is famous for its wines, especially for Beerenauslese, ice wine and - especially - Ruster Ausbruch.

In Austrian politics, a district is a second-level division of the executive arm of the country's government. District offices are the primary point of contact between resident and state for most acts of government that exceed municipal purview: marriage licenses, driver licenses, passports, assembly permits, hunting permits, or dealings with public health officers for example all involve interaction with the district administrative authority. 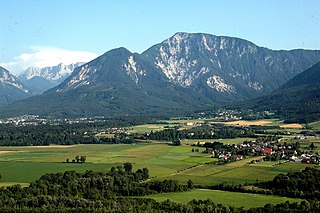 Ferlach in the district of Klagenfurt-Land in Carinthia is the southernmost town in Austria. It is known for its centuries-old gunsmith tradition, part of the Austrian intangible cultural heritage since 2010.

Gmünd, Czech: Cmunt, is a town in the northwestern Waldviertel region of Lower Austria and the capital of the Gmünd district. The municipality consists of the Katastralgemeinden Böhmzeil, Breitensee, Eibenstein, Gmünd and Grillenstein. Situated on the Lainsitz (Lužnice) river where it forms the border with České Velenice in the Czech Republic, it is an important road and railway crossing point, next to the Blockheide protected area.

Feldkirchen in Kärnten is a town in the Austrian state of Carinthia and the capital of the district of the same name. It consists of the Katastralgemeinden Fasching, Feldkirchen, Glanhofen, Gradisch, Hoefling, Klein Sankt Veit, Pernegg, Rabensdorf, Sankt Ulrich, Sittich, Tschwarzen and Waiern. The name Feldkirchen is meaning the church in the fields.

Moosburg is a market town in the Klagenfurt-Land district in the Austrian state of Carinthia. 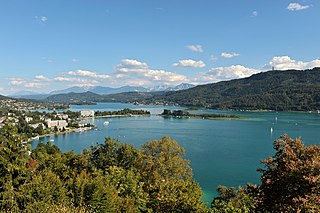 Pörtschach am Wörthersee is a municipality in the district of Klagenfurt-Land in Carinthia, Austria. It is an established summer resort and lakeside town on Wörthersee. 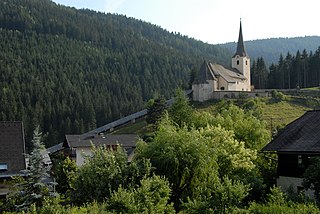 Deutsch-Griffen is a municipality in the district of Sankt Veit an der Glan in Austrian state of Carinthia. 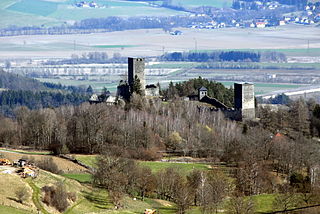 Liebenfels is a market town in the district of Sankt Veit an der Glan in the Austrian state of Carinthia. 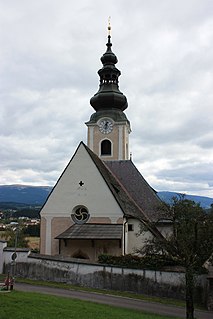 Mölbling is a municipality on the Gurk River in the district of Sankt Veit an der Glan in the Austrian state of Carinthia.

Sankt Georgen am Längsee is a municipality in the district of Sankt Veit an der Glan in Carinthia, Austria.

Heiligenkreuz is a municipality in the district of Baden, in the Austrian state of Lower Austria. It is known for the Cistercian monastery of Heiligenkreuz Abbey, the associated papal college Benedict XVI and the Catholic Leopoldinum seminary. 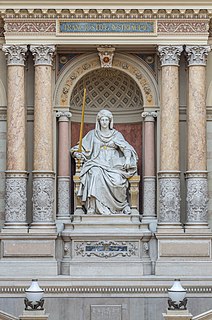 The Judiciary of Austria is the branch of the Austrian government responsible for resolving disputes between residents or between residents and the government, holding criminals accountable, making sure that the legislative and executive branches remain faithful to the European and Austrian constitutions and to international human rights standards, and generally upholding the rule of law. The judiciary is independent of the other two branches of government and is committed to guaranteeing fair trials and equality before the law. It has broad and effective powers of judicial review. 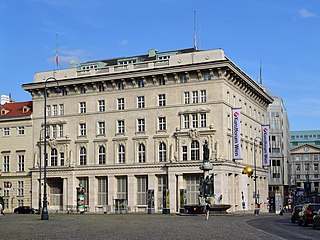 The Constitutional Court in Austria is the tribunal responsible for reviewing the constitutionality of statutes, the legality of ordinances and other secondary legislation, and the constitutionality of decisions of certain other courts. The Constitutional Court also decides over demarcation conflicts between courts, between courts and the administration, and between the national government and the regional governments. It hears election complaints, holds elected officials and political appointees accountable for their conduct in office, and adjudicates on liability claims against Austria and its bureaucracy.

In Austrian politics, a statutory city is a city that is vested, in addition to its purview as a municipality, with the powers and duties of a district administrative authority. The city administration thus functions as both a municipal government and a branch of the executive arm of the national government. As resident of a statutory city would, for example, contact a city office and interact with city employees to apply for a driver license or a passport.

As a result of the dual function of Vienna as a municipality and Austrian state (city-state), the 100 members of the Gemeinderat of Vienna, the municipal council of the city of Vienna, also act as members of the Landtag, the state legislature of Vienna. Members serve for five years. 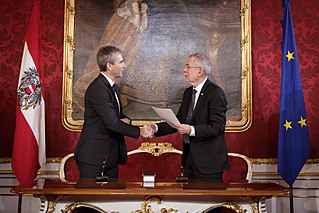 In Austrian constitutional law, a minister is a member of the national cabinet. Most ministers are responsible for a specific area of Austrian public administration and stand at the head of a specific department of the Austrian bureaucracy; ministers without portfolio exist and used to be common in the First Austrian Republic but are rare today. Most ministers control a ministry; some ministers control a section of the Chancellery, the ministry headed by the chancellor. A minister is the supreme executive organ within his or her area of responsibility: ministers do not take orders from either the president or the chancellor; their decisions are subject to judicial review but cannot be overruled by any other part of the executive branch. 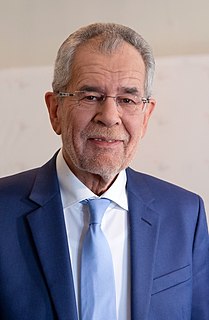