Macedonian Footballer of the Year

Macedonian Footballer of the Year an annual title awarded to the best football player of the year in North Macedonia.

Young player of the year

FK Sileks is a football club based in Kratovo, North Macedonia who play in the Macedonian First League.

FK Rabotnichki or more commonly Rabotnički and Rabotnicki is a football club that plays at the Toshe Proeski Arena in Skopje, North Macedonia. They currently compete in the Macedonian First League.

Toše Proeski National Arena is a sports stadium in Skopje, North Macedonia. It is currently used mostly for football matches, but sometimes also for music concerts or athletics. It is the home stadium of FK Vardar and FK Rabotnički from Skopje, both of which compete in the Macedonian First League, as well as the home ground of the North Macedonia national football team on almost all occasions. On 30th June 2015, the UEFA announced that the National Arena Toše Proeski will host in 2017 for the first time an UEFA Super Cup final. The stadium was previously known as the City Stadium Skopje until 2009 and Philip II National Arena until 2019. By an Executive Decision of the Government of the Republic of Northern Macedonia adopted on 9th April, 2019, the National Arena was renamed "National Arena Todor Proeski" in honour of the Macedonian pop icon Todor "Toše" Proeski. With capacity of over 33.000, the National Arena falls in the category of medium-sized stadiums in Europe, while on the Balkan Peninsula it is one of the ten largest stadiums. 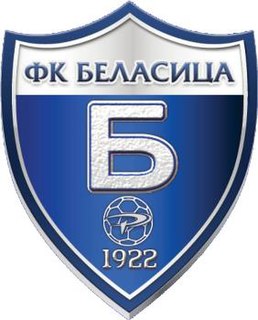 FK Belasica is a football club based in the city of Strumica, Republic of North Macedonia. They are currently competing in the Macedonian Second League. 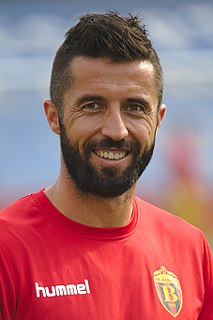 Aco Stojkov is a Macedonian retired footballer who last played for Osogovo.

The 2006–07 Macedonian Football Cup was the 15th season of Macedonia's football knockout competition. FK Makedonija Gjorche Petrov were the defending champions, having won their first title. The 2006–07 champions were FK Vardar who won their fifth title.

Nikola Gligorov is a footballer from the Republic of Macedonia who plays as a central midfielder but can also play as a defensive midfielder.

FK Lokomotiva Skopje is a football club based in the Karpoš neighborhood of Skopje, North Macedonia. They are currently competing in the Macedonian Third League. Current captain is Denis Milenov n.10. Their best player is the midfield maestro Tugay Zekir.

Agim Ibraimi is a Macedonian professional footballer who plays for Kukësi as a midfielder.

Aleksandar Radović is a Montenegrin footballer who plays as a right side defender for Drina Zvornik.

The Macedonia national futsal team is controlled by the Football Federation of Macedonia, the governing body for futsal in North Macedonia. It represents the country in international futsal competitions, such as the World Cup and the European Championships.

Ramiz Muarem Muarem is a Macedonian association footballer. Muarem plays as a midfielder. He most recently played for the Macedonian First Football League side Shkupi and has played for Qarabağ in Azerbaijan, Eskişehirspor, Orduspor in Turkey and FK Rabotnički in Macedonia at club level as well as the Macedonia national football team, for whom he has three caps, all won in 2011. He has also represented Macedonia at under-17, under-19 and under-21 level. Muarem is right-footed.

The 2012–13 Macedonian Football Cup was the 21st season of Macedonia's football knockout competition. Renova are the defending champions, having won their first title. The 2012–13 champions were FK Teteks who won their second title.

The following article presents a summary of the 2015–16 football season in the Republic of Macedonia, which is the 24th season of competitive football in the country.

The 2016–17 Macedonian First League was the 25th season of the Macedonian First Football League, the highest football league of Macedonia. The fixtures were announced on 25 July 2016. It began on 7 August 2016 and ended on 31 May 2017 with a winter break which began on 4 December 2016 and ended on 19 February 2017. From that season the format was changed which will each team be played the other sides four times on home-away basis, for a total of 36 matches each instead of play-off and play-out after 27th round.

Ballistet are ultra supporters of the Macedonian football club KF Shkëndija. They were officially established as the main ultras group for Shkëndija in 1992.

The 2020–21 Macedonian First League was the 29th season of the Macedonian First Football League, the highest football league of North Macedonia. It began on 8 August 2020 and ended on 16 May 2021. Vardar are the defending champions, having won their eleventh title in 2019–20 after was season abandoned due to the COVID-19 pandemic.

The 2020–21 Macedonian Football Cup is the 29th season of North Macedonia's football knockout competition. This edition did not have a defending champions due to the interruption of the previous edition due to the COVID-19 pandemic.