Georgian Footballer of the Year

Georgian Footballer of the Year is an annual award given to the best Georgian footballer.

The award for an official year is given in summer on the basis of players' performance in a winter league season. The winner is elected by results of a poll conducted among Georgian journalists. From 1993, it is awarded by sports daily newspaper Sarbieli (სარბიელი). Earlier, in 1990 and 1992, another newspaper, Kartuli Pekhburti (ქართული ფეხბურთი), awarded it.

Professional Football Club CSKA , commonly referred to as CSKA Moscow outside of Russia, or simply as CSKA[tsɛ ɛs ˈka], is a Russian professional football club. It is based in Moscow, playing its home matches at the 30,000-capacity VEB Arena. 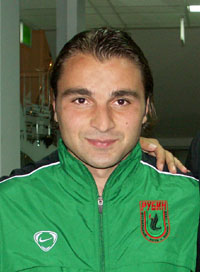 Georgi Kinkladze, also spelled Georgiou, or Giorgi, or shortened to Gio, is a Georgian former footballer, who played as a playmaking midfielder. 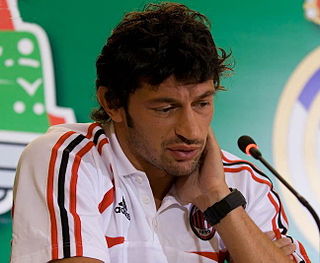 Kakhaber "Kakha" Kaladze is a Georgian politician and retired footballer. He has served as a Mayor of Tbilisi since November 2017. A versatile player, he was capable of playing both as a centre-back and as a left-back, or even as a wide midfielder. He played for the Georgia national team from 1996 to 2011. He was voted Georgian Footballer of the Year in 2001–2003, 2006 and 2011 and was considered as one of Georgia's most important players. 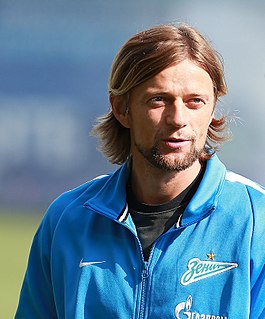 Anatoliy Oleksandrovych Tymoshchuk is a Ukrainian football coach and a former midfielder, currently an assistant coach with Russian Premier League club Zenit Saint Petersburg. He is also a former captain of the Ukraine national team before retiring from international football in 2016. During his playing career, he was "a deep-lying midfielder who is comfortable on the ball and capable of ferocious long-range shooting".

Levan Kobiashvili is a Georgian former professional footballer and the current president of the Georgian Football Federation and a member of Parliament of Georgia. 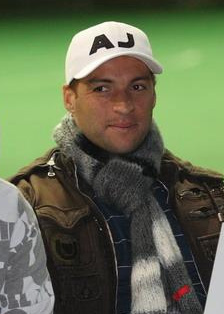 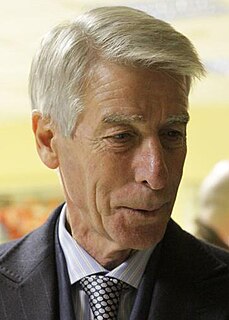 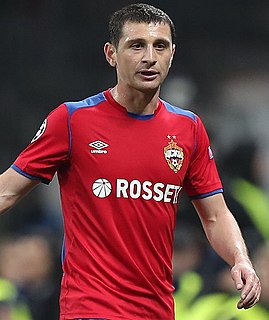 Anna Yuriyivna Ushenina is a Ukrainian chess grandmaster who was Women's World Chess Champion from November 2012 to September 2013.

Footballer of the Year in Russia was an annual award given by Futbol weekly to the Russian Premier League player of the season. The title was awarded according to the results of a poll conducted by the newspaper. Players of each Premier League club are polled.

The Uzbekistan Footballer of the Year is a yearly football award presented by the Uzbekistan Football Association to the most outstanding Uzbekistan footballer among who has been considered to have performed the best in national team or over Uzbek League and other national championship season. The award is given out at the end of the calendar year and is decided by the survey among sport journalists and football experts.

Vladimir Gendlin is a Russian commentator and expert of boxing, the two-time TEFI award winner. He is the Founder of professional boxing telecasts on Russian television. Gendlin's program «Bolshoi Ring» was considered the best program about boxing in the world by the World Boxing Union in 1995.