Latvian Footballer of the Year 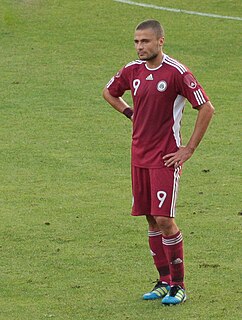 Māris Verpakovskis, is a retired Latvian footballer who played as a striker. He represented Latvia at UEFA Euro 2004 and is the only Latvian player to score at the end stage of a major international football tournament. 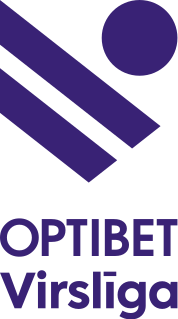 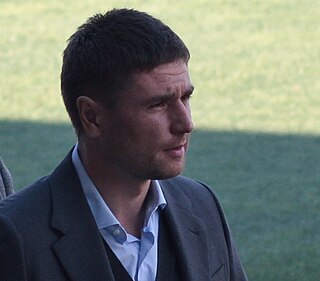 Marians Pahars is a Latvian professional football manager and a former player.

Skonto FC was a Latvian football club, founded in 1991. The club played at the Skonto Stadium in Riga. Skonto won the Virsliga in the first 14 seasons of the league's resumption, and often provided the core of the Latvia national football team. With those 14 national championships in a row, they set a European record, men and women's football combined, until the women of Faroese club KÍ Klaksvík won their 14th championship in a row in 2013. 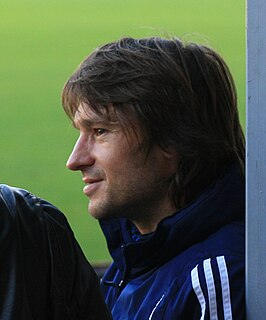 Jurijs Andrejevs is a former footballer who is currently the sporting director of Latvian Football Federation.

Kaspars Gorkšs is a Latvian former professional footballer who played as a defender. Gorkšs was also the captain of the Latvian national team. From 2018 to 2019 Gorkšs served as president of the Latvian Football Federation. 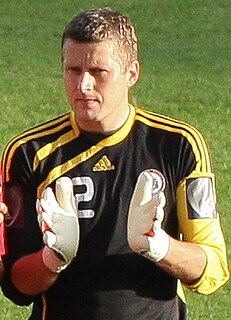 Andris Vaņins is a Latvian former professional footballer who works as a goalkeeping coach for Swiss club FC Sion. A goalkeeper, he most notably played for Sion, making over 200 league appearances. At international level, he earned 100 caps for the Latvia national team.

Tamaz Pertia is a former Georgian football midfielder, currently a manager with Valmieras FK in the Latvian Higher League.

The 2007 season of Baltic League was the first edition of the Baltic League. The competition was won by Liepājas Metalurgs of Latvia, who beat fellow Latvians FK Ventspils 8–2 on aggregate in the final, which was spread over two legs on 8 November 2007 and 11 November 2007.

This page shows the standings and results for Group F of the UEFA Euro 2012 qualifying tournament.

2010 Latvian Higher League was the 19th season of top-tier football in Latvia. It began on 9 April 2010 with the first round of games. Liepājas Metalurgs were the defending champions, having won their second league title last season.

Pāvels Šteinbors is a Latvian professional footballer who plays as a goalkeeper for Jagiellonia Białystok in the Ekstraklasa.

Vitālijs Jagodinskis is a Latvian professional footballer who plays for FK Rīgas Futbola Skola and the Latvia national team as a centre back.