Last updated May 28, 2021
For other people with the same name, see Michael Billington.

Michael Keith Billington OBE (born 16 November 1939) is a British author and arts critic. [1] He writes for The Guardian , and was the paper's chief drama critic from 1971 to 2019. [2] Billington is "Britain's longest-serving theatre critic" and the author of biographical and critical studies relating to British theatre and the arts. He is the authorised biographer of the playwright Harold Pinter (1930–2008). [3] [4] [5]

Billington was born on 16 November 1939, in Leamington Spa, Warwickshire, England, and attended Warwick School, an independent boys' school in Warwick. [6] [7] [8] He attended St Catherine's College, Oxford from 1958 to 1961, where he studied English and was appointed theatre critic of Cherwell . [9] He graduated with a BA degree. [8] [10]

As a member of Oxford University Dramatic Society (OUDS), in 1959, Billington played the Priest in The Birds , by Aristophanes, his only appearance as an actor, [11] [12] and, in 1960, he directed a production of Eugène Ionesco's The Bald Prima Donna , a performance of which was attended by Harold Hobson, the drama critic for The Sunday Times . [10] Although it won "an Oxford drama competition" and was an entry in that year's National Student Drama Festival (NSDF 1960), which Hobson had co-founded in 1956, Billington's directorial debut was not well received at the Festival, yet Billington credits Hobson with having "changed my life." [10] After the Festival, he decided to forego pursuing a career as a theatre practitioner to "follow" Hobson's "footsteps" and become a critic of theatre too; five years later, they would become colleagues at The Times. [10]

Billington's broadcasting career had begun by 1965. Philip French, then a BBC radio producer, asked him to review two short radio plays by the then virtually unknown Tom Stoppard which were being broadcast on the BBC Third Programme. [15] Later, he was a presenter (and participant) in Critics Forum (Radio 3), which ended in 1990, and the Kaleidoscope arts programme (Radio 4). He has contributed to other British arts and drama radio and television programmes. [7]

Billington blogs for guardian.co.uk and previously also blogged for Whatsonstage.com. Billington left his role as The Guardian's chief theatre critic at the end of 2019, although he continues to write for the newspaper. [2]

Billington has taught in the University of Pennsylvania's Penn-in-London program since at least as early as 1997, and he teaches courses in theatre at King's College London, where he has been a visiting professor since 2002. [4] [16] [17]

In April 2007, Billington presented an invited paper on "Is British Theatre As Good As It Claims?" to the Elizabethan Club, at Yale University, in New Haven, Connecticut, prior to moderating a panel discussion at the conference Artist and Citizen: 50 Years of Performing Pinter", at Leeds University, where he attended and later reviewed the production Being Harold Pinter, by the Belarus Free Theatre. [18] [19]

Billington is the author of several biographical and critical studies of subjects relating to British theatre and the arts, including books about Peggy Ashcroft (1907–1991), Tom Stoppard (born 1937), and Alan Ayckbourn (born 1939). He also wrote the official authorised biography of 2005 Nobel Laureate in Literature prizewinner Harold Pinter (1930–2008), which first appeared in 1996.

In March 2007 Faber and Faber published Billington's book State of the Nation: British Theatre Since 1945, which won the 2007 annual Theatre Book Prize from The Society for Theatre Research, presented to Billington by Sir Donald Sinden on 1 April 2008. [3] [6] [20] [21] [22] Billington has spoken about the book at various venues, including the Warwick Arts Centre at the University of Warwick, [5] and has reviewed his reviews. [23]

Following Pinter's death on 24 December 2008, The Bookseller reported that Faber and Faber planned "to rush out an updated version" of Harold Pinter, "which will take account of the international response to Pinter's death, ... at the end of January [2009]" and that it "will be released first as an e-book." [24]

As a director his work also includes The Will by Marivaux at the Barbican Conservatory, London, with an ensemble from the Royal Shakespeare Company in 1987; Pinter's The Lover and Strindberg's The Stronger at the Battersea Arts Centre in 1997, and in 2008 at the MacOwan Theatre, Kensington, Pinter's Party Time and Celebration with students from the London Academy of Music and Dramatic Art. [25] [26] [27]

Billington lives in Chiswick with his wife, Jeanine Bradlaugh; they have one daughter. Billington is a supporter of the Labour Party. [4] [28]

In fiction, Billington's name was introduced in Death of a Hollow Man by Caroline Graham, later adapted as for the Midsomer Murders television mystery series, in which DCI Tom Barnaby coaxes deluded local director, and double murderer, Harold Winstanly into accompanying him to the police station by suggesting Michael Billington and journalists from various respectable publications would be waiting to discuss his work. [29]

Billington was made an Honorary Fellow of St Catherine's College, Oxford in 2005 [8] and was awarded an Honorary Doctorate by The University of Warwick in July 2009. [30]

He was appointed Officer of the Order of the British Empire (OBE) in the 2013 New Year Honours for services to the theatre. [31] 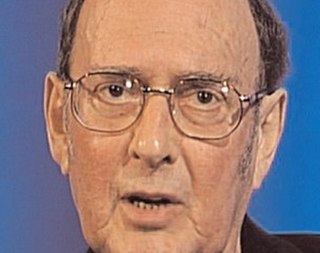 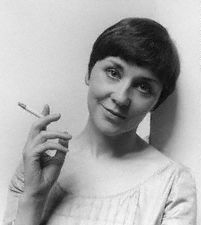 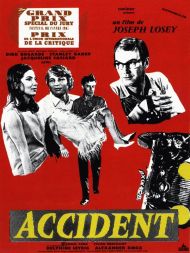 Accident is Harold Pinter's 1967 British dramatic film adaptation of the 1965 novel by Nicholas Mosley. Directed by Joseph Losey, it was the third of four collaborations between Pinter and Losey, the others being The Servant (1963), Modesty Blaise (1966) and The Go-Between (1971). At the 1967 Cannes Film Festival, it won the award for Grand Prix Spécial du Jury. It also won the prestigious Grand Prix of the Belgian Film Critics Association. 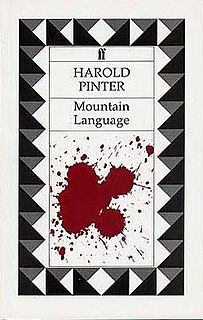 Mountain Language is a one-act play written by Harold Pinter, first published in The Times Literary Supplement (TLS) on 7–13 October 1988. It was first performed at the Royal National Theatre in London on 20 October 1988 with Michael Gambon and Miranda Richardson. Subsequently, it was published by Faber and Faber (UK) and Grove Press (USA). Mountain Language lasts about 25 minutes in production. It was most recently performed as part of Theatre of Menace (2016) at the Smock Alley Theatre in Dublin, starring Alisa Belonogina, Paul Carmichael, Lana O'Kell, Jaime Peacock, Louis Tappenden and Natasha Ryan 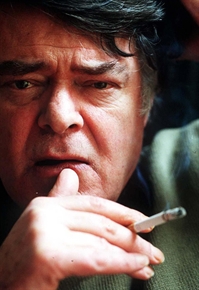 No Man's Land is a play by Harold Pinter written in 1974 and first produced and published in 1975. Its original production was at the Old Vic theatre in London by the National Theatre on 23 April 1975, and it later transferred to Wyndham's Theatre, July 1975 – January 1976, the Lyttelton Theatre April–May 1976, and New York October–December, returning to the Lyttelton, January–February 1977. It is a two act play. 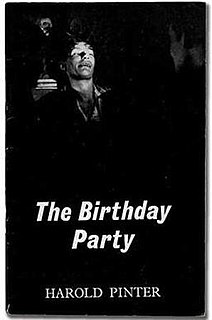 The Birthday Party (1957) is the first full-length play by Harold Pinter, first published in London by Encore Publishing in 1959. It is one of his best-known and most frequently performed plays. 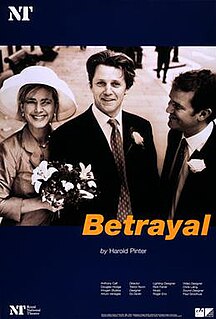 The Room is Harold Pinter's first play, written and first produced in 1957. Considered by critics the earliest example of Pinter's "comedy of menace", this play has strong similarities to Pinter's second play, The Birthday Party, including features considered hallmarks of Pinter's early work and of the so-called Pinteresque: dialogue that is comically familiar and yet disturbingly unfamiliar, simultaneously or alternatingly both mundane and frightening; subtle yet contradictory and ambiguous characterizations; a comic yet menacing mood characteristic of mid-twentieth-century English tragicomedy; a plot featuring reversals and surprises that can be both funny and emotionally moving; and an unconventional ending that leaves at least some questions unresolved.

Sir Harold Hobson was an English drama critic and author.

Bibliography for Harold Pinter is a list of selected published primary works, productions, secondary sources, and other resources related to English playwright Harold Pinter (1930–2008), the 2005 Nobel Laureate in Literature, who was also a screenwriter, actor, director, poet, author, and political activist. It lists works by and works about him, and it serves as the Bibliography for the main article on Harold Pinter and for several articles relating to him and his works.

Honours and awards to Harold Pinter lists honours, awards, prizes, and honorary degrees received by English playwright Harold Pinter (1930–2008), which often acknowledge his international importance and his reach beyond national and regional boundaries.

Harold Pinter and academia concerns academic recognition of and scholarship pertaining to Harold Pinter, CH, CBE (1930–2008), English playwright, screenwriter, actor, director, poet, author, political activist, and the 2005 Nobel Laureate in Literature, at the time of his death considered by many "the most influential and imitated dramatist of his generation."

"Art, Truth and Politics" is the Nobel Lecture delivered on video by the 2005 Nobel Laureate in Literature Harold Pinter (1930–2008), who was at the time hospitalised and unable to travel to Stockholm to deliver it in person.

Remembrance of Things Past is the 2000 collaborative stage adaptation by Harold Pinter and director Di Trevis of Harold Pinter's as-yet unproduced The Proust Screenplay (1977), a screen adaptation of À la recherche du temps perdu, the seven-volume novel by Marcel Proust.

The Dreaming Child is a screenplay by Harold Pinter (1930–2008), the 2005 Nobel Laureate in Literature, which he completed in 1997 and published in volume 3 of his Collected Screenplays (2000). It has not yet been filmed but was produced as a radio play by Feelgood Films for BBC Radio Four's Unmade Movies series in 2015. It is an adaptation of the short story "The Dreaming Child" by Danish author Karen Blixen. Pinter's manuscripts for this work are housed in The Harold Pinter Archive in the British Library.