The team was founded by Sacramento Kings co-owners Mark Mastrov and Andy Miller in November 2015. [2]

In March 2016 NRG announced that Alex Rodriguez, Shaquille O'Neal and Jimmy Rollins were joining as investors. [3] On April 20, 2018, Tiesto was announced as an investor. [4]

In September 2019, it was announced that Hector "H3CZ" Rodriguez had joined as co-CEO, [7] after another announcement the same day that Hector and the Immortals Gaming Club had parted ways. [8]

On February 11, 2019, NRG became one of the first organizations to sign a professional Apex Legends player with the signing of Coby "Dizzy" Meadows. [10] The team signed Brandon "Ace" Winn and Marshall "Mohr" Mohr in March and May, respectively, to round out its three-player squad. [11] [12] Dizzy competed in the first-ever Apex Legends Pro-Am, securing 1st place, the tournament's MVP award, and a $23,000 charitable donation to the V Foundation. [13] Following the retirement of Dizzy in December 2019, [14] [15] [16] the team picked up their new talent Joseph "Frexs" Sanchez in the beginning of January, about a month later. [17]

On August 3, NRG signed the members of the former Overwatch team Luminosity Gaming. [18] NRG owns the Overwatch League team San Francisco Shock, whose roster is listed below. NRG owned an Overwatch Contenders team competing as the Shock's academy team up until May 8, 2019, when they withdrew their participation in the tournament. [19]

NRG Esports signed the Kings of Urban roster after a strong finish in their region in RLCS Season 1 in 2016. [20] RLCS Season 2 saw NRG bow out of the RLCS finals after a loss to Flipsid3 Tactics, finishing 5-6th. In the off-season, GarrettG was picked up from his former team Orbit, replacing Sadjunior. This new roster achieved a 3rd-place finish in the RLCS Season 3 finals, losing out to the eventual champions in Northern Gaming. After a disappointing last-place finish in the RLCS Season 4 Finals, NRG dropped mainstay and fan-favorite Jacob for rookie prodigy jstn. With jstn, NRG came one goal away from becoming the Rocket League world champions in Season 5. After going undefeated in both regular season and the first two days of the RLCS tournament, NRG met Dignitas in the Grand Finals. Dignitas reset the bracket with a 4–1 win in the first best-of-seven, which meant one final series would crown the champs. In Game 7, NRG trailed by one goal in the final moments, but jstn scored a last-second goal to send the game into overtime, where they ultimately lost. NRG would continue to dominate RLCS regional play in seasons 6 and 7, only to fall short of expectations at both finals. Several days after the end of Season 7, NRG legend Fireburner announced he was stepping away from competitive Rocket League. Nearly a month later, it was announced that three-time RLCS champion Turbopolsa, a member of the same Dignitas team that defeated NRG for the world title in season 5, would replace Fireburner, becoming the first player to make a cross-region move from Europe to North America. Months after Turbopolsa's move to North America, NRG Esports would finally go on to win the Rocket League World Championship series on December 15, 2019, beating Renault Vitality in a seven-game Grand Finals with jstn scoring the winning goal in overtime. They would then drop Turbopolsa in order to sign SquishyMuffinz, a player coming from the recently disbanded team Cloud9. With this roster, they went on to win RLCS X North American Championship, and lose in the Grand Finals of Fall Major RLCS 11 to Team BDS. [21]

On 26 September 2019, the NRG roster was acquired by Evil Geniuses, ending the 4 year CS:GO campaign of the organization. [31]

NRG entered the Dragon Ball FighterZ scene in 2018 with the signing of Eduardo "HookGangGod" Deno. [32] His first win under the NRG banner was at Summit of Power 2018 where he took down SonicFox to take the title. [33] Eduardo was also featured in his very own docuseries on Sony Crackle called "Hook'D". The 4-part series featured a cameo appearance from Shaquille O'Neal and debuted on July 27, 2018. [34] NRG released HookGangGod on January 13, 2020. [35]

On September 1, 2016, NRG acquired defending Smite World Champions team Panthera. [36] The team joined the organization following a hugely successful first 12 months; qualifying for Worlds as European runners up before dropping just 2 games on their way to the title. They followed this up by going 24–4 in the Spring split to qualify for the Dreamhack Masters in June, dominating the tournament and going undefeated 8–0 to be crowned Champions. The team has most recently won the 2016-2017 Smite World Champions. On December 13, 2018, NRG officially ended their Smite division. [37]

OGN was a South Korean cable television channel that specialized in broadcasting video game-related content and esports matches, particularly StarCraft, Starcraft II, League of Legends, and Overwatch. OGN ran high level professional tournaments for 20 years; its premier competition included the Ongamenet Starleague (OSL), Proleague, League of Legends Champions Korea, and Overwatch APEX. It was previously a subsidiary of On-Media, the parent company of several other cable channels. After a corporate merger in 2010, it became a part of CJ ENM E&M Division.

Fnatic is a professional esports organization headquartered in London, United Kingdom. Founded 23 July 2004, the team has players from around the world, across a variety of games, such as Apex Legends, Counter-Strike: Global Offensive, Dota 2, FIFA, Heroes of the Storm, League of Legends, Valorant and Rainbow Six Siege.

Dignitas, formerly known as Team Dignitas, is a professional esports organization based in Newark, New Jersey, founded by Michael "ODEE" O'Dell on 9 September 2003 as a merger of two top Battlefield 1942 clans. Dignitas was acquired by the Philadelphia 76ers in September 2016. The team is best known for its League of Legends, Rocket League, and Counter-Strike: Global Offensive squads.

MOUZ, formerly mousesports, is a professional esports organisation based in Germany. It fields teams in several games but is particularly known for its CS:GO team. MOUZ was one of the founding members of the G7 Teams. MOUZ's League of Legends team currently competes in the ESL Pro Series, having formerly competed in the European Challenger Series.

Cloud9 Esports, Inc., or simply Cloud9 (C9), is an American professional esports company based in Santa Monica, California. The company was originally founded as a professional League of Legends team founded by Jack and Paullie Etienne in May 2013 and was incorporated into Cloud9 Esports, Inc. on September 6, 2016. Cloud9 has received US$78 million in total raised equity via venture capital funding and was ranked the world's second-most valuable esports organization in 2020.

Team Envy is an American esports franchise based in Dallas, Texas and is owned by Envy Gaming. Founded in 2007 as a professional Call of Duty team, they have since gone to field rosters in Counter-Strike, FIFA, Fortnite, Gears of War, Halo, League of Legends, Chess, Magic: the Gathering, Overwatch, Paladins, PUBG, Rocket League, SMITE, StarCraft, Super Smash Bros. and Street Fighter.

Splyce was a professional esports organization and media company based in Rochester, New York. Their League of Legends team was a franchise member of the LEC, Europe's top professional league for League of Legends. Splyce announced its rebranding from Follow eSports in November 2015. On November 29, 2019, Splyce's parent company, OverActive Media, announced it had merged Splyce with its other esports subsidiary, MAD Lions, and that all of Splyce's teams would henceforth compete under that name.

Immortals is a professional esports organization based in the United States owned by Immortals Gaming Club. It was founded on October 7, 2015, after the acquisition of Team 8's LCS spot.

Luminosity Gaming is a professional esports organization based in North America. It has teams competing in Call of Duty, Overwatch, Tom Clancy's Rainbow Six: Siege, Super Smash Bros., Fortnite and Apex Legends. The team was founded in Canada by Steve "Buyaka" Maida in 2015, and is based in Toronto, Ontario.

Noh Yeong-Jin, better known by his in-game name Gamsu, is a South Korean professional League of Legends player currently top laner for 100 Thieves Academy. He began his professional esports career with League of Legends, playing as a top laner for several teams, such as Fnatic, Team Dignitas, and Samsung Galaxy Blue. Noh transitioned to professional Overwatch in 2016, competing for CONBOX in the OGN APEX Series. With the inception of the Overwatch League in 2017, Noh signed with the Boston Uprising before being traded to the Shanghai Dragons a season later. After one season with the Dragons, Noh signed with the Dallas Fuel. In late 2020, Noh retired from competitive Overwatch to pursue a career in League of Legends again.

FlyQuest is a professional esports organization based in the United States that was founded on January 6, 2017. It is owned by Milwaukee Bucks co-owner Wesley Edens and Fortress Investment Group.

Misfits Gaming is a professional esports organization based in Boca Raton, Florida, with players competing in League of Legends, Overwatch, Call of Duty, and Fortnite. It was founded on 18 May 2016 by Ben Spoont, initially launching as a League of Legends Challenger Series team.

The Rocket League Championship Series (RLCS) is an annual Rocket League Esports tournament series produced by Psyonix, the game's developer. It consists of qualification splits in North America, South America, Europe, Oceania, Middle East/North Africa, Asia, and Sub-Saharan Africa, and culminates in a playoff bracket with teams from those regions. The qualification rounds are played as an online round-robin tournament and the finals are played live in different cities. The Season 9 championship in 2020 and the Season X championship in 2021 were cancelled due to the COVID-19 pandemic, with region-based championships in their places.

Brandon Larned, better known as Seagull, is an American video game streamer and retired professional Overwatch player. Early in the game's history, Larned established himself as one of the most popular Overwatch streamers on Twitch. As an esports competitor, Larned represented Luminosity Gaming and then NRG Esports, before leaving the active roster of the latter to resume streaming full-time. He returned to competitive play with Team EnVyUs shortly before its roster became the Dallas Fuel, one of the teams in the newly launched Overwatch League. At the end of the League's inaugural season, Larned once again announced that he would be stepping away from competitive play in favor of being a full-time streamer.

The Team Envy Overwatch team represented Team Envy, an American esports franchise, in the video game Overwatch. Originally competing under the name Team EnVyUs, the team won multiple regional and international competitions before being transferred to the Dallas Fuel franchise of the Overwatch League (OWL) by their parent organization, Envy Gaming. The franchise reestablished its Overwatch division in 2018 and currently competes in the North America West region of Overwatch Contenders (OWC) as an academy team for the Dallas Fuel. The division disbanded in April 2020. 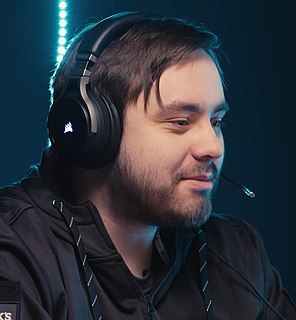