The Nashville Municipal Auditorium is an indoor sports and concert venue in Nashville, Tennessee, which also houses the Musicians Hall of Fame and Museum. Constructed in 1962, the Auditorium was the first public assembly facility in the Mid South with air conditioning. [1]

The NMA hosted the 1994 United States Gymnastic Championships as well as the 1996 Tour of World Figure Skating Championships. The Auditorium has hosted minor league hockey, with the teams known as the Dixie Flyers, South Stars, Knights, Nighthawks, and Nashville Ice Flyers. It has also hosted minor league basketball – the former Nashville Stars and Music City Jammers, and women's professional basketball – the Nashville Noise of the former (Women's) American Basketball League. It was a home court for the Belmont University basketball teams while Striplin Gym was demolished to make way for the Curb Event Center. Additionally, the NMA has hosted several Ohio Valley Conference basketball tournaments, and the Auditorium hosted the OVC again in 2008. From 2011 to 2015, the NMA again hosted the men's and women's OVC basketball tournaments in a new four-day tournament format, subsequently reduced back to a three-day affair featuring only the top eight teams for 2016 and 2017. The capacity is set around 8,000 during these tournaments. It currently hosts the annual Magnet Madness basketball game between rivals Hume-Fogg High School and Martin Luther King Magnet.

The Music City Stars, then known as the Nashville Broncs, an American Basketball Association expansion team, began its inaugural season at the NMA in November 2008.

The Professional Bull Riders association hosted a Built Ford Tough Series event at this venue from its inception in 1994 until 2001 (during this era the BFTS was known as the Bud Light Cup). In 2002, the event was moved to the Gaylord Entertainment Center (now the Bridgestone Arena). The NMA hosted Tuff Hedeman's CBR All-Star Shoot-Out on June 10, 2009 and again in 2010.

It is currently home to the Nashville Rollergirls, a flat track roller derby league, and a member of the Women's Flat Track Derby Association.

On November 6, 2013 the Professional Indoor Football League (PIFL) announced that an expansion team would bring indoor football back to the Nashville sports market. The Nashville Venom would begin PIFL play for the 2014 season in Municipal Auditorium. On July 12, 2014, the Venom won that year's PIFL Championship Game defeating the Lehigh Valley Steelhawks 64–43. [2] The team returned for a second season in 2015, after which the entire league folded.

Many Professional wrestling events were hosted in the arena including the NWA's Wrestle War 89 which featured a world title change and voted match of the year by PWI, Ric Flair versus Ricky Steamboat. It also was the home for the World Wrestling Federation's (WWF) No Holds Barred: The Match/The Movie pay-per-view (PPV) special held in December 1989 as well as the WWF's In Your House 2: The Lumberjacks in 1995. It was a favorite venue over the years for WCW, which hosted its Starrcade 1994, 1995 and 1996 in addition to its final Clash of the Champions XXXV show there in 1997, as well as its penultimate PPV event, SuperBrawl Revenge, in 2001.

Masato Tanaka won his only ECW Heavyweight Championship by defeating Mike Awesome at Municipal at an ECW on TNN taping in December 1999. Total Nonstop Action Wrestling held their first events there in June 2002 before moving to the Tennessee State Fairgrounds. The arena also hosted TNA Wrestling's Slammiversary (2007) and Lockdown (2012). The arena hosted the Ring of Honor event Honor for All.

In 1967, the auditorium hosted the Country Music Association's first CMA Awards event, before the ceremonies moved to the Ryman Auditorium the following year.

The walls of the upper and lower concourses are decorated with enlarged ticket stubs for events and concerts the auditorium has hosted between the venue's debut in 1962 and 2010.

President Donald Trump appeared on March 15, 2017 for a rally and speech. [4] According to a public address announcement in the venue, thousands more were unable to attend leaving empty seats in the upper level. This announcement was highly controversial as there was no evidence the upper level tickets were ever sold. [5]

Musicians' Hall of Fame and Museum

On June 4, 2013, the auditorium began housing the Musicians Hall of Fame and Museum. The museum was forced from its previous building as a result of the construction of the Music City Center. The Hall of Fame moved into the exhibition floor of the Nashville Municipal Auditorium. [6]

Bridgestone Arena is a multi-purpose venue in downtown Nashville, Tennessee United States. Completed in 1996, it is the home of the Nashville Predators of the National Hockey League.

Kiel Auditorium was an indoor arena located in St. Louis, Missouri. It was the home of the St. Louis University basketball team and hosted the NBA's St. Louis Hawks, from 1955 to 1968.

Allen Arena is an indoor arena at Lipscomb University in Nashville, Tennessee. The arena was named in honor of James C. and Linda Allen, the facility's primary benefactors. James Allen is a member of the board of trustees for the university and worked for the university at one time. The arena is primarily used for basketball and volleyball athletic events and is also used for daily chapel services and occasional concerts. 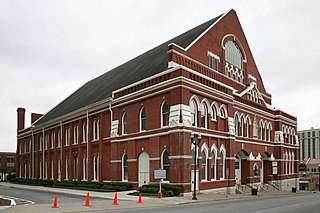 Denver Auditorium Arena was an indoor arena located at the corner of 13th and Champa Streets in Denver, Colorado. It was constructed as the Denver Municipal Auditorium in 1908 during the administration of Denver Mayor Robert W. Speer. The building was opened on July 7, 1908, and was the site of the 1908 Democratic National Convention.

The Main Street Armory is a multi-purpose arena located at 900 East Main Street in Rochester, New York. The Armory was built in 1905 by the United States Army and used for the training and processing of soldiers. Its main arena also hosted several non-military events, including high school basketball, circuses, and auto shows prior to the mid-1950s. In 1990, the New York National Guard left the facility, leaving it vacant and allowing it to fall into disrepair. It was purchased and renovated in the mid-2000s with the intention of refurbishing the Armory's main arena to hold events once again. The building opened for this purpose on February 3, 2007.

The 2008 Ohio Valley Conference Men's Basketball Tournament took place from March 4–8, 2008. The first round was hosted by the better seed in each game. The semifinals and finals took place at Nashville Municipal Auditorium in Nashville, Tennessee. Austin Peay won the tournament advanced to the NCAA Tournament. 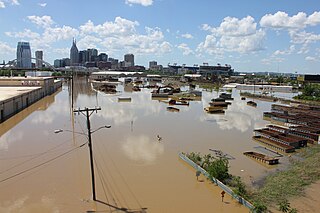 The May 2010 Tennessee floods were 1,000-year floods in Middle Tennessee, West Tennessee, south-central and western Kentucky and northern Mississippi areas of the United States of America as the result of torrential rains on May 1 and 2, 2010. Floods from these rains affected the area for several days afterwards, resulting in a number of deaths and widespread property damage.

The Nashville Venom were a professional indoor football team, one of eight franchises of the Professional Indoor Football League (PIFL). Based in Nashville, Tennessee, the Venom were members of the American Conference. The team began play in 2014 as an expansion team. The team played at Nashville Municipal Auditorium in Nashville, which opened in 1962.

The 2014 Professional Indoor Football League season was the third season of the Professional Indoor Football League (PIFL). The regular season began March 29, 2014, and ended on June 28, 2014. Each team played a 12-game schedule. The top 2 teams in each conference advanced to the playoffs that began on July 5. The final was played July 12, with the Nashville Venom defeating the Lehigh Valley Steelhawks to win their first league championship.

The 2014 Nashville Venom season was the first season as a professional indoor football franchise and their first in the Professional Indoor Football League (PIFL). The Venom were of eight teams competing in the PIFL for the 2014 season.

Phillip Barnett is an American football wide receiver who is currently a free agent, most recently for the Washington Valor of the Arena Football League (AFL). He played college football at the University of Toledo.