Historically, North Korea's participation in international sporting events has been hindered by the relations with South Korea. Until the 1990s, North Korea used to host up to 14 international events every year, albeit in small scale. Since the early 1990s, the amount was reduced to just one, the Paektusan Prize International Figure Skating Festival. More recently, since the 2000s, North Korea both participates in and hosts more international competitions.

The North Korean national ice hockey team is the national men's ice hockey team of the Democratic People's Republic of Korea, and represent the country in IIHF competition. They withdrew from the 2007 World Championships, and therefore were automatically relegated to Division III in the 2008 edition, where they finished first. They then played in Division II during the 2009 edition, and finished last bringing them back down to Division III for 2010. They are currently ranked 41st in the IIHF World Rankings.

The DPR Korea Premier Football League is a North Korean association football league that serves as the top-tier of the North Korean football league system. As of the 2017–18 season, featuring thirteen teams that play a full season of home-and-away matches. The current season started on 1 December 2018 and will continue until October 2019. April 25 leads all clubs in titles, with 19.

April 25 Sports Club, or 4.25 SC for short, or sometimes "April 25 National Defence Sports Club", is a multi-sports club in North Korea based in P'yŏngyang, primarily known outside of North Korea for its men's and women's football teams. The club belongs to the Ministry of People's Armed Forces; all members of the professional teams are considered officers of the Army.

Amnokgang Sports Club is a North Korean multi-sports club based in Pyongyang. 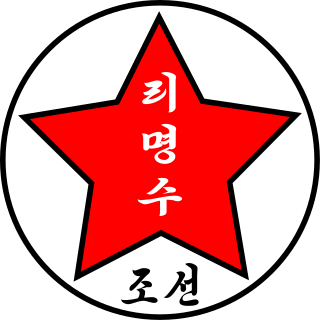 Rimyŏngsu Sports Club is a North Korean football club, based in Sariwŏn. Despite never winning the DPR Korea League, Rimyŏngsu supplied four players to the 2005 FIFA U-17 World Championship and five players to the 2007 FIFA U-20 World Cup, more than any other North Korean club. Like the Amrokkang Sports Club, Rimyŏngsu is affiliated with the Ministry of People's Security. It was named after General Ri Myŏng-su.

Sobaeksu Sports Club is a North Korean multi-sports club based in Pyongyang, best known for its men's and women's football teams playing at Yanggakdo Stadium.

The Icehouse is an Australian ice sports and entertainment centre, located in the Docklands precinct of Melbourne, in Victoria, Australia. It is open to the public 7 days a week and offers an extensive range of educational ice-skating classes for customers, as well as pathways to ice sports.

Choe Yong-rim is a North Korean politician. He was the Premier of North Korea from June 2010 to April 2013 and Workers' Party of Korea central committee presidium member since September 2010. He has been described by The New York Times as a "KWP insider" and a "friend of Kim Jong-Il's family." He is honorary vice-president of the Presidium of the Supreme People's Assembly, the country's parliament.

The Malaysian Ice Hockey League is the national ice hockey league in Malaysia. It was first contested in 2002.

The Chinese Ice Hockey Championship is the national ice hockey championship in China. It was founded in 1953. It is made up solely of amateur teams. A number of professional Chinese teams have participated in Asia League Ice Hockey, the most recent one being China Dragon from 2008 until 2017. In 2016, Kunlun Red Star was founded and joined the Kontinental Hockey League as an expansion team.

The Pyongyang Circus is a multi-function building located in Pyongyang, North Korea. It was completed in 1989.

Statistics of DPR Korea Football League in the 2016 season.

Statistics of DPR Korea Football League in the 2015 season.

The 2016 Hwaebul Cup was the fourth edition of the Hwaebul Cup celebrating North Korea's Youth Day. The competition was held between 27 July and 28 August 2016, with all matches played at the Sŏsan Stadium in P'yŏngyang. The competition was arranged in two phases, a group stage followed by a single-elimination play-off semi-finals, and a single-game final. April 25 won the title for the fourth straight time.