Patricia Edwina Victoria Knatchbull, 2nd Countess Mountbatten of Burma, CBE , MSC , CD (née Mountbatten; 14 February 1924 – 13 June 2017), was a British peeress and the third cousin of Queen Elizabeth II. She was the elder daughter of heiress Edwina Ashley, a patrilineal descendant of the Earls of Shaftesbury, first ennobled in 1661, and Admiral of the Fleet the 1st Earl Mountbatten of Burma. She was the elder sister of Lady Pamela Hicks, first cousin to Prince Philip, Duke of Edinburgh, and the last surviving baptismal sponsor to Prince Charles, Prince of Wales.

Lady Mountbatten succeeded her father when he was assassinated in 1979, as his peerages had been created with special remainder to his daughters and their heirs male. This inheritance accorded her the title of countess and a seat in the House of Lords, where she remained until 1999, when the House of Lords Act 1999 removed most hereditary peers from the House.

On 26 October 1946 she married the 7th Baron Brabourne (9 November 1924 – 23 September 2005), at the time an aide to her father in the Far East. The wedding took place at Romsey Abbey in the presence of members of the Royal Family. Her bridesmaids were Princess Elizabeth, Princess Margaret, Lady Pamela Mountbatten, the bride's younger sister, and Princess Alexandra, daughter of the Duke and Duchess of Kent. [2]

Later they became one of the few married couples each of whom held a peerage in their own right, and whose descendants inherited titles through both. They had eight children and 18 grandchildren:

Mountbatten was educated in Malta, England, and at the Hewitt School [9] in New York City. In 1943, at age 19, she entered the Women's Royal Naval Service as a Signal Rating and served in Combined Operations bases in Britain until being commissioned as a third officer in 1945 and serving in the Supreme Allied Headquarters, South East Asia. This is where she met Lord Brabourne, who was an aide to her father. In 1973 she was appointed Deputy Lieutenant for the County of Kent; she was also a serving magistrate and was involved with numerous service organisations including SOS Children's Villages UK, of which she was a Patron; the Order of St John, of which she was a Dame; and the Countess Mountbatten's Own Legion of Frontiersmen of the Commonwealth, of which she was a Patron.

On 15 June 1974, she succeeded her distant cousin Lady Patricia Ramsay, formerly HRH Princess Patricia of Connaught, as Colonel-in-Chief of Princess Patricia's Canadian Light Infantry, for whom the regiment was named when Princess Patricia's father, the Duke of Connaught, was Governor General of Canada during the First World War. Despite her succeeding to an earldom in her own right as Countess Mountbatten of Burma on the death of her father in 1979, she preferred that the officers and men of her regiment address her as Lady Patricia. She was succeeded by The Right Honourable Adrienne Clarkson on 17 March 2007. On 28 August 2007, the Governor General of Canada presented her with the Canadian Meritorious Service Cross for her services as Colonel-in-Chief of Princess Patricia's Light Infantry.

Brabourne was in the boat which was blown up by the IRA off the shores of Mullaghmore, County Sligo in August 1979, killing her 14 year-old son Nicholas; her father; her mother-in-law, the Dowager Baroness Brabourne; and 15 year-old Paul Maxwell, a boat-boy from County Fermanagh. She, her husband, and their son Timothy were injured but survived the attack. Following the incident the Countess became Patron and later, President of The Compassionate Friends, a self-help charitable organisation of bereaved parents in the UK.

In June 2012, at the time of Queen Elizabeth II's first visit to the Republic of Ireland, Mountbatten said the Queen had her full support for meeting Martin McGuinness, who had been a high-ranking member of the IRA. "I think it's wonderful ... I'm hugely grateful that we have come to a point where we can behave responsibly and positively", she said. [10] In September 2012, she unveiled a memorial to the work of the Combined Operations Pilotage Parties at Hayling Island in Hampshire. [11]

As Lady Brabourne during her father's lifetime, her immediate family became closely involved in the consideration of a future consort for her first cousin once-removed, Charles, Prince of Wales. In early 1974, Lord Mountbatten began corresponding with the eldest son of Queen Elizabeth II and Prince Philip about a potential marriage to Lady Brabourne's daughter, Amanda. [12] Charles wrote to Lady Brabourne (who was also his godmother), about his interest in her daughter, to which she replied approvingly, though suggesting that a courtship was premature. [13] Amanda Knatchbull declined the marriage proposal of Charles in 1980, following the assassination of her grandfather. [14]

Countess Mountbatten died at her home in Mersham, Kent, aged 93. Her funeral service took place on 27 June 2017 at St Paul's Church, Knightsbridge, and was attended by the Queen, the Duke of Edinburgh and other senior members of the royal family. Her casket was borne by a party of pall bearers from Princess Patricia's Canadian Light Infantry, who were in London on public duties. She was buried at her home in Mersham. [15]

Mountbatten was born the daughter of a younger son of a marquess (1st Marquess of Milford Haven, formerly Prince Louis Alexander of Battenberg) and thus had no courtesy title. She became the daughter of a peer (when her father was created a viscount), and thus obtained the courtesy prefix Honourable. When she married a baron, she obtained her husband's precedence, which happened to be higher than that of a viscount's daughter. When her father was raised to an earldom, however, her precedence remained the same, because the higher courtesy rank of an earl's daughter cannot be claimed by the wife of a man who ranks as a peer in his own right. When her father died and she succeeded him as countess by special remainder, Patricia Mountbatten became a peeress in her own right. Since her peerage was higher than her husband's, she was entitled to enjoy its higher title and precedence. By contrast, her younger sister's rank as an earl's daughter outranked her husband's status as a commoner from August 1946 to August 1979 because when a peer's daughter marries a commoner rather than a peer, she is allowed to retain the rank derived from her parent.

Princess Patricia of Connaught was a granddaughter of Queen Victoria. Upon her marriage to Alexander Ramsay, she relinquished her title of a British princess and the style of Royal Highness. 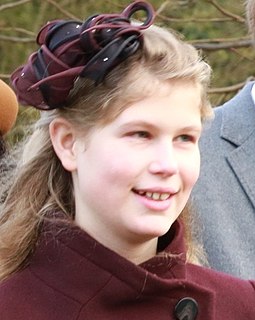 Lady Louise Windsor is the elder child and only daughter of Prince Edward, Earl of Wessex, and Sophie, Countess of Wessex. She is the youngest granddaughter of Queen Elizabeth II and Prince Philip, Duke of Edinburgh. She is 13th in the line of succession to the British throne.

Baron Brabourne, of Brabourne in the County of Kent, is a title in the Peerage of the United Kingdom. It was created in 1880 for the Liberal politician Edward Knatchbull-Hugessen, the second son of Sir Edward Knatchbull, 9th Baronet, of Mersham Hatch. He had previously represented Sandwich in the House of Commons and served as Under-Secretary of State for Home Affairs and Under-Secretary of State for the Colonies. Lord Brabourne had assumed by Royal licence the additional surname of Hugessen in 1849. His son, the second Baron, represented Rochester in Parliament as a Liberal. 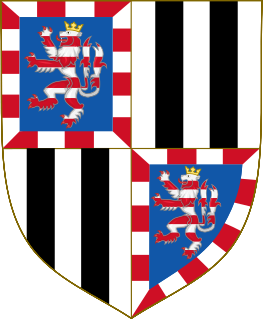 John Ulick Knatchbull, 7th Baron Brabourne,, professionally known as John Brabourne, was a British peer, television producer and Oscar-nominated film producer. Married to a daughter of the 1st Earl Mountbatten, Brabourne was a survivor of the bombing which killed his father-in-law, mother and son. 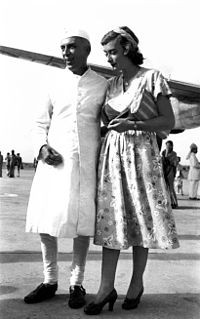 Lady Pamela Carmen Louise Hicks, DCVO is a British aristocrat. She is the younger daughter of the 1st Earl Mountbatten of Burma by his wife, Edwina Mountbatten. Through her father, Lady Pamela is a first cousin of Prince Philip, Duke of Edinburgh, and a great niece of the last Empress of Russia, Alexandra Feodorovna.

The wedding of Princess Elizabeth and Philip Mountbatten took place on 20 November 1947 at Westminster Abbey in London. Philip had been made Duke of Edinburgh on the morning of the wedding.

Lady Amanda Patricia Victoria Ellingworth is a British social worker. Her earlier career was in UK social work, specialising in children's services and child protection. She has since held a portfolio of chair roles or directorships, working with vulnerable people, especially children. Among other organisations she is currently a director of Plan International, Barnardo's, and Great Ormond Street Hospital. Her previous roles include: Chair of The Caldecott Foundation, chair of The Guinness Partnership, founding chair of Guinness Care and Support, and Deputy Chair of Yeovil Hospital. 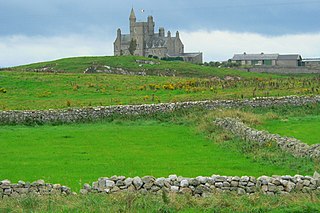 Classiebawn Castle is a country house built for The 3rd Viscount Palmerston (1784–1865) on what was formerly a 10,000-acre (4,000 ha) estate on the Mullaghmore peninsula near the village of Cliffoney, County Sligo, in the Republic of Ireland. The current castle was largely built in the late 19th century.

Penelope Meredith Mary Knatchbull, Countess Mountbatten of Burma,, known until 2005 as Lady Romsey, and until 2017 as The Lady Brabourne, is the wife of The Rt. Hon Norton Louis Philip Knatchbull, 3rd Earl Mountbatten of Burma, and a British peeress. High Steward of Romsey since 2011. Founder of the Leonora Children's Cancer Fund, now the Edwina Mountbatten and Leonora Children's Foundation. President of The Compassionate Friends. Patron of Countess Mountbatten's Own Legion of Frontiersmen of the Commonwealth. Patron or President of various other local organisations and charities. She shared the running of the Broadlands Estates and family businesses with her husband until she took over the enterprises full time when he was diagnosed with Alzheimer's.