A professional golfer is somebody who receives payments or financial rewards in the sport of golf that are directly related to their skill or reputation. A person who earns money by teaching or playing golf is traditionally considered a "golf pro," most of whom are teachers/coaches. The professional golfer status is reserved for people who play, rather than teach, golf for a career. [1]

Historically, the distinction between amateur and professional golfers had much to do with social class. In 18th and 19th century Britain, golf was played by the rich, for pleasure. The early professionals were working-class men who made a living from the game in a variety of ways: caddying, greenkeeping, clubmaking, and playing challenge matches. When golf arrived in America at the end of the 19th century, it was an elite sport there, too. Early American golf clubs imported their professionals from Britain. It was not possible to make a living solely from playing tournament golf until some way into the 20th century (Walter Hagen is sometimes considered to have been the first man to have done so).

In the developed world, the class distinction is now almost entirely irrelevant. Golf is affordable at public courses to a large portion of the population, and most golf professionals are from middle-class backgrounds, which are often the same sort of backgrounds as the members of the clubs where they work or the people they teach the game, and educated to university level. Leading tournament golfers are very wealthy; upper class in the modern U.S. usage of the term. However, in some developing countries, there is still a class distinction. Often golf is restricted to a much smaller and more elite section of society than is the case in countries like the United States and the United Kingdom. Professional golfers from these countries are quite often from poor backgrounds and start their careers as caddies, for example, Ángel Cabrera of Argentina, and Zhang Lian-wei who is the first significant tournament professional from the People's Republic of China. In various countries, Professional Golfers' Associations (PGAs) serve either or both of these categories of professionals. There are separate LPGAs (Ladies Professional Golf Associations) for women.

Under the rules of golf and amateur status, except for hole in one prizes, the maximum value of a prize an amateur can accept is £500, [2] or $750. [3] If an amateur accepts a prize of greater than this they forfeit their amateur status, and are therefore by definition a professional golfer.

Professional golfers are divided into two main groups, with a limited amount of overlap between them:

In the United States, the PGA of America has 31 distinct member classifications for professionals. Many of the classifications also have corresponding apprenticeship positions. [6]

The Professional Golfers' Association of America is an American organization of golf professionals that was founded in 1916. Consisting of nearly 29,000 men and women members, the PGA of America's undertaking is to establish and elevate the standards of the profession and to grow interest and participation in the game of golf.

The United States Open Championship, commonly known as the U.S. Open, is the annual open national championship of golf in the United States. It is the third of the four major championships in golf, and is on the official schedule of both the PGA Tour and the European Tour. Since 1898 the competition has been 72 holes of stroke play, with the winner being the player with the lowest total number of strokes. It is staged by the United States Golf Association (USGA) in mid-June, scheduled so that, if there are no weather delays, the final round is played on the third Sunday. The U.S. Open is staged at a variety of courses, set up in such a way that scoring is very difficult, with a premium placed on accurate driving. As of 2022, the U.S. Open awards a $17.5 million purse, the largest of all four major championships.

Golf instruction is the art of equipping and training golfers to play better golf through improved awareness of swing cause and effects as a result of the actions by their body, the club, and their effect on the golf ball. Most great golfers have a few common elements that make them great including: proper intentionality, swing repeatability to produce an action that fits the golfers intentionality, and a strong level of automaticity for long lasting enjoyment of the game golf. 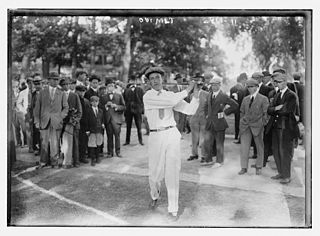 Francis DeSales Ouimet was an American amateur golfer who is frequently referred to as the "father of amateur golf" in the United States. He won the U.S. Open in 1913 and was the first non-Briton elected Captain of the Royal and Ancient Golf Club of St Andrews. He was inducted into the World Golf Hall of Fame in 1974. 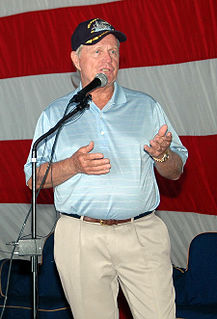 Walter Charles Hagen was an American professional golfer and a major figure in golf in the first half of the 20th century. His tally of 11 professional majors is third behind Jack Nicklaus (18) and Tiger Woods (15). Known as the "father of professional golf," he brought publicity, prestige, big prize money, and lucrative endorsements to the sport. Hagen is rated one of the greatest golfers ever.

The Professional Golfers' Association (PGA) is the professional body which represents the interests of teaching and club golf professionals in the United Kingdom and the Republic of Ireland. It was established in 1901 and is based at The Belfry near Birmingham, England. It has a membership of over 7,500 professionals with 1,500 working overseas in more than 70 countries worldwide. Since 2017 the chairman of the board has been Alan White, club professional at Lanark Golf Club.

James Bennett Elliott Ferrier was an Australian professional golfer from Manly, New South Wales. After compiling a fine record as an amateur golfer in Australia during the 1930s, he moved to the United States in 1940, turned professional in 1941, and joined the U.S. PGA Tour. He won the PGA Championship in 1947, among his 18 Tour titles, and was the first Australian and first golfer from the southern hemisphere to win a professional golf major title. Ferrier became an American citizen in 1944.

John Matthew Shippen Jr. was an American golfer who competed in several of the early U.S. Opens. Born in Washington D.C., he was the son of a former slave and Presbyterian minister, John Shippen Sr. and Eliza Spotswood Shippen, and is believed to be the first American-born golf professional.

Frank Richard Stranahan was an American sportsman. He had significant success in both amateur and professional golf. He was ranked number one in his weight class in powerlifting, from 1945 to 1954, and he became known on the golf course and off as the "Toledo strongman" long before the modern game of golf and fitness. After he retired from tournament golf in the early 1960s, he became a prolific long-distance runner, competing in 102 marathons.

The rules of golf consist of a standard set of regulations and procedures by which the sport of golf should be played. They are jointly written and administered by The R&A and the United States Golf Association (USGA). The R&A is the governing body of golf worldwide except in the United States and Mexico, which are the responsibility of the USGA. The rule book, entitled Rules of Golf, is updated and published on a regular basis and also includes rules governing amateur status.

David T. Pelz is an American golf coach, known for his expertise and published writing on the art of the short game, particularly putting.

Walter George Fovargue was an American professional golfer, club maker, and golf course architect. In 1916, he was one of the founding members of the PGA of America. He won the 1917 Northwest Open and finished fourth in the 1912 Western Open. He finished T13 in the 1906 and 1916 U.S. Opens and played in the inaugural PGA Championship in 1916 but lost in the first round.

Wikimedia Commons has media related to Golfers .
This page is based on this Wikipedia article
Text is available under the CC BY-SA 4.0 license; additional terms may apply.
Images, videos and audio are available under their respective licenses.