The Jack Nicklaus Museum is a museum focused on and honoring championship golfer Jack Nicklaus. It is on the campus of the golfer's alma mater of Ohio State University in his hometown of Columbus, Ohio. [1]

The museum, opened in 2002, is a 24,000-square-foot (2,200 m2) facility offering a comprehensive view of Nicklaus' life and career in and out of golf as well as exhibits celebrating the history and legends of the game. In 2005, it was transferred by the private Jack Nicklaus Museum Inc. to Ohio State University. [2]

It houses three theaters, a golf shop and a number of exhibit galleries. [2] 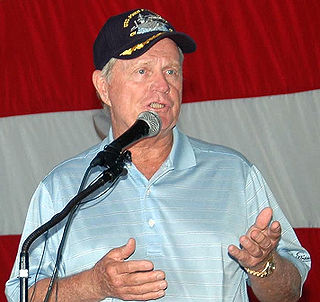 Jack William Nicklaus, nicknamed The Golden Bear, is an American retired professional golfer. He is widely considered to be either the greatest or one of the greatest golfers of all time. He won 117 professional tournaments in his career. Over a quarter-century, he won a record 18 major championships, three more than second-placed Tiger Woods. Nicklaus focused on the major championships—the Masters Tournament, U.S. Open, Open Championship and PGA Championship—and played a selective schedule of regular PGA Tour events. He competed in 164 major tournaments, more than any other player, and finished with 73 PGA Tour victories, third behind Sam Snead (82) and Woods (82).

Muirfield Village is an “upscale” golf-oriented community in the central United States, located in Dublin, Ohio, a suburb north of Columbus.

The Memorial Tournament is a PGA Tour golf tournament founded in 1976 by Jack Nicklaus. It is played on a Nicklaus-designed course at Muirfield Village Golf Club in Dublin, Ohio, a suburb north of Columbus. The golf course passes through a large neighborhood called Muirfield Village, which includes a 1999 bronze sculpture of Nicklaus mentoring a young golfer located in the wide median of Muirfield Drive.

The Honda Classic is a professional golf tournament on the PGA Tour in south Florida. It was founded in 1972 as Jackie Gleason's Inverrary Classic, and prior to a schedule change in 2021 was frequently the first of the Florida events in late winter following the "West Coast Swing."

The British Golf Museum is located opposite the clubhouse of the Royal and Ancient Golf Club in St Andrews, Scotland. The R&A owns and operates the museum.

Dow Henry Finsterwald, Sr. is an American retired professional golfer who is best known for winning the 1958 PGA Championship. He won 11 Tour titles between 1955 and 1963, played on four Ryder Cup teams, and served as non-playing captain for the 1977 U.S. Ryder Cup team.

The Ohio State University Golf Club is located at 3605 Tremont Road, Upper Arlington, Ohio, a suburb of Columbus. It was founded by L.W. St. John,. The golf club has two classical golf courses called Scarlet and Gray. The Scarlet was completed in 1938 and the Gray was finished later in 1940. The dedication ceremony was held on May 18, 1940, when Bob Kepler, Chick Evans, Blanche Sohl, and Patty Berg played 18 holes on the Scarlet course.

The Nationwide Children's Hospital Championship is a golf tournament on the Korn Ferry Tour. It was played for the first time in July 2007 at The Ohio State University Golf Club's Scarlet Course in Upper Arlington, Ohio. Jack Nicklaus, a former Ohio State golfer and Upper Arlington native, serves as honorary host of the event.

The Ohio Kings Island Open was a golf tournament on the PGA Tour from 1973 to 1977. It was played at Jack Nicklaus Golf Center in Mason, Ohio. The tournament was dropped when the LPGA Championship moved there in 1978.

The 1962 U.S. Open was the 62nd U.S. Open, held June 14–17 at Oakmont Country Club in Oakmont, Pennsylvania, a suburb northeast of Pittsburgh. Jack Nicklaus defeated 1960 champion Arnold Palmer in an 18-hole Sunday playoff that marked the beginning of their legendary rivalry. For Nicklaus, it was his first professional win, the first of four U.S. Open titles and a record 18 major championships. Though just 22, it was Nicklaus' sixth U.S. Open and tenth major, having played in four Masters. He had won the U.S. Amateur twice and was the top amateur at the previous two Opens, placing second to Palmer in 1960 and fourth in 1961.

John Frederick "Jack" Grout was an American professional golfer who competed on the PGA Tour from 1931 to 1953. Though he taught many Hall of Fame players, he is best known as the 'first and only' golf teacher of Jack Nicklaus. He was inducted into the Golf Magazine World Golf Teachers Hall of Fame in 2016.

Broadmoor Golf Club is a private golf club in the northwest United States in Seattle, Washington, founded in 1924 and opened for play in April 1927. It is located in the Broadmoor neighborhood of Seattle, just south of the University of Washington and west of Lake Washington.

The Portland Open Invitational was a professional golf tournament in the northwest United States on the PGA Tour, played in Portland, Oregon. Established by Robert A. Hudson with a $10,000 purse in 1944, it was played from 1944 to 1948 and again from 1959 to 1966. The event was hosted eight times at the Portland Golf Club, and four times at the Columbia Edgewater Country Club. First played as the Portland Open, the revived 1959 event played as the Portland Centennial Open Invitational, in honor of Oregon's centennial of statehood.

Jack Nicklaus Golf & Course Design: Signature Edition is a 1992 golf video game developed by Sculptured Software and published by Accolade for MS-DOS. It is part of a series of games named after golfer Jack Nicklaus, and follows Jack Nicklaus' Unlimited Golf & Course Design (1990). Like its predecessor, the game includes a golf course designer that allows the player to create customized courses. Two add-on disks provide additional courses. In 1995, both disks were re-released along with Signature Edition as a compilation titled Jack Nicklaus: The Tour Collection.

Bo Hoag is an American professional golfer who plays on the PGA Tour. Hoag began golfing at an early age and grew up a few blocks from renowned golfer Jack Nicklaus's boyhood home. He was named the 2006 Ohio Player of the Year and was the 2006 Division I Ohio High School individual medalist on Upper Arlington High School's Division I state championship team. After playing collegiate golf at Ohio State University and a season on the PGA Tour Canada, Hoag won the 2019 WinCo Foods Portland Open on the Korn Ferry Tour to clinch his PGA Tour card.