Ricardian economics are the economic theories of David Ricardo, an English political economist born in 1772 who made a fortune as a stockbroker and loan broker. [1] [2] At the age of 27, he read An Inquiry into the Nature and Causes of Wealth of Nations by Adam Smith and was energized by the theories of economics.

His main economic ideas are contained in On the Principles of Political Economy and Taxation (1817). This set out a series of theories which would later become theoretical underpinnings of both Marx's Das Kapital and Marshallian economics, including the theory of economic rent, the labour theory of value and above all the theory of comparative advantage.

Ricardo wrote his first economic article ten years after reading Adam Smith and ultimately, the "bullion controversy" gave him fame in the economic community for his theory on inflation in 19th-century England. This theory became known as monetarism, the theory that excess currency leads to inflation. [1] He also played a part in the emergence of classical economics, [3] which meant he fought for free trade [4] and free competition without government interference by enforcing laws or restrictions. [2]

The law of diminishing returns

Another idea Ricardo is known for in his Essay on the Influence of a Low Price of Corn on the Profits of Stock is the Law of Diminishing Returns [5] (Ricardo, Economic Essays, Henderson 826). The law of diminishing returns states that if you add more units to one of the factors of production and keep the rest constant, the quantity or output created by the extra units will eventually get smaller to a point where overall output will not rise ("diminishing returns").

For example, consider a simple farm that has two inputs: labor and land. Suppose the farm has 100 hectares of land and one worker (the labor input). This land-labor combination produces some level of output. If the amount of land is increased, and the amount of labor stays the same, the worker will have to give less attention to each acre of land (provided that nothing else changes). So, output may increase, though the additional (marginal) output from adding an acre of land may decrease.

If more and more land is added that must be tended by this one worker, there will eventually be so much land that output starts to decrease as the worker becomes overwhelmed (that is, less labor time, on average, is devoted to each acre). This is the typical stylized result of increasing one productive input while holding the others constant (versus increasing all inputs, generating economies of scale).

Ricardo was opposed to tariffs and other restrictions on international trade. Ricardo devised an idea that is well known as the theory of comparative advantage (Henderson 827, Fesfeld 325). According to the Washington Council on International Trade, comparative advantage is the ability to produce a good at a lower cost, relative to other goods, compared to another country. In the Principles of Economics, Ricardo states that comparative advantage is a specialization technique used to create more efficient production (52) and describes opportunity cost between producers (53). With perfect competition and undistorted markets, countries tend to export goods in which they have a comparative advantage.

Though David Ricardo was of the 19th century, many people use his work in everyday economics. Ricardo's theory on economic rent consisted mostly of an agricultural model featuring farmers and landowners. Since highly productive land was desired for more crops and the market would pay the same price for crops grown on both favorable and unfavorable land, farmers were eager to pay more for highly productive land to grow more crops for the extra money (Henderson 827).

Ricardo also had another influential theory: minimum wages. He knew that once the population rose more greatly, the demand for jobs would increase, making the wages decrease to a level that would not support people because many were willing to take the low-paying jobs to survive (St. Clair 9, Fusfeld 325). This observation of minimum wage work is especially relevant today when looking at the controversy with the enforcement of a minimum wage law. In Ricardo's book, On the Principles of Political Economy and Taxation , he is saying that the jobs we give more value to are paid better than those we do not value as much (11-2).

To Ricardo, value had much to do with the cost of production, which included wages and profit (St. Clair 27) and how much you paid a worker affected the price you put on the item. He also believed the value of a product was related to the quality of labor necessary for the production (Principles of Political 5). An example of this would be paying a slightly higher price for an item that is handmade, rather than being manufactured. Though this is true, Ricardo also thought the labor or machine itself should be considered when selling an item and that a little of every item should be priced to include this factor of labor (St. Claire 24).

Ricardo addressed many of the issues we face today in our economic world, such as minimum wage and rent (Fusfeld 325). These issues are perhaps as important today as they were in the 19th century, which is why David Ricardo's economic theories are still an important part of modern economics.

David Ricardo was a British political economist, one of the most influential of the classical economists along with Thomas Malthus, Adam Smith and James Mill. He was also a politician, and a member of the Parliament of Great Britain and Ireland.

In an economic model, agents have a comparative advantage over others in producing a particular good if they can produce that good at a lower relative opportunity cost or autarky price, i.e. at a lower relative marginal cost prior to trade. Comparative advantage describes the economic reality of the work gains from trade for individuals, firms, or nations, which arise from differences in their factor endowments or technological progress.

The neo-Ricardian school is an economic school of thought that derives from the close reading and interpretation of David Ricardo by Piero Sraffa, and from Sraffa's critique of neoclassical economics as presented in his The Production of Commodities by Means of Commodities, and further developed by the neo-Ricardians in the course of the Cambridge capital controversy. It particularly disputes neoclassical theory of income distribution. 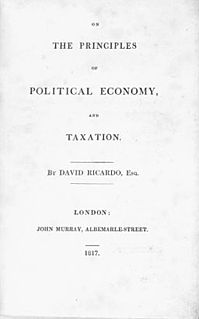 On the Principles of Political Economy and Taxation is a book by David Ricardo on economics. The book concludes that land rent grows as population increases. It also presents the theory of comparative advantage, the theory that free trade between two or more countries can be mutually beneficial, even when one country has an absolute advantage over the other countries in all areas of production.

The Heckscher–Ohlin model is a general equilibrium mathematical model of international trade, developed by Eli Heckscher and Bertil Ohlin at the Stockholm School of Economics. It builds on David Ricardo's theory of comparative advantage by predicting patterns of commerce and production based on the factor endowments of a trading region. The model essentially says that countries export the products which use their relatively abundant and cheap factors of production, and import the products which use the countries' relatively scarce factors.

New trade theory (NTT) is a collection of economic models in international trade theory which focuses on the role of increasing returns to scale and network effects, which were originally developed in the late 1970s and early 1980s. The main motivation for the development of NTT was that, contrary to what traditional trade models would suggest, the majority of the world trade takes place between countries that are similar in terms of development, structure, and factor endowments.

The tendency of the rate of profit to fall (TRPF) is a theory in the crisis theory of political economy, according to which the rate of profit—the ratio of the profit to the amount of invested capital—decreases over time. This hypothesis gained additional prominence from its discussion by Karl Marx in Chapter 13 of Capital, Volume III, but economists as diverse as Adam Smith, John Stuart Mill, David Ricardo and Stanley Jevons referred explicitly to the TRPF as an empirical phenomenon that demanded further theoretical explanation, although they differed on the reasons why the TRPF should necessarily occur.

In economics, gains from trade are the net benefits to economic agents from being allowed an increase in voluntary trading with each other. In technical terms, they are the increase of consumer surplus plus producer surplus from lower tariffs or otherwise liberalizing trade.

Ricardian socialism is a branch of classical economic thought based upon the work of the economist David Ricardo (1772–1823). The term is used to describe economists in the 1820s and 1830s who developed a theory of capitalist exploitation from the theory developed by Ricardo that stated that labor is the source of all wealth and exchange value. This principle extends back to the principles of English philosopher John Locke. The Ricardian socialists reasoned that labor is entitled to all it produces, and that rent, profit and interest were not natural outgrowths of the free market process but were instead distortions. They argued that private ownership of the means of production should be supplanted by cooperatives owned by associations of workers.

Ian Steedman was for many years a professor of economics at the University of Manchester before moving down the road to Manchester Metropolitan University. He retired from there at the end of 2006, but was appointed as an emeritus professor.

Piercy Ravenstone was a pseudonym used by a nineteenth-century political economist whose work led him to being variously described as a socialist, a tory and as an institutionalist. His contribution was noted by David Ricardo and Karl Marx and brought to wider attention via Piero Sraffa's editing of Ricardo's collected works. Sraffa suggested that Ravenstone's true identity was Richard Puller (1789–1831).

The Ricardo–Viner model, also known as the specific factors model, is an extension of the Ricardo model used in international trade theory. It was due to Jacob Viner's interest in explaining the migration of workers from the rural to urban areas after the Industrial revolution. Unlike the Ricardian model, the specific factors model allows for the existence of factors of production besides labor. In other words, labor is mobile, while the two other factors of production is immobile as opposed to the Ricardian model where labor is immobile internationally, but mobile between two sectors of an economy.

The Ricardo–Viner model, also known as the specific factors model, is an extension of the Ricardo model used in international trade theory. It was due to Jacob Viner's interest in explaining the migration of workers from the rural to urban areas after the Industrial revolution. Unlike the Ricardian model, the specific factors model allows for the existence of factors of production besides labor. In other words, labor is mobile, while the two other factors of production are immobile as opposed to the Ricardian model where labor is immobile internationally, but mobile between two sectors of an economy.