Thomas R. Carskadon House also known as the Carskadon Mansion and "Radical Hill," is a historic home located on Radical Hill overlooking Mineral Street (US 220), in Keyser, Mineral County, West Virginia. It is the former residence of Thomas R. Carskadon, an influential Mineral County farmer and political leader. It was built about 1886, and has two sections: a 2+1⁄2-story rectangular, brick main block and a two-story rear ell. It features a hip-on-mansard roof and two one-story, brick polygonal bays. It combines features of the Italianate and French Second Empire styles. Also on the property are the ruins of a brick dairy, the cement foundations of a silo, and the stone foundations of another outbuilding. [2]

It was listed on the National Register of Historic Places in 2002. [1]

Keyser is a city in and the county seat of Mineral County, West Virginia, United States. It is part of the Cumberland, MD-WV Metropolitan Statistical Area. The population was 5,439 at the 2010 census.

Shirley Plantation is an estate located on the north bank of the James River in Charles City County, Virginia, USA. It is located on scenic byway State Route 5, between Richmond and Williamsburg. It is the oldest active plantation in Virginia and the oldest family-owned business in North America, dating back to 1614 with operations starting in 1648. It used about 70 to 90 enslaved people at a time for forced labor including plowing the fields, cleaning, childcare, and cooking. It was added to the National Register in 1969 and declared a National Historic Landmark in 1970.

Burlington is a census-designated place (CDP) in Mineral County, West Virginia, United States, located along U.S. Route 50 where it crosses Pattersons Creek. As of the 2010 census, its population was 182. It is part of the Cumberland, MD-WV Metropolitan Statistical Area. The ZIP code for Burlington is 26710.

Thomas Rosabaum Carskadon from Keyser, West Virginia, U.S. had a national reputation as a Prohibition Party leader. He was the Prohibition candidate for Governor of West Virginia in 1884 and again in 1888. He was an influential Mineral County farmer and political leader. 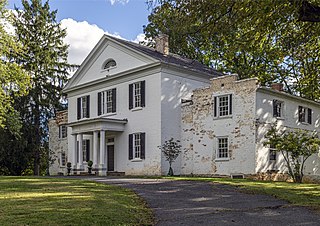 Happy Retreat is a historic property in Charles Town, West Virginia, which was originally owned and developed by Charles Washington, the youngest brother of George Washington and the founder of Charles Town.

The William Miles Tiernan House, also known as the Tiernan-Riley House, is a historic home located at Wheeling, Ohio County, West Virginia. It was built in 1900–01, and is a 2+1⁄2-story, L-shaped, Georgian Revival-style brick dwelling. It features two-story Ionic order pilasters that flank the one-story entrance portico. The house was built for William M. Tiernan, who was vice-president of the Bloch Brothers Tobacco Company.

William G. Morgan House, also known as "Morgan Acres," is a historic home located at Bunker Hill, Berkeley County, West Virginia. It was built in 1849, and is a two-story, nine bay, brick dwelling in the Greek Revival style. It is a long, narrow building with a central block and side wings, measuring 75 feet long and 21 feet deep. It features a one-story entrance portico with Doric order columns. The entrance has a Chinese Chippendale transom. Also on the property is a brick outbuilding with heavy board-and-batten door. It was built by William G. Morgan, great-grandson of Morgan Morgan, West Virginia's first white settler. The property was determined in 1924 to be the site of Morgan Morgan's first crude shelter built in 1726.

Baker Ropp House is a historic home located at Martinsburg, Berkeley County, West Virginia USA. It was built between 1890 and 1892, and is an "L"-shaped, two-story, brick Queen Anne-style dwelling. It is five bays wide, has a gable roof, and sits on a fieldstone foundation. It features a two-story, polygonal brick window bay and two-story frame porch. Also on the property are a brick smokehouse (1890-1892) and privy / shed (1890-1892).

Elven C. Smith House is a historic home located at Williamson, Mingo County, West Virginia. It was built in 1938, in a Neo-Classical Revival / Georgian Revival style. It is a red brick building with a hipped roof and features a two-story, flat roofed portico supported by fluted columns. Also on the property is a stone retaining wall and monumental stairway in the landscaped gardens.

Thomas Maslin House, also known as Mortimer Gamble House and Maslin-Gamble House, is a historic home located at Moorefield, Hardy County, West Virginia. It was built in 1848, and is a two-story brick dwelling with a vernacular Federal style. It features a single-bay, pedimented portico supported by paired Ionic order columns. Above the four panel entrance is a semi-elliptical fanlight. Also on the property is a contributing two story, brick servant's quarters.

Carskadon House also known as the "Locust Grove" and "Radical Hill," is a historic home located near Burlington, Mineral County, West Virginia. It was built in 1821, and is a two-story rectangular, side-gabled brick dwelling in a vernacular Federal style. It sits on a granite foundation and has a two-story rear ell. It features a one-story, Greek Revival style entrance portico. Also on the property are a contributing granary, scale house and barn. 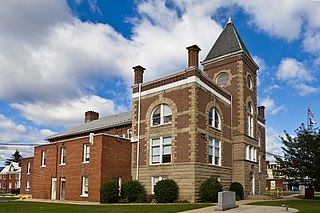 Mineral County Courthouse is a historic courthouse located at Keyser, Mineral County, West Virginia. It was built in 1868 and expanded or remodeled in 1894 and 1938–1941. The original section of the courthouse is a 2 1/2 story, brick building. The 1894 modifications are in the Romanesque Revival style. It is a three-story section constructed of brick and rusticated stone, with a low-pitched hipped roof. It features a centered tower topped with a pyramidal roof. The side and rear, two-story additions were constructed in 1938 and 1941 to provide additional county office space. U.S. Senator and vice presidential candidate Henry G. Davis donated land for the courthouse square.

Fort Hill, also known as Fort Hill Farm, is a historic plantation house and national historic district located near Burlington, Mineral County, West Virginia. The district includes 15 contributing buildings, 1 contributing site, and 2 contributing structures. The main house was completed in 1853, and is a two-story, "L"-shaped brick dwelling composed of a side gable roofed, five bay building with a rear extension in the Federal style. It features a three-bay, one-story front porch supported by four one foot square Tuscan order columns. Also on the property are a number of contributing buildings including a washhouse and cellar, outhouse, a dairy and ice house, a meat house, a garage, a hog house, poultry houses, a bank barn with silo, and a well. The family cemetery is across the road west of the main house. Located nearby and in the district is "Woodside," a schoolhouse built about 1890, and a tenant house and summer kitchen.

Elm Hill, also known as the Campbell-Bloch House, is a historic house and national historic district located near Wheeling, Ohio County, West Virginia. The district includes two contributing buildings and one contributing site. The main house was built about 1850, and is a 2+1⁄2-story, brick house with a low 2-story wing in the Greek Revival style. It has an L-shaped plan, a 3-bay entrance portico, and hipped roof with an octagonal bell-cast central cupola. The interior has a central formal hall plan. Also on the property are a contributing brick, spring house / smoke house and a small cemetery dating to about 1835.

Benton, also known as Spring Hill, is a house in Loudoun County, Virginia, near Middleburg. The house was built by William Benton, a brickmaker and builder, around 1831. Benton had made a journey to Wales to collect an inheritance shortly after 1822 and there saw a house that he admired and wished to replicate on his own lands. He called the house "Spring Hill." 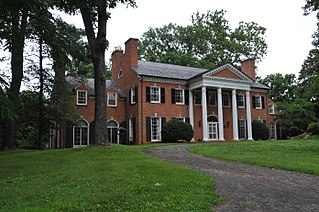 The Oaks, also known as Innes Hill, is a historic home and farm located near Warrenton, Fauquier County, Virginia. The house was built between 1931 and 1933, and consists of a 1 to 2+1⁄2-story, five bay, Classical Revival style main block with a four-part plan. The attached sections are a one-story pantry and kitchen wing and garage attached by a four bay arcade. The main block features a prominent two-story, four-bay, pedimented portico has four extraordinary fluted Tower of the Winds columns. Also on the property are the contributing Italianate style brick stable ; a brick smokehouse; and an agent's cottage, tile barn, corn house, spring house and summerhouse built between 1928 and 1930; garage with servants' quarters, greenhouse, log cabin, potato house, pump house, chicken house and field shed built between 1931 and 1945; the mansion landscape and scene of the 1881 duel; and a windmill. It was the site in September 1881, of the one of the last four duels in Virginia, prior to enactment of anti-duel legislation in 1882.

Oakley Hill is a historic plantation house located near Mechanicsville, Hanover County, Virginia. It was built about 1839 and expanded in the 1850s. It is a two-story, frame I-house dwelling in the Greek Revival style. On the rear of the house is a 1910 one-story ell. The house sits on a brick foundation, has a standing seam metal low gable roof, and interior end chimneys. The front facade features a one-story front porch with four Tuscan order columns and a Tuscan entablature. Also on the property are a contributing smokehouse and servants' house.

The historic home listed as Lewis Farm, also known as The Farm and John A. G. Davis Farm, is located at Charlottesville, Virginia. It was built in 1826, and is a two-story brick dwelling with a low hipped roof and two large chimneys. On the front facade is a Tuscan order portico with a terrace above. The house was built by individuals who worked with Thomas Jefferson on building the University of Virginia. Its builder, John A. G. Davis, was law professor at the University of Virginia and was shot and killed outside Pavilion X by a student in 1840. During the American Civil War, Brigadier General George Armstrong Custer set up temporary headquarters at the house where he remained for three days.

Thomas J. Michie House is a historic home located at Staunton, Virginia. It was built in 1847–1848, and is a three-story, three bay, Greek Revival style brick dwelling with a two-story wing. The total size is 7,100 square feet. The front facade features a one-story, flat-roofed entrance porch supported by four slender Tuscan order columns. The interior has two elaborate country Federal mantels taken from a nearby 1820 country home. It was built by Thomas J. Michie, who represented Augusta County in the Virginia House of Delegates and may be of the same family that built Michie's Tavern in Charlottesville, Virginia as well as Michie Stadium at West Point Military Academy. It was later the home of jurist Allen Caperton Braxton (1862-1914) and Henry W. Holt (1864-1947) who was the Chief Justice of the Virginia Supreme Court.