The George W. Hill Correctional Facility, located in the townships of Thornbury and Concord, [1] has a Thornton postal address. [2]

In colonial times, Thornton was known as "Yellow House" after the Inn and tavern opened in 1750. [3]

The community includes the Thornton Village Historic District, which includes buildings dating from 1750 to 1855. [4] The District was added to the National Register of Historic Places in 2006. [5] 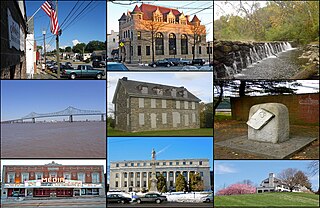 Delaware County, colloquially referred to as Delco, is a county located in the U.S. state of Pennsylvania that borders Philadelphia. With a population of 562,960, it is the fifth most populous county in Pennsylvania, and the third smallest in area. The county was created on September 26, 1789, from part of Chester County, and named for the Delaware River. 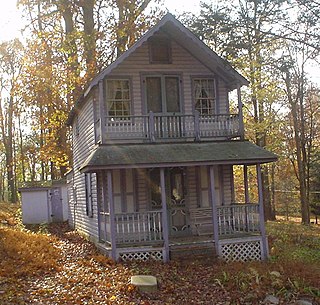 Chester Heights is a borough in Delaware County, Pennsylvania, United States. The population was 2,531 at the 2010 census. Most of the borough lies south of U.S. 1, about a mile southwest of Wawa.

Concord Township is a township in Delaware County, Pennsylvania, United States. The population was 17,231 at the 2010 census. It contains the unincorporated communities of Concordville and Glen Mills. 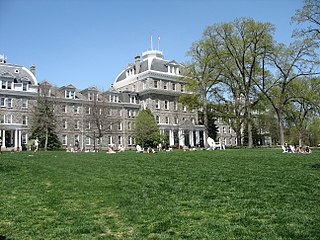 Swarthmore is a borough in Delaware County, Pennsylvania, United States. Swarthmore was originally named "Westdale" in honor of noted painter Benjamin West, who was one of the early residents of the town. The name was changed to "Swarthmore" after the establishment of Swarthmore College. The borough population was 6,194 as of the 2010 census.

The Grange Estate, also known as Maen-Coch and Clifton Hall, is a historic mansion built by Henry Lewis Jr. (1671-1730) in Havertown, Pennsylvania, near Philadelphia, in Delaware County, Pennsylvania. Parts of a c. 1700 residence may be incorporated in the carriage house. The main house, built in c. 1750 and expanded several times through the 1850s, was purchased by Haverford Township in 1974. The building was added to the National Register of Historic Places in 1976 as The Grange.

Ridley Creek State Park is a 2,606-acre (1,055 ha) Pennsylvania state park in Edgmont, Middletown and Upper Providence Townships, Delaware County, Pennsylvania in the United States. The park, about 5 miles (8 km) north of the county seat of Media, offers many recreational activities, such as hiking, biking, fishing, and picnicking. Ridley Creek passes through the park. Highlights include a 5-mile (8 km) paved multi-use trail, a formal garden designed by the Olmsted Brothers, and Colonial Pennsylvania Plantation, which recreates daily life on a pre-Revolutionary farm. The park is adjacent to the John J. Tyler Arboretum. Ridley Creek State Park is just over 16 miles (26 km) from downtown, Philadelphia between Pennsylvania Route 352 and Pennsylvania Route 252 on Gradyville Road. 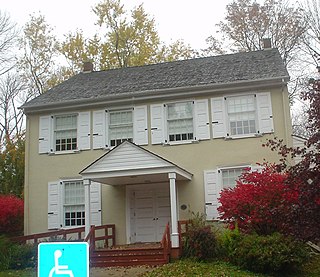 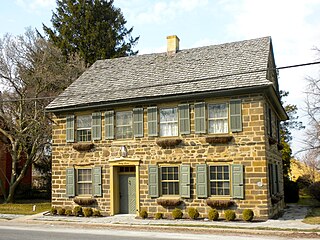 Strasburg Road was an early road in Pennsylvania connecting Philadelphia to Strasburg in Lancaster County. The route was surveyed by John Sellers and others in 1772-3 under the colonial administration of Governor Richard Penn and completed under the new administration of the independent state of Pennsylvania. The route started at the "second ferry" on the Schuylkill River, today's Market Street in Philadelphia, and went through West Chester, East Fallowfield Township, and Gap, before ending in Strasburg. Earlier roads travelled much the same route, including a Native American path in use as early as 1620.

Zion Lutheran Church, also known as The Lutheran Church of Middle Smithfield, is a historic Lutheran church located in Delaware Water Gap National Recreation Area at Middle Smithfield Township, Monroe County, Pennsylvania. It was built in 1851, and is a one-story, brick building in a modified Greek Revival style. It is built of brick made by members of the congregation and has a slate covered front gable roof. 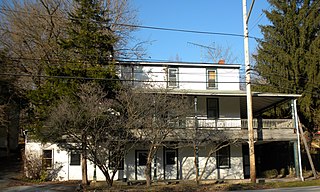 Mortonville is an unincorporated area and historic hamlet in Chester County, Pennsylvania on the eastern bank of the West Branch Brandywine Creek. It consists of about a half-dozen structures, two of which are on the National Register of Historic Places: the Mortonville Hotel, and the 12.5-foot-long (3.8 m) "Bridge in East Fallowfield Township" which crosses a mill race a few feet east of a larger bridge. The larger bridge, known as the Mortonville Bridge, was also listed on the NRHP until 2010 when it was delisted following a renovation. The two bridges are in East Fallowfield Township, while most other structures are in Newlin Township.

Thornton Village Historic District is a national historic district in Thornbury Township, Delaware County, Pennsylvania. Located in the crossroads village of Thornton at the intersection of Glen Mills and Thornton Roads, the district includes 13 contributing buildings built between 1750 and 1855, some in the Federal style. Among its structures, most of which face Glen Mills Road, are the Yellow House, one commercial building, seven residences, a converted blacksmith shop, a converted barn, three stables or carriage houses, and two frame sheds. Some of the houses are.

George W. Hill Correctional Facility is a county-owned, privately managed jail and prison located in Delaware County, Pennsylvania, in the townships of Thornbury and Concord. It has a Thornton postal address, and is within the Philadelphia metropolitan area. 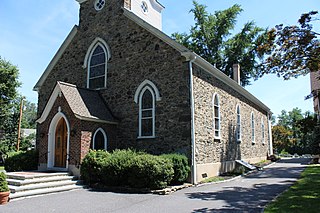