Thottupoyil is a small village in Malappuram district, Kerala, India.

Thottupoyil is 5 km (3.1 mi) north of Manjeri. The eastern part of Thottupoyil is under the Manjeri municipality, and the western part is under the Thrikkalangode grama Panchayath. There are continuous bus services to Thottupoyil from Manjeri city. There is a stream flowing towards the middle of the village from west to east.

Manjeri is a Town and Municipality in Malappuram District in the state of Kerala, India, with a population of 97104 inhabitants at the 2011 Census.

The west of Thottupoyil is Koomankulam village, and the east is Cholakkal village. The southern boundary is a hill named "Kombilayi Mala", and the northern boundary has two villages, Cherankuth and Manhappatta. There is a Government LP School in the middle of the village. There are two main mosques in Thottupoyil. [1]

Amayé-sur-Seulles is a commune in the Calvados department in the Normandy region of northwestern France.

New York State Route 104 (NY 104) is a 182.41-mile (293.56 km) long east–west state highway in Upstate New York in the United States. It spans six counties and enters the vicinity of four cities—Niagara Falls, Lockport, Rochester, and Oswego—as it follows a routing largely parallel to the southern shoreline of Lake Ontario, along a ridge of the old shoreline of Glacial Lake Iroquois. The western terminus of NY 104 is an intersection with NY 384 in Niagara Falls, Niagara County, while its eastern terminus is a junction with NY 13 in the town of Williamstown, Oswego County. The portion of NY 104 between Rochester and the village of Webster east of the city is a limited-access highway known as the Keeler Street Expressway west of NY 590 and the Irondequoit–Wayne County Expressway east of NY 590; from Williamson to Oswego, NY 104 is a super two highway.

The Green Line, or (pre-) 1967 border or 1949 Armistice border, is the demarcation line set out in the 1949 Armistice Agreements between the armies of Israel and those of its neighbors after the 1948 Arab–Israeli War. It served as the de facto borders of the State of Israel from 1949 until the Six-Day War in 1967.

Line 2 is an east-west line of the Shanghai Metro network. With a length of nearly 64 km, it is the second longest line in the metro system after Line 11. Line 2 runs from East Xujing in the west to Pudong International Airport in the east, passing Hongqiao Airport, the Huangpu river, and the Lujiazui Financial District in Pudong. With a daily ridership of almost 1.5 million, it is the Shanghai Metro's busiest metro line. The eastern portion of the line, from Guanglan Road to Pudong International Airport, was once operated almost independently from the main segment until April 18, 2019 while through service between these two started the next day. The line is colored light green on system maps.

Arandas is a commune in the Ain department in the Auvergne-Rhône-Alpes region of eastern France.

Belton and Manthorpe is a civil parish in the South Kesteven district of Lincolnshire, England, consisting of Belton and Manthorpe, just north of Grantham. According to the 2001 census it had a population of 517 in 192 households. By 2011 the authorities recorded 528 people in 216 homes.

New York State Route 52 (NY 52) is a 108.72-mile (174.97 km) state highway in the southeastern part of the state. It generally runs from west to east, beginning at the Pennsylvania state line in the Delaware River near Narrowsburg, crossing the Hudson River on the Newburgh–Beacon Bridge, and ending in Carmel. NY 52 and NY 55, both major east–west routes of the Mid-Hudson Region, run parallel to each other, intersecting in downtown Liberty.

New York State Route 101 (NY 101) is a 3.58-mile (5.76 km) long state highway in northwestern Nassau County, New York, in the United States. It runs north–south as Port Washington Boulevard from NY 25A in Flower Hill, west of Roslyn and north of Manhasset, to Astor Lane in Sands Point. It continues south along Searingtown Road to Shelter Rock Road and north on Middle Neck Road to a dead end at Long Island Sound as the unsigned County Route 101.

Anais is a commune in the Charente-Maritime department in the Nouvelle-Aquitaine region of southwestern France.

King's Highway 23, commonly referred to as Highway 23, is a provincially maintained highway in the Canadian province of Ontario. The route travels from Highway 7 east of Elginfield north to Highway 9 and Highway 89 in Harriston. The total length of Highway 23 is 97.7 kilometres. The highway was first established in 1927 between Highway 8 in Mitchell and Highway 9 in Teviotdale, via Monkton, Listowel and Palmerston. As part of a depression relief program, it was extended south to Highway 7 in 1934. It remained relatively unchanged until 2003, when it was rerouted northward from Palmerston to Harriston. 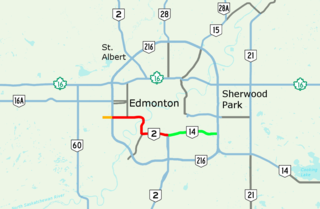 Autry is a commune in the Ardennes department in the Grand Est region of north-eastern France.

Anguilcourt-le-Sart is a commune in the department of Aisne in the Hauts-de-France region of northern France.

Kendall Drive, also known as Southwest 88th Street and historically North Kendall Drive, runs for 13.3 miles (21.4 km) in an east–west orientation across mid-southern Miami-Dade County, Florida. The majority of Kendall Drive, between State Road 997 at The Hammocks and US 1 on the Kendall–Pinecrest border, is signed as the 10.7-mile-long (17.2 km) State Road 94. The road serves as a major arterial road through the suburbs of the southern Miami metropolitan area, connecting its predominantly residential neighborhoods to shopping districts and to three freeways, allowing commuter travel.

King's Highway 121, commonly referred to as Highway 121, was a provincially maintained highway in the Canadian province of Ontario that connected several communities in the cottage country region of Central Ontario on the southern edge of the Canadian Shield. Between Fenelon Falls and Minden, Highway 121 served as an alternative route to Highway 35, which was severely congested during summer weekends. From Minden, the highway branched east to Haliburton Village and thereafter followed the present route of Highway 118 to Highway 28 in Paudash.

Kirinnya is a location in Kira Municipality in Wakiso District in the Central Region of Uganda.