The three-striped night monkey (Aotus trivirgatus), also known as northern night monkey or northern owl monkey, is one of several species of owl monkeys currently recognised. It is found in Venezuela and north-central Brazil.

Until 1983, all the owl monkeys were regarded as subspecies of Aotus trivirgatus, and all were referred to as douroucoulis. The use of the name douroucouli exclusively for the three-striped night monkey is not universally accepted; some authors use it for the entire genus, or for the grey-necked group of species within it (to which A. trivirgatus belongs).

Like other owl monkeys, the three-striped night monkey lives in woodlands including rain forest. It is mainly black, with striking white markings on its face. Its body size is 27–48 cm, and its tail is about the same length again. Adults weigh up to 1 kg. It has very large eyes, and is most active on moonlit nights, feeding on fruit, nuts, leaves, insects and other small invertebrates, and birds' eggs.

The three-striped night monkey forms pair bonds which are broken only by the death of one partner. It lives in family groups, with the immature young staying with their parents until sexual maturity at the age of 3 or 4. Normally only one infant is born, after a gestation period of a little over 4 months.

Night monkeys, also known as owl monkeys or douroucoulis, are nocturnal New World monkeys of the genus Aotus, the only member of the family Aotidae. The genus comprises eleven species which are found across Panama and much of South America in primary and secondary forests, tropical rainforests and cloud forests up to 2,400 metres (7,900 ft). Night monkeys have large eyes which improve their vision at night, while their ears are mostly hidden, giving them their name Aotus, meaning "earless".

Manuel Elkin Patarroyo Murillo is a Colombian Professor of Pathology and Immunology who made the world's first attempt to create a synthetic vaccine against the protozoal parasite Plasmodium falciparum, the cause of severe malaria, and responsible for the death of ~1.5 million people per year in tropical and subtropical regions, including parts of the Americas, Asia, and Africa.

The bearded sakis, or cuxiús are five or six species of New World monkeys, classified in the genus Chiropotes. They live in the eastern and central Amazon in South America, ranging through southern Venezuela, Guyana, Suriname, French Guiana and northern and central Brazil. The species are entirely allopatric, their distributions being separated by major rivers.

The Rio Abiseo National Park is located in the San Martín department of Peru. UNESCO pronounced it as Natural and Cultural Heritage of Humanity in 1990. The park is home to many species of flora and fauna, as well as the location of over 30 pre-Columbian archaeological sites. Since 1986, the park has not been open to tourism due to the fragile nature of both the natural and archaeological environment.

The black-striped capuchin, also known as the bearded capuchin, is a New World monkey in the family Cebidae. They can be found in northern and central Brazil. These capuchins mostly live in dry forests, and savannah landscapes between the Rio Araguaia and the Rio Grande. Known for its tool use, the black-stiped capuchin has been shown to use tools in a wide variety of situations, ranging from using rocks for nut cracking to using sticks for digging. They were, until recently, considered a subfamily of the tufted capuchin, but because of more research and insights, they are considered their own species by many. 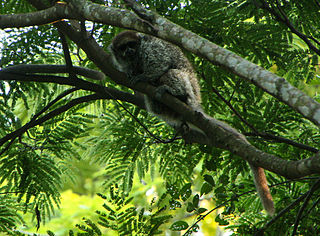 The white-eared titi monkey also known as the Bolivian titi or Bolivian gray titi, is a species of titi monkey, a type of New World monkey, from eastern Bolivia and an area of western Brazil. The species has a range that extends east from the Manique River in Beni Department, Bolivia to southern Rondônia in Brazil. The southern end of its range includes forests around the city of Santa Cruz de la Sierra. 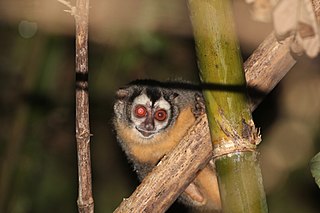 The Peruvian night monkey, also known as the Andean night monkey, is a nocturnal New World monkey endemic to northern Peru. Adults weigh around 1 kg (2.2 lb) and measure up to 50 cm (20 in) in length. Its colour is grey to light brown with characteristic black and white markings on the face. The chest, belly and upper arms are orange tinged, however, to a lesser extent then Aotus nigriceps.

The Jamaican monkey is an extinct species of New World monkey that was endemic to Jamaica. It was first uncovered at Long Mile Cave by Harold Anthony in 1920. 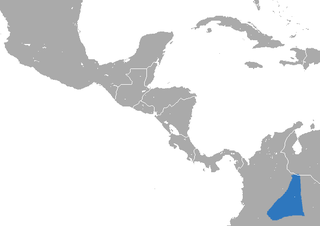 The Panamanian night monkey or Chocoan night monkey is a species of night monkey formerly considered a subspecies of the gray-bellied night monkey of the family Aotidae. Its range consists of Panama and the Chocó region of Colombia. There are also unconfirmed reports of its occurrence in Costa Rica, especially on the Caribbean coast of Costa Rica. The species definitely occurs in the Atlantic lowlands of Panama close to the Costa Rica border.

Aotus dindensis is an extinct species of New World monkeys in the genus Aotus from the Middle Miocene. Its remains have been found at the Konzentrat-Lagerstätte of La Venta in the Honda Group of Colombia.

Humboldt's white-fronted capuchin is a species of gracile capuchin monkey. It is found in Colombia, Venezuela, Brazil, and potentially the island of Trinidad.

Wikispecies has information related to Three-striped Night Monkey .
This page is based on this Wikipedia article
Text is available under the CC BY-SA 4.0 license; additional terms may apply.
Images, videos and audio are available under their respective licenses.