Last updated January 10, 2021
Family of birds
This article is about birds in family Turdidae. For other birds known as thrushes, see Thrush (disambiguation) § Birds. For the mouth disease, see candidiasis.

The thrushes are a passerine bird family, Turdidae, with a worldwide distribution. The family was once much larger before biologists determined the subfamily Saxicolinae, which includes the chats and European robins, were Old World flycatchers. Thrushes are small to medium-sized ground living birds that feed on insects, other invertebrates and fruit. Some unrelated species around the world have been named after thrushes due to their similarity to birds in this family.

Thrushes are plump, soft-plumaged, small to medium-sized birds, inhabiting wooded areas, and often feeding on the ground. The smallest thrush may be the forest rock thrush, at 21 g (0.74 oz) and 14.5 cm (5.7 in). However, the shortwings, which have ambiguous alliances with both thrushes and Old World flycatchers, can be even smaller. The lesser shortwing averages 12 cm (4.7 in). The largest thrush is the Great thrush at 128 to 175 g (4.5 to 6.2 oz) and 28 to 33 cm (11 to 13 in), though the commonly recognized Blue whistling-thrush is an Old world flycatcher. [1] The Amami thrush might, however, grow larger than the Great thrush. Most species are grey or brown in colour, often with speckled underparts.

They are insectivorous, but most species also eat worms, land snails, and fruit. Many species are permanently resident in warm climates, while others migrate to higher latitudes during summer, often over considerable distances. [2]

Thrushes build cup-shaped nests, sometimes lining them with mud. They lay two to five speckled eggs, sometimes laying two or more clutches per year. Both parents help in raising the young. [2] In almost all cases, the nest is placed on a branch; the only exceptions are the three species of bluebird, which nest in holes.

Turdidae species spread the seeds of plants, contributing to the dispersal of many species and the recovery of ecosystems.

Many bats and birds rely heavily on fruits for their diet, including birds in the families Cotingidae, Columbidae, Trogonidae, Turdidae, and Ramphastidae. While eating fruit, these animals swallow seeds and then later regurgitate them or pass them in their faeces. Such ornithochory has been a major mechanism of seed dispersal across ocean barriers.

Other seeds may stick to the feet or feathers of birds, and in this way may travel long distances. Seeds of grasses, spores of algae, and the eggs of molluscs and other invertebrates commonly establish in remote areas after long journeys of this sort. The Turdidae have a great ecological importance because some populations migrate long distances and disperse the seeds of endangered plant species at new sites, helping to eliminate inbreeding and increasing the genetic diversity of local flora.

The family Turdidae was introduced (as Turdinia) by the French polymath Constantine Samuel Rafinesque in 1815. [3] [4] The taxonomic treatment of this large family has varied significantly in recent years. Traditionally, the Turdidae included the small Old World species, like the nightingale and European robin in the subfamily Saxicolinae, but most authorities now place this group in the Old World flycatcher family Muscicapidae.

The family formerly included more species. At the time of the publication of the third edition of Howard and Moore Complete Checklist of the Birds of the World in 2003, the genera Myophonus , Alethe , Brachypteryx and Monticola were included in Turdidae. [5] Subsequent molecular phylogenetic studies have shown that the species in these four genera are more closely related to species in the family Muscicapidae. [6] [7] As a consequence, these four genera are now placed in Muscicapidae. [8] [9] In contrast, the genus Cochoa which had previously been placed in Muscicapidae was shown to belong in Turdidae. [6] [7]

The following genera have now been placed within Turdus:

See list of thrush species for more detail. For other species previously in the Turdidae, see Muscicapidae and chats. 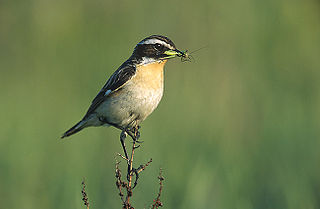 Chats are a group of small Old World insectivorous birds formerly classified as members of the thrush family (Turdidae), but following genetic DNA analysis, are now considered to belong to the Old World flycatcher family (Muscicapidae).

The wheatears are passerine birds of the genus Oenanthe. They were formerly considered to be members of the thrush family, Turdidae, but are now more commonly placed in the flycatcher family, Muscicapidae. This is an Old World group, but the northern wheatear has established a foothold in eastern Canada and Greenland and in western Canada and Alaska. 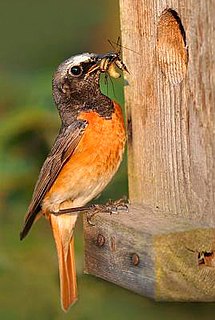 Redstarts are a group of small Old World birds. They were formerly classified in the thrush family (Turdidae), but are now known to be part of the Old World flycatcher family Muscicapidae. They are currently treated in four genera, the true redstarts Phoenicurus, the closely related genera Chaimarrornis and Rhyacornis, and one species in the less closely related genus Luscinia.

Catharus is a genus of birds in the thrush family Turdidae. It contains the small, mostly insectivorous or omnivorous migrant thrushes of North America and the nightingale-thrushes of Central and South America. Its closest relative is the wood thrush of the monotypic genus Hylocichla, which is sometimes merged into Catharus. 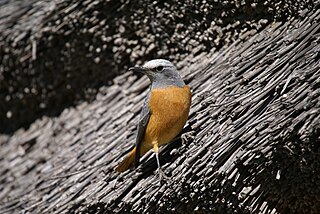 The rock thrushes, Monticola, are a genus of chats, medium-sized mostly insectivorous or omnivorous songbirds. All are Old World birds, and most are associated with mountainous regions.

The shortwings are colourful medium-sized mostly insectivorous birds in the genus Brachypteryx of the thrush family Turdidae, although some taxonomists place them in the Old World Flycatcher family Muscicapidae. They show strong sexual plumage dimorphism. All are southeast Asian species.

Alethe is a genus of small mainly insectivorous birds in the Old World flycatcher family Muscicapidae that occur in West Africa. 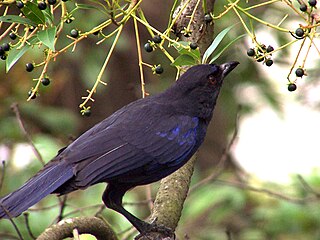 The scrub robins or bush chats are medium-sized insectivorous birds in the genus Cercotrichas. They were formerly in the thrush family, (Turdidae), but are more often now treated as part of the Old World flycatcher family, (Muscicapidae). They are not closely related to the Australian scrub-robins, genus Drymodes in the family Petroicidae.

The cochoas are medium-sized frugivorous, insectivorous and molluscivorous birds in the genus Cochoa. Their bright contrasting plumage patterns, sexual dimorphism and feeding habits made their systematic position difficult to ascertain in early times, Richard Bowdler Sharpe placed them with the Prionopidae in 1879 while many considered them as some kind of aberrant thrush. The genus was previously included in the Old World flycatcher family Muscicapidae but molecular phylogenetic studies have shown that it is more closely related to the thrush family Turdidae.

The blue rock thrush is a species of chat. This thrush-like Old World flycatcher was formerly placed in the family Turdidae. It breeds in southern Europe, northwest Africa, and from Central Asia to northern China and Malaysia. The blue rock thrush is the official national bird of Malta and was shown on the Lm 1 coins that were part of the country's former currency. 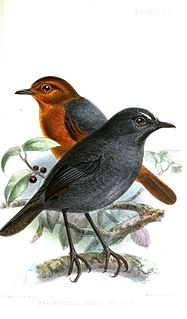 Brachypteryx is a genus of passerine birds containing six species known as shortwings, that occurs in southeast Asia.

The Nilgiri blue robin, also known as Nilgiri shortwing, white-bellied shortwing, Nilgiri sholakili or rufous-bellied shortwing is a species of passerine bird in the family Muscicapidae endemic to the Shola forests of the higher hills of southern India, mainly north of the Palghat Gap. This small bird is found on the forest floor and undergrowth of dense forest patches sheltered in the valleys of montane grassland, a restricted and threatened habitat.

Gould's shortwing is a small species of passerine bird in the family Muscicapidae. It is found in the Himalayas, Yunnan and northern parts of Myanmar and Vietnam. It breeds in the eastern Himalayas in rocky areas above the tree-line and winters at lower altitude in wooded valleys. 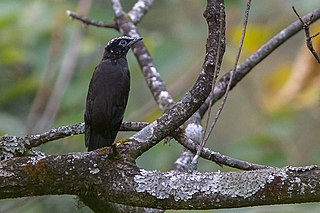 The purple cochoa is a brightly coloured bird found in the temperate forests of Asia. It is a quiet and elusive bird species that has been considered to be related to the thrushes of family Turdidae or the related Muscicapidae. They are found in dark forested areas and is found in the canopy, where it often sits motionless.

The green cochoa is a bird species that was variously placed with the thrushes of family Turdidae or the related Muscicapidae. It is considered closer to the former. 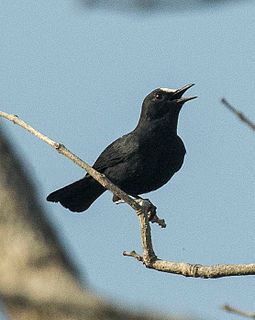 The white-bellied blue robin or white-bellied sholakili , is a bird of the family Muscicapidae. It is endemic to the Shola forests of the higher hills of southern India. The Nilgiri blue robin and this species were once considered separate species, later lumped as sub-species of a single species (major) and elevated again to full species in 2005 by Pamela C. Rasmussen. The species was earlier thought to be related to the shortwings and placed in the genus Brachypteryx and later moved to Myiomela since species in the genus Brachypteryx shows marked sexual dimorphism. In 2017, a study found that this is a sister group of the flycatchers in the genera Niltava, Cyornis and Eumyias among others. It was then placed in newly erected genus Sholicola. This small bird is found on the forest floor and undergrowth of dense forest patches sheltered in the valleys of montane grassland, a restricted and threatened habitat.

Chamaetylas is a genus of small, mainly insectivorous birds in the Old World flycatcher family Muscicapidae that are native to sub-Saharan Africa.