Thunbergia laurifolia, the laurel clockvine [1] or blue trumpet vine, is native to India and Thailand [2] and the Indomalayan realm, the species occurs from Indochina to Malaysia. [3]

Thunbergia laurifolialeaves are opposite, heart-shaped with serrated leaf margin and taper to a pointed tip. This species is very similar in appearance to T. grandiflora , but has longer, thinner leaves and its young stems and leaves are hairless.

The flowers are not scented and borne on pendulous inflorescences. The hermaphrodite flower is trumpet-shaped with a short broad tube, white outside and yellowish inside. The corolla is pale blue in colour with 5–7 petals, one larger than the others. Plants flower almost continuously throughout the year with flowers opening early in the morning and aborting in the evening of the same day. Carpenter bees are frequent visitors, creeping into the flowers for pollen and nectar while black ants are present probably as nectar scavengers. The plant develops a very tuberous root system. [4]

Thunbergia laurifolia is a popular ornamental plant in tropical gardens. It is a long-blooming vine in cultivation. Propagation is from stem cuttings or shoots from the tuberous roots. It is a fast-growing perennial herbaceous climber. It has become an exotic weed in many tropical countries.

In Malaysia, juice from crushed leaves of T. laurifolia are taken for menorrhagia, placed into the ear for deafness, and applied for poulticing cuts and boils. [5] In Thailand, leaves are used as an antipyretic, as well as for detoxifying poisons. [6] It is locally known as akar tuau in Malaysia and rang jeud (รางจืด) in Thailand. Several Thai herbal companies have started producing and exporting rang jeud tea. [7]

Thunbergia laurifolia can become an invasive species where escaping from ornamental garden uses into native habitats in supportive climates. Because it is a fast-growing perennial plant it has become an escaped exotic and noxious weed in many tropical countries The plant has become a weed found in the Cerrado vegetation of Brazil and in tropical areas of Australia. 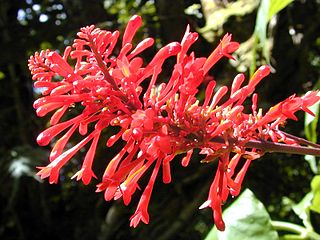 Passiflora foetida is a species of passion flower that is native to the southwestern United States, Mexico, the Caribbean, Central America, and much of South America. It has been introduced to tropical regions around the world, such as Southeast Asia, South Asia, Hawaii, Africa, and The Maldives. It is a creeping vine like other members of the genus, and yields an edible fruit. The specific epithet, foetida, means "stinking" in Latin and refers to the strong aroma emitted by damaged foliage.

Plantago lanceolata is a species of flowering plant in the plantain family Plantaginaceae. It is known by the common names ribwort plantain, narrowleaf plantain, English plantain, ribleaf, lamb's tongue, and buckhorn. It is a common weed on cultivated or disturbed land.

Passiflora incarnata, commonly known as maypop, purple passionflower, true passionflower, wild apricot, and wild passion vine, is a fast-growing perennial vine with climbing or trailing stems. A member of the passionflower genus Passiflora, the maypop has large, intricate flowers with prominent styles and stamens. One of the hardiest species of passionflower, it is both found as a wildflower in the southern United States and in cultivation for its fruit and striking bluish purple blooms. Passiflora incarnata fruit contain many seeds, each surrounded by an aril holding edible juice, and this juice can be consumed fresh or used to flavor processed products.

Viburnum tinus, the laurustinus, laurustine or laurestine, is a species of flowering plant in the family Adoxaceae, native to the Mediterranean area of Europe and North Africa. Laurus signifies the leaves' similarities to bay laurel. 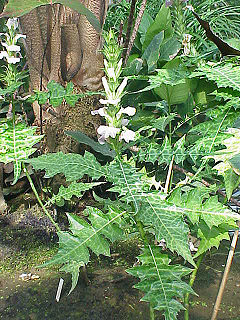 Lamium album, commonly called white nettle or white dead-nettle, is a flowering plant in the family Lamiaceae. It is native throughout Europe and Asia, growing in a variety of habitats from open grassland to woodland, generally on moist, fertile soils. 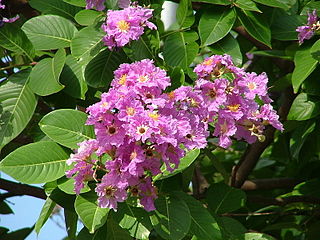 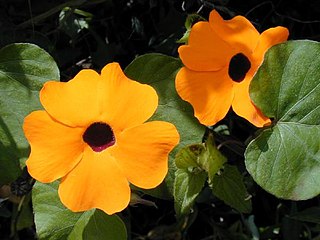 Thunbergia alata, commonly called black-eyed Susan vine, is a herbaceous perennial climbing plant species in the family Acanthaceae. It is native to Eastern Africa, and has been naturalized in other parts of the world. It is found in Cerrado vegetation of Brazil and Hawaii, along with eastern Australia and the southern USA in the states of Texas and Florida, Colombia, and in Puerto Rico.

Tecoma stans is a species of flowering perennial shrub in the trumpet vine family, Bignoniaceae, that is native to the Americas. Common names include yellow trumpetbush, yellow bells, yellow elder, ginger-thomas. Tecoma stans is the official flower of the United States Virgin Islands and the floral emblem of The Bahamas. 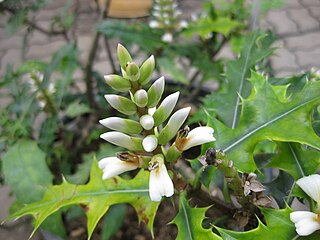 Acanthus ebracteatus is a species of shrubby herb that grows in the undergrowth of mangroves of south-east Asia. Common names include sea holly and holly mangrove.

Blumea balsamifera is a flowering plant belonging to the genus Blumea of the family Asteraceae. It is also known as Ngai camphor and sambong.

Momordica foetida is a perennial climbing vine native of tropical Africa, closely related to the bitter melon and balsam apple. Its species name ("bad-smelling") refers to its unpleasant smell. It was previously named M. morkorra and M. cordata (Cogn.)

Smilax laurifolia is a species of flowering plant in the greenbrier family known by the common names laurel greenbrier, laurelleaf greenbrier, bamboo vine, and blaspheme vine. It is native to the southeastern United States, where it occurs along the Gulf and Atlantic coastal plains from Texas to New Jersey, the range extending inland to Arkansas, Oklahoma, and Tennessee. It also occurs in Cuba and the Bahamas. 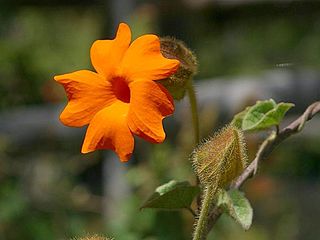