Thysanoessa is a genus of the krill [1] that play critical roles in the marine food web. They're abundant in Arctic and Antarctic areas, feeding on zooplankton and detritus to obtain energy. [2] Thysanoessa are responsible for the transportation of carbon and nutrients from surface waters to deeper trophic levels. This genus serves as prey for various fish and provide energy to marine ecosystems as they are at a low trophic level. Most travel through vertical migration, meaning they travel up and down in the water column, providing food for predators at the surface during the night, and at deeper levels during the day.

Longevity in this genus varies depending on the specie. The average lifespan for the Thysanoessa is between three to four years. The development and growth of this organism takes place during winter to autumn. [3] Thysanoessa are broadcast spawners, meaning that the males will physically put their sperm onto the female’s body so that the eggs become fertilized as the female releases them. [4] Once released and in the water, the eggs are dispersed and on their own, ready to hatch in the nauplius stage. Female krill lay over 10,000 eggs, sometimes seasonally, resulting in large populations. The Thysanoessa larvae are slender and their carapace is short in early stages. [5] As the body expands, the cephalothorax becomes transparent.

Thysanoessa are decapod crustaceans, meaning that they have five pairs of legs on their three-parted body. The cephalothorax is divided into the head, the thorax, and the pleon. With the help of the legs and two antennae, the krill is able to feed and groom freely. The male species have a "rounded lobe" on the first and second antennae called a setae. The Thysanoessa genus is a bioluminescent organism. They have organs called photophores that undergo an enzymatic chemical reaction. These bioluminescent enzymes derive from the consumption of dinoflagellates, yet the complete role of photophores are still unknown.

At low food concentrations, Thysanoessa has higher feeding rates compared to other krill. Studies have shown that high feeding rates are due to morphology of appendage and stomach content. [7] Thysanoessa have a high content of fatty acid that comes from the consumption of copepods which contain wax-ester. This genus also feeds on decaying plant material from suspended water columns and bottom sediments. The spacing in the appendage of a Thysanoessa allows for different sources of food between species, Many species of Thysanoessa, for instance, T. inermis and T. raschii differentiate in food sources during the winter and spring. [7]

Thysanoessa are found in the Western and Central Barents Sea. Their location varies within species, while some are boreal, others live in a sub-arctic habita t. Shifts in locations are caused by impacts of global warming and severe changes in ocean temperatures. [8] Given this, Arctic habitats are projected to shift vigorously in the next years, impacting krill growth and abundance of nutrients such as chlorophyll a. [9] The movement of krill in various geographic locations result in a movement of energy in the food web. Carbon, caloric, and lipid concentrations vary depending on the specie and the location. Over time, Thysanoessa have been able to adapt to different temperatures in different regions, making their corporal composition change gradually.

Thysanoessa is a genus of krill, containing the following species: 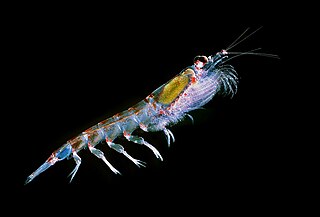 Antarctic krill is a species of krill found in the Antarctic waters of the Southern Ocean. It is a small, swimming crustacean that lives in large schools, called swarms, sometimes reaching densities of 10,000–30,000 individual animals per cubic metre. It feeds directly on minute phytoplankton, thereby using the primary production energy that the phytoplankton originally derived from the sun in order to sustain their pelagic life cycle. It grows to a length of 6 centimetres (2.4 in), weighs up to 2 grams (0.071 oz), and can live for up to six years. It is a key species in the Antarctic ecosystem and in terms of biomass, is one of the most abundant animal species on the planet. 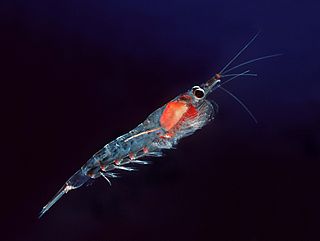 Northern krill, Meganyctiphanes norvegica, is a species of krill that lives in the North Atlantic Ocean. It is an important component of the zooplankton, providing food for whales, fish and birds. M. norvegica is the only species recognised in the genus Meganyctiphanes, although it has been known by several synonyms: 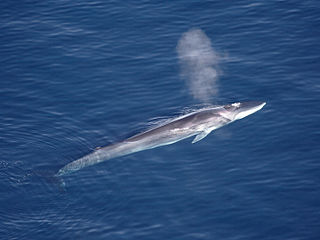 The fin whale, also known as finback whale or common rorqual and formerly known as herring whale or razorback whale, is a cetacean belonging to the parvorder of baleen whales. It is the second-longest species of cetacean on Earth after the blue whale. The largest reportedly grow to 27.3 m (89.6 ft) long with a maximum confirmed length of 25.9 m (85 ft), a maximum recorded weight of nearly 74 tonnes, and a maximum estimated weight of around 114 tonnes. American naturalist Roy Chapman Andrews called the fin whale "the greyhound of the sea ... for its beautiful, slender body is built like a racing yacht and the animal can surpass the speed of the fastest ocean steamship." 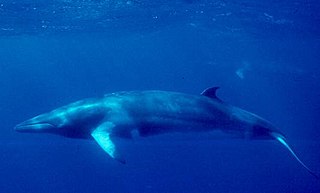 The minke whale, or lesser rorqual, is a species complex of baleen whale. The two species of minke whale are the common minke whale and the Antarctic minke whale. The minke whale was first described by the Danish naturalist Otto Fabricius in 1780, who assumed it must be an already known species and assigned his specimen to Balaena rostrata, a name given to the northern bottlenose whale by Otto Friedrich Müller in 1776. In 1804, Bernard Germain de Lacépède described a juvenile specimen of Balaenoptera acuto-rostrata. The name is a partial translation of Norwegian minkehval, possibly after a Norwegian whaler named Meincke, who mistook a northern minke whale for a blue whale. 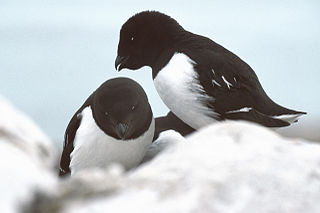 The little auk or dovekie is a small auk, the only member of the genus Alle. Alle is the Sami name of the long-tailed duck; it is onomatopoeic and imitates the call of the drake duck. Linnaeus was not particularly familiar with the winter plumages of either the auk or the duck, and appears to have confused the two species. Other common names include rotch, rotche, and sea dove, although this last sometimes refers to a different auk, the Black Guillemot, instead.

The leopard seal, also referred to as the sea leopard, is the second largest species of seal in the Antarctic. Its only natural predator is the killer whale. It feeds on a wide range of prey including cephalopods, other pinnipeds, sharks, krill, birds and fish. It is the only species in the genus Hydrurga. Its closest relatives are the Ross seal, the crabeater seal and the Weddell seal, which together are known as the tribe of Lobodontini seals. The name hydrurga means "water worker" and leptonyx is the Greek for "thin-clawed".

Lanternfishes are small mesopelagic fish of the large family Myctophidae. One of two families in the order Myctophiformes, the Myctophidae are represented by 246 species in 33 genera, and are found in oceans worldwide. Lanternfishes are aptly named after their conspicuous use of bioluminescence. Their sister family, the Neoscopelidae, are much fewer in number but superficially very similar; at least one neoscopelid shares the common name "lanternfish": the large-scaled lantern fish, Neoscopelus macrolepidotus.

The krill fishery is the commercial fishery of krill, small shrimp-like marine animals that live in the oceans world-wide. The present estimate for the biomass of Antarctic krill is 379 million tonnes. The total global harvest of krill from all fisheries amounts to 150–200,000 tonnes annually, mainly Antarctic krill and North Pacific krill.

Thysanoessa raschii, sometimes known as Arctic krill, is one of the most common euphausiid species of the subarctic and Arctic seas. They may reach 20–25 millimetres (0.8–1.0 in) long, and are sexually mature above 14 mm (0.6 in). 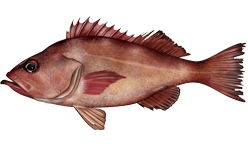 The Pacific ocean perch, also known as the Pacific rockfish, Rose fish, Red bream or Red perch, is a fish whose range spans across the North Pacific : from southern California around the Pacific rim to northern Honshū, Japan, including the Bering Sea. The species appears to be most abundant in northern British Columbia, the Gulf of Alaska, and the Aleutian Islands. 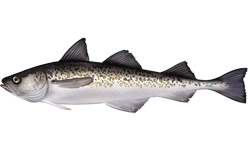 The Alaska pollock or walleye pollock is a marine fish species of the cod genus Gadus and family Gadidae. It is a semi-pelagic schooling fish widely distributed in the North Pacific, with largest concentrations found in the eastern Bering Sea.

Euphausia crystallorophias is a species of krill, sometimes called ice krill, crystal krill, or Antarctic coastal krill. It lives in the coastal waters around Antarctica, further south than any other species of krill. The specimens for the species' original description were collected through holes cut in the ice by Robert Falcon Scott's Discovery Expedition, several thousand having been donated by Thomas Vere Hodgson.

Marrus orthocanna is a species of pelagic siphonophore, a colonial animal composed of a complex arrangement of zooids, some of which are polyps and some medusae. Swimming independently in the mid-ocean, it lives in the Arctic and other cold, deep waters. It is a colonial creature that is born from a single egg which is fertilized. Later on, a protozoan form that eventually grows to form more duplicating members of the colony. It belongs to the order siphonophorae and the family Marrus. Other species in the family include the Marrus antarcticus, Marrus claudanielis, and Marrus orthocannoides.

Mertensia ovum, also known as the Arctic comb jelly or sea nut, is a cydippid comb jelly or ctenophore first described as Beroe ovum by Johan Christian Fabricius in 1780. Unusually among ctenophores, which normally prefer warmer waters, it is found in the Arctic and adjacent polar seas, mostly in surface waters down to 50 metres (160 ft).

The Antarctic lanternfish or Electrona antarctica mainly inhabits the Antarctic deep, warm waters. It is the dominant species in the Southern Ocean. Their life span is about 4–5 years and they mature after 2–3 years. Their maximum length is 12.5 cm. Their feeding depends upon area to area. Small fish primarily feed on copepods, euphausiid larvae, and hyperiids. This species is mainly the nektonic prey species of seabirds in open water. It is an important krill predator and serves as prey for a majority of seabirds. It is one of the southernmost fish species, being recorded as far south as 74°40′S in the Ross Sea. 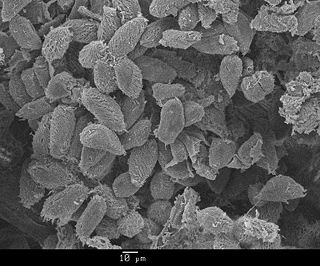 Collinia is a genus of parasitoid ciliates of the Colliniidae family.

Collinia beringensis is a species of parasitoid ciliates of the Colliniidae family. It is an endoparasite of Thysanoessa inermis, a species of krill.

Bettina Meyer is a German Antarctic researcher, best known for her work on the ecology and physiology of invertebrates in the pelagic zone. She is the head of the ecophysiology of pelagic key species working group at the Alfred Wegener Institute for Polar and Marine Research (AWI). 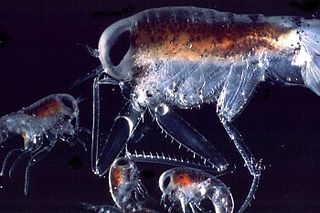 Themisto libellula is a marine amphipod of the family Hyperiidae. The species lives for 2 to 3 years, and grows up to 60 millimetres (2.4 in) over its lifetime. They are found in large quantities in Arctic water.