Tomkins Cove is a hamlet in the Town of Stony Point, Rockland County, New York, United States located north of Stony Point; east of Harriman State Park; south of Doodletown and west of the Hudson River. It is located north-northwest of New York City. The population is approximately 1,739 and the ZIP Code is 10986. The community is served by the 786 exchange in area code 845.

Tomkins Cove comprises approximately 8 square miles (21 km2). Notable areas within the town are Tomkins Lake Colony (a private community with a small lake), Rising Hills Estates, Buckberg Mountain, the Girl Scout Camp (Camp Addisone Boyce), the Town Pool, the Tomkins Cove Library, and Cedar Flats Road. Mott Farm Road extends west from US 9W to Bulsontown Road. A natural gas pipeline runs from the Hudson River into Stony Point. Much of the Tomkins Cove perimeter borders Bear Mountain State Park. Tomkins Cove prides itself on having a cut through of the Appalachian trail which leads into Bear Mountain. It is one of the more rural communities in Rockland County. Tomkins Cove is accessible from Exit 15 on the Palisades Interstate Parkway.

In 1838 Calvin Tomkins and his brother Daniel purchased approximately 20 acres (81,000 m2) of land, located in a cove north of the Stony Point promontory, underlaid with rock suitable for burning along the river shore for the purpose of making lime. The village grew around the works and when the post office was opened at this site, it was named after the founder's name and its location.

According to some geologists from that time, Tomkins Cove had the purest limestone formation in the world, except for certain deposits in Russia.

The Hudson River National Defense Fleet established by an act of Congress in 1946, was first located off Tarrytown, one of eight anchorages in the United States to provide a sizable group of merchant ships to support the military effort at the outset of any war. On April 30, 1946, the Hudson River fleet was moved further north to Jones Point (at one time known as Caldwell's Landing) at the foot of Dunderberg Mountain. The fleet was at its peak with 189 ships in July 1965. Anchored in ten rows, it extended from the fleet office at the Jones Point dock several miles to the south — to the Boulderberg House at Tomkins Cove. Several viewing points were established along Route 9W for the hundreds of motorists who stopped daily to look at the ships. The anchorage remained until the last two ships were towed away on July 8, 1971, to be sold for scrap to Spain. [1]

Rockland County is the southernmost county on the west side of the Hudson River in the U.S. state of New York, part of the New York City Metropolitan Statistical Area. The county's population, as of the 2010 United States Census, was 311,687, increasing to a 2019 Census estimate of 325,789, making it the third-most densely populated county outside New York City within New York State. The county seat is New City. Rockland County is a suburb of New York City that borders the boroughs about 9 miles northwest of the city at their closest points, and is accessible via the New York State Thruway, after 10 exits. The name derives from "rocky land", as the area has been aptly described. 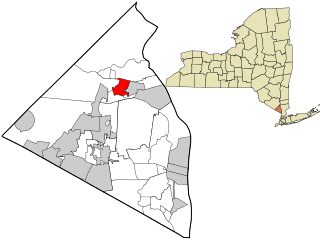 Thiells, known as Thiell's Corner in the 1850s, is a hamlet and census-designated place (CDP) in the town of Haverstraw, Rockland County, New York, United States. It is located north of Mount Ivy, east of Pomona, south of Tomkins Cove, and west of Garnerville. The population was 5,032 as of the 2010 census.

Stony Point is a hamlet and census-designated place in the town of Stony Point, Rockland County, New York, United States. It is located north of West Haverstraw, east of Harriman State Park, south of Tomkins Cove, and west of the Hudson River. The population was 12,147 at the 2010 census.

Stony Point is a town in Rockland County, New York, United States. It is part of the New York City Metropolitan Area. The town is located north of the town of Haverstraw, east and south of Orange County, New York, and west of the Hudson River and Westchester County. The population was 15,059 at the 2010 census. The name of the town is derived from a prominent projection into the Hudson River.

The Palisades Interstate Parkway (PIP) is a 38.25-mile-long (61.56 km) limited-access highway in the U.S. states of New Jersey and New York. The parkway is a major commuter route into New York City from Rockland and Orange counties in New York and Bergen County in New Jersey. The southern terminus of the route is at the George Washington Bridge in Fort Lee, New Jersey, where it connects to Interstate 95 (I-95), Route 4 and US 46. Its northern terminus is at a traffic circle in Fort Montgomery, New York, where the PIP meets US 9W and US 202 at the Bear Mountain Bridge. At exit 18, the PIP forms a concurrency with US 6 for the remaining duration of its run.

U.S. Route 9W (US 9W) is a north–south U.S. Highway in the states of New Jersey and New York. It begins in Fort Lee, New Jersey, as Fletcher Avenue crosses the US 1–9, US 46, and the Interstate 95 (I-95) approaches to the George Washington Bridge, and heads north up the west side of the Hudson River to US 9 in Albany, New York. As its "W" suffix indicates, US 9W is a westerly alternate route of US 9 between the two locations. US 9W directly serves three cities—Newburgh, Kingston, and Albany—and enters the vicinity of several others. As the route heads north, it connects to several highways of regional importance, including I-84, US 209, New York State Route 23 (NY 23), and US 20. Much of US 9W parallels the New York State Thruway and NY 32; additionally, the latter overlaps with US 9W in four different locations.

Haverstraw Bay, located in New York, is the widest portion of the Hudson River. The width of Haverstraw Bay is approximately 3.4 miles. The length approximately 5 miles from river kilometer 58 at Croton Point to river kilometer 66 at Stony Point. The bay is bordered by the village of Haverstraw, in Rockland County, to the west and the village of Croton-on-Hudson, in Westchester County, to the east. 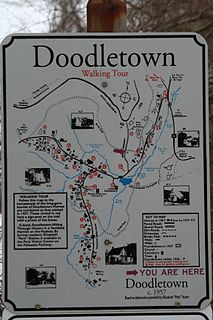 Doodletown was an isolated hamlet in the Town of Stony Point, Rockland County, New York, United States. Purchased by the Palisades Interstate Park Commission during the 1960s, it is now part of Bear Mountain State Park and a popular destination for hikers, birdwatchers, botanists, and local historians. It is located north of Jones Point, west of Iona Island, and southeast of Orange County. The former settlement is now a ghost town.

Iona Island is a 556-acre (2.25 km2) island of the Hudson River in the town of Stony Point, New York, on its west bank. The island is located approximately one mile (1.6 km) south of the Bear Mountain Bridge and is separated from the Hudson's western shore by mudflats and freshwater tidal marshes. It is part of Bear Mountain State Park, although it is occasionally listed separately as Iona Island State Park. From 1899 to 1947 the island was used as the Naval Ammunition Depot Iona Island.

County Route 106 (CR 106) is a 7.8-mile (12.6 km) east–west county route in Rockland County, New York, in the United States. It serves as an eastward continuation of Kanawauke Road, extending from the Orange County line to U.S. Route 9W (US 9W) and US 202 in Stony Point via Harriman State Park. CR 106 intersects with several county highways in Rockland County along the way. The route was only one of two in Rockland County to keep its numbering from Orange County, with the other being CR 72. CR 106 had one spur route, CR 106A, which was recently decommissioned.

Seven Lakes Drive is a north–south parkway located in the Hudson Valley region of New York in the United States. It extends for just under 18 miles (29 km) on a northeast–southwest alignment from an intersection with New York State Route 17 (NY 17) in the village of Sloatsburg to a junction with U.S. Route 9W (US 9W) and US 202 south of the Bear Mountain Bridge in the town of Stony Point. Most of the highway is located in either Harriman or Bear Mountain state parks, except for a small stretch near its western end. Ownership of Seven Lakes Drive is split between three entities, two of which are also responsible for maintenance of the road.

Jones Point is a former hamlet located in the town of Stony Point in Rockland County in the state of New York, United States. Located north of Tomkins Cove; east of Bear Mountain State Park; south of Iona Island; and west of the Hudson River. It is directly across the Hudson River from the city of Peekskill and lies at the foot of Dunderberg Mountain.

Dunderberg Mountain is a 1,086 feet (331 m) mountain on the west bank of the Hudson River at the southern end of the Hudson Highlands. It lies just above Jones Point, New York, within Bear Mountain State Park and the town of Stony Point in Rockland County, New York.

Buckberg mountain is a hill above the Hudson River that played a role in American Revolutionary War strategy concerning the Hudson Highlands.

Grassy Point, was a hamlet on the west side of the Hudson River, in the Town of Stony Point in Rockland County, New York, United States. It was located north of West Haverstraw; east of Harriman State Park; south of Stony Point.

The recorded history of Rockland County, New York begins on February 23, 1798, when the county was formed as an administrative division of the state of New York. It is located 12 miles (19 km) north-northwest of New York City, and is part of the New York Metropolitan Area. The county seat is the hamlet of New City. The name comes from rocky land, an early description of the area given by settlers. Rockland is New York's southernmost county west of the Hudson River. It is suburban in nature, with a considerable amount of scenic designated parkland. Rockland County does not border any of the New York City boroughs, but is only 9.5 miles (15.3 km) north of Manhattan at the counties' two respective closest points