Tony Schumacher (born December 25, 1969), is an American drag racer who is an eight-time NHRA Champion. He is the son of NHRA legend Don Schumacher. He attended Maine South High School in Park Ridge, IL and later St. John's Military Academy in Delafield Wisconsin. He also went to Oakton Community College in Des Plaines, IL. Schumacher is currently the driver of a Top Fuel Dragster seeking sponsorship.

Schumacher is the son of former funny car driver Don Schumacher and drives for his father's multi-team organization. [6] He has been sponsored for several years by the U.S. Army and his intense personality and buzzcut hairstyle has earned him the nickname "Sarge". "The Sarge" nickname originally applied to the dragster, but soon came to be affiliated with the driver himself.

At the end of the 2008 season, he parted ways with longtime crew chief Alan Johnson, who went on to form his own team, Al-Anabi Racing. Al-Anabi Racing consisted of Top Fuel driver Del Worsham and the driver Schumacher considers his biggest rival, Larry Dixon. Many fans and media members felt Schumacher would not have the success he had in previous years as Johnson was the Army Top Fuel team's tuner during his run of five consecutive titles. Schumacher met Dixon and Johnson in the semi-final round early in 2009 at The Strip in Las Vegas, beating his former crew chief's new driver. Schumacher went on to win the event and won the following race in Houston.

The very first race for which Schumacher qualified was in 1996, at the MAC Tools U.S. Nationals, qualifying 16th. However, during that event, tragedy struck during qualifying when then Top Fuel points leader Blaine Johnson was killed in an accident. Schumacher would have raced Blaine the following day. In an emotion-filled moment for all in attendance, Schumacher honored the fallen driver by idling down the track rather than making a full pass. He made it all the way to the finals, before losing to his former DSR teammate, Cory McClenethan.

In 2008, along with the 15-time Funny Car Champion John Force, and retired four-time Funny Car champion and two-time Top Fuel world champion Kenny Bernstein, in concert with NHRA's track safety programs, Schumacher helped to develop a sensor that detects any engine backfire in a nitromethane engine, and takes corrective steps to protect the driver, shutting down the fuel pump, and deploying the parachutes. This experiment was a direct result of the death of the Funny Car driver Scott Kalitta, and according to several drivers should dramatically cut down on the number of accidents caused by engine explosions.

Doug Kalitta dominated throughout 2006, but Schumacher came into the last race on his heels. Kalitta qualified number 1 and Schumacher number 2. Schumacher needed to go two rounds further than Kalitta as well as set a national record in order to win the title. Kalitta would met Schumacher's teammate, Melanie Troxel, in round 3 and lost on a hole shot. That opened the door for Schumacher, who had to beat almost all odds to win the championship. He made it to the final where he had to run a new Top Fuel national record. He won the race and championship

In 2008, Schumacher had the most dominant season in Top Fuel ever. He won 15 events, seven in a row, and visited 18 final rounds. He won at least one round at every race that year. He passed Joe Amato for most championships with six, and most race wins, with 53 after winning in Charlotte, North Carolina.

Schumacher won the 2009 Top Fuel championship in dramatic fashion. He was in contention coming into the last race of the season at Pomona, California. He was tied for first place with his longtime and biggest rival, Larry Dixon. Third place was held by Schumacher's teammate, Cory McClenathan. Fourth place was held by Schumacher's other teammate, Antron Brown. In fifth place was Brandon Bernstein. By the end of qualifying, round 1, Dixon was in front by 1 point. At the end of the qualifying, round 2, Dixon was leading by 2 points. At the end of qualifying, round 3, Dixon was leading by 1 point. At the end of qualifying, round 4, Schumacher was leading by 2 points. Schumacher got ahead with the second quickest run in history, a 3.772. Bernstein was eliminated from the title in qualifying. Brown was eliminated in the 1st round when Schumacher got his round win. Brown was still in contention for the race win, though, and went to the semi-finals to face Schumacher. Dixon and Cory McClenathan squared off in round 2, with the loser being eliminated from the championship. Ultimately, Dixon advanced to the semis to race the strong rookie driver Spencer Massey. Massey defeated Dixon, which gave Schumacher the championship. Brown beat Schumacher in the semi-finals, though, and went on to win the race over Massey.

In 2010, Schumacher was in contention all year long but could not win the championship over his longtime rival Dixon. The Schumacher team as a whole finished 2nd, 3rd and 4th in Top Fuel. After the 2010 season, Cory McClenathan was released by the team and 2009 rookie of the year Spencer Massey took over his spot at the request of DSR team sponsor, Honeywell.

Shirley Muldowney, also known professionally as "Cha Cha" and the "First Lady of Drag Racing", is an American auto racer. She was the first woman to receive a license from the National Hot Rod Association (NHRA) to drive a Top Fuel dragster. She won the NHRA Top Fuel championship in 1977, 1980, and 1982, becoming the first person to win two and three Top Fuel titles. She won a total of 18 NHRA national events. 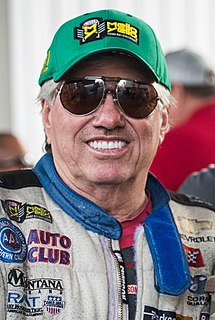 Kenny Bernstein is an American drag racer and former NASCAR and IndyCar team owner. He is nicknamed the "Bud King" for his success in the Budweiser King funny car and dragster. He has also been nicknamed "The King of Speed," because he was the first driver to break 300 miles per hour in the standing-start quarter mile. Bernstein owned King Racing, which he drove for in the NHRA and fielded various cars in other racing series such as IndyCar and NASCAR. Bernstein retired from full-time competition in 2002 and moved his son Brandon into the Bud King Top Fuel dragster, but returned to finish the season in place of his son after Brandon suffered a severe injury. With the exception of a brief return to Funny Car in 2006, Bernstein did not return to the car and instead continued to run his team until the end of the 2011 season when he left drag racing altogether.

Don Prudhomme, nicknamed "The Snake", is an American drag racer.

Gary Scelzi is an American dragster racer and midget car owner who has won the NHRA Camping World Drag Racing Series Top Fuel championship on three occasions and the Funny Car title once. In 1997 he won the title in his first full year of competition, after replacing Blaine Johnson, who had been killed at the 1996 US Nationals, while leading the top fuel championship, in the Johnson family-owned car. He has not competed in NHRA competition since the 2008 season.

Conrad "Connie" Kalitta is an American businessman and former drag racing driver, nicknamed "The Bounty Hunter". Kalitta is the CEO of Kalitta Air and the owner of Kalitta Motorsports. 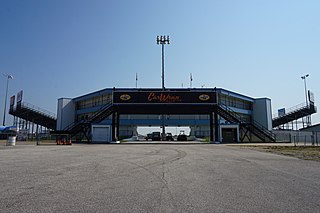 The Texas Motorplex is a quarter mile drag racing facility located in Ennis, Texas, United States, 40 miles (64 km) south of downtown Dallas. Built in 1986 by former funny car driver Billy Meyer, the Motorplex was the first National Hot Rod Association (NHRA) "super track." It annually hosts the AAA Texas NHRA FallNationals each October, when hundreds of professional and amateur drag racers compete for over $2 million in prize money. Past winners have included John Force, Kenny Bernstein, and Tony Schumacher. Perhaps the one identifying feature of the track, is that from the burnout pad, to the shutdown area, it is the only all concrete strip within the NHRA's schedule of events. 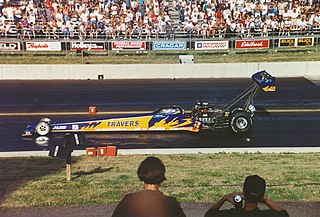 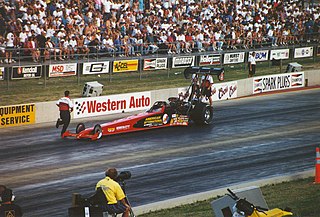 Larry Dixon Jr. is an American professional drag racer in the NHRA. Larry is the son of Larry Dixon Sr., who won Top Fuel Eliminator at the 1970 NHRA Winternationals.

Maple Grove Raceway is a quarter-mile dragstrip located near Mohnton, Pennsylvania, just outside Reading. It opened in 1962 as a 1/5-mile dragstrip. It was eventually lengthened to its current quarter-mile length in 1964. The track has been sanctioned by the National Hot Rod Association for most of its existence. It has hosted an NHRA national event since 1985. Uni-Select Auto Plus came aboard as the Nationals sponsor in 2011. Other key events include the American Drag Racing League, the NHRA Lucas Oil Drag Racing Series, the Geezers Reunion at The Grove, the Super Chevy Show, Mopar Action, Fun Ford Weekend and the NHRA Pennsylvania Dutch Classic.

Chris Karamesines is an American drag racer and one of NHRA's early pioneers and nicknamed "The Golden Greek" or just simply "Greek". In 2009, he became the first driver in NHRA history to compete and become the fastest driver at over 78 years old at the final event of the 2009 season at Pomona driving in the Top Fuel category. But he would lose in the first round against Brandon Bernstein. The following year, he made an attempt at Firebird International Raceway in Arizona and made the field, but again lost in the first round. Karamesines would break his own record in 2018 at Brainerd Raceway, running a 305 mile per hour pass at 86 years old.

Del Worsham is an American NHRA Funny car driver who began his professional career as a driver in Pomona, California, in 1990. Worsham drives a Lucas Oil sponsored car Worsham Racing, a family team. Through the first five races of the 2011 season, he has amassed 33 career victories, eight in the Top Fuel Series and 25 in the Funny Car Series. In 1991, Worsham became the youngest driver to win a Funny Car event and went on to win the NHRA Rookie of the Year. His best finish in the Point Standings first came in 2011 when he won the NHRA Full Throttle Championship in Top Fuel. In 2015, Worsham won the NHRA Mello Yello Championship in Funny Car. He became the third driver to win championships in both Top Fuel and Funny Car, joining Kenny Bernstein and Gary Scelzi in this category.

Melanie Troxel is a drag racer, who has raced in Top Fuel, Funny Car and Pro Modified. She is the only woman to have won races in both Top Fuel and Funny Car. She was named Individual Sportswoman of the Year 2006 by the Women's Sports Foundation after becoming the first drive to appear in five consecutive championship finals that year.

Ed McCulloch, nicknamed "The Ace", is an American dragster and funny car driver.