Last updated April 14, 2021
Cut of beef from the primal loin or subprimal sirloin

Top sirloin is a cut of beef from the primal loin or subprimal sirloin. Top sirloin steaks differ from sirloin steaks in that the bone and the tenderloin and bottom round muscles have been removed; the remaining major muscles are the gluteus medius and biceps femoris (top sirloin cap steak).

The word comes from the Middle English surloine , which itself was derived from the Old French word surlonge , meaning sur longe or above the loin. [3] In Modern French, the term evolved to become aloyau or faux-filet. [4]

An often quoted false etymology suggests that sirloin comes from the knighting by an English king (various kings are cited) of a piece of meat. [5] [3] However, the English cut of sirloin includes the large portion of beef which includes the short loin, top sirloin and bottom sirloin. 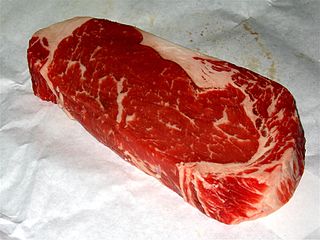 A beefsteak, often called just steak, is a flat cut of beef with parallel faces, usually cut perpendicular to the muscle fibers. In common restaurant service a single serving will have a raw mass ranging from 120 to 600 grams. Beef steaks are usually grilled, pan fried, or broiled. The more tender cuts from the loin and rib are cooked quickly, using dry heat, and served whole. Less tender cuts from the chuck or round are cooked with moist heat or are mechanically tenderized. 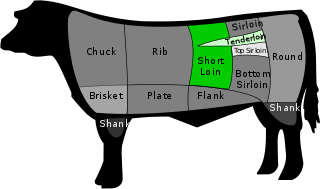 The T-bone and porterhouse are steaks of beef cut from the short loin. Both steaks include a "T"-shaped lumbar vertebra with sections of abdominal internal oblique muscle on each side. Porterhouse steaks are cut from the rear end of the short loin and thus include more tenderloin steak, along with a large strip steak. T-bone steaks are cut closer to the front, and contain a smaller section of tenderloin. The smaller portion of a T-bone, when sold alone, is known as a filet mignon, especially if cut from the small forward end of the tenderloin. 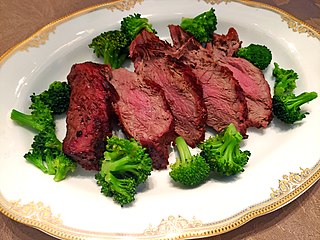 Chateaubriand is a dish that traditionally consists of a large center cut fillet of tenderloin grilled between two lesser pieces of meat that are discarded after cooking. While the term originally referred to the preparation of the dish, Auguste Escoffier named the specific center cut of the tenderloin the Chateaubriand. 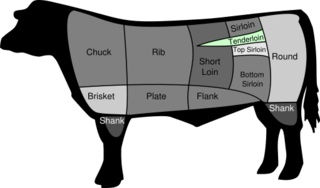 A beef tenderloin, known as an eye fillet in Australasia, filet in France, Filet Mignon in Brazil, and fillet in the United Kingdom and South Africa, is cut from the loin of beef. 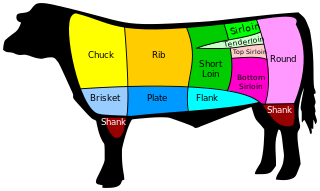 The sirloin steak is cut from the sirloin, the subprimal posterior to the short loin where the T-bone, porterhouse, and club steaks are cut. The sirloin is actually divided into several types of steak. The top sirloin is the most prized of these and is specifically marked for sale under that name. The bottom sirloin, which is less tender and much larger, is typically marked for sale simply as "sirloin steak". The bottom sirloin, in turn, connects to the sirloin tip roast.

The strip steak is a cut of beef steaks from the short loin from a cow. It consists of a muscle that does little work, the longissimus, making the meat particularly tender, although not as tender as the nearby psoas major or tenderloin. Unlike the tenderloin, the longissimus is a sizable muscle, allowing it to be cut into larger portions.

Sir Loin, sirloin, or variant, may refer to: 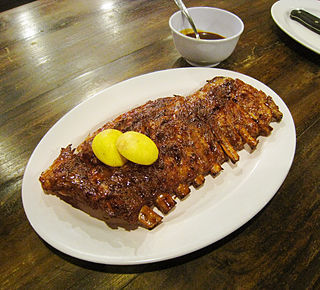 The loins, or lumbus, are the sides between the lower ribs and pelvis, and the lower part of the back. The term is used to describe the anatomy of humans and quadrupeds, such as horses, pigs, or cattle. The anatomical reference also applies to particular cuts of meat, including tenderloin or sirloin steak.

The tri-tip is a triangular cut of beef from the bottom sirloin subprimal cut, consisting of the tensor fasciae latae muscle. Untrimmed, the tri-tip weighs around 5 pounds. In the U.S., the tri-tip is taken from NAMP cut 185C.

A round steak is a beef steak from the "round", the rear leg of the cow. The round is divided into cuts including the eye (of) round, bottom round, and top round, with or without the "round" bone (femur), and may include the knuckle, depending on how the round is separated from the loin. This is a lean cut and it is moderately tough. Lack of fat and marbling makes round dry out when cooked with dry-heat cooking methods like roasting or grilling. Round steak is commonly prepared with slow moist-heat methods including braising, to tenderize the meat and maintain moisture. The cut is often sliced thin, then dried or smoked at low temperature to make jerky.

Picanha is a cut of beef first made popular in Brazil, and later adopted in Portugal.

During butchering, beef is first divided into primal cuts, pieces of meat initially separated from the carcass. These are basic sections from which steaks and other subdivisions are cut. The term "primal cut" is quite different from "prime cut", used to characterize cuts considered to be of higher quality. Since the animal's legs and neck muscles do the most work, they are the toughest; the meat becomes more tender as distance from hoof and horn increases. Different countries and cuisines have different cuts and names, and sometimes use the same name for a different cut; e.g., the cut described as "brisket" in the US is from a significantly different part of the carcass than British "brisket". "Cut" often refers narrowly to skeletal muscle, but can also include other edible flesh, such as offal or bones without significant muscles attached.

Short loin is the American name for a cut of beef that comes from the back of the cattle. It contains part of the spine and includes the top loin and the tenderloin. This cut yields types of steak including porterhouse, strip steak, and T-bone. The T-bone is a cut that contains less of the tenderloin than does the porterhouse. Webster's Dictionary defines it as "a portion of the hindquarter of beef immediately behind the ribs that is usually cut into steaks." The short loin is considered a tender beef.

A primal cut or cut of meat is a piece of meat initially separated from the carcass of an animal during butchering. Examples of primals include the round, loin, rib, and chuck for beef or the ham, loin, Boston butt, and picnic for pork. 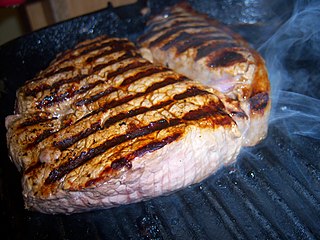 Rump steak is a cut of beef. The rump is the division between the leg and the chine cut right through the aitch bone It may refer to: 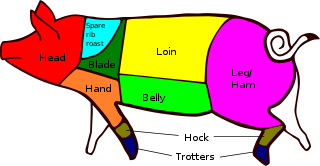 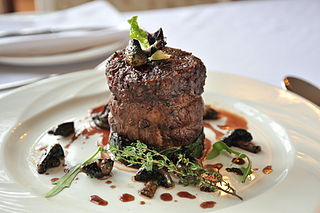 A steak is a meat generally sliced across the muscle fibers, potentially including a bone. It is normally grilled, though can also be pan-fried. It is often grilled in an attempt to replicate the flavor of steak cooked over the glowing coals of an open fire. Steak can also be cooked in sauce, such as in steak and kidney pie, or minced and formed into patties, such as hamburgers.

Beef alternative merchandising, sometimes shortened to BAM, is a method of fabricating sirloins, strip loins, and ribeyes into smaller cuts of meat created by the beef checkoff. The system was designed to appeal to consumers who are concerned about the portion sizes of these three cuts by dividing them into smaller steaks based on the individual muscles that compose the larger steaks. These cuts have an added bonus of reducing the cost of the meat for the consumer while simultaneously increading profits for the butcher. 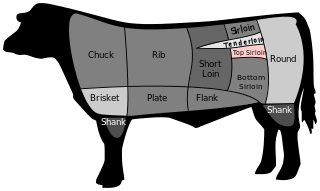