The Union of Right Forces (SPS; Russian : Союз правых сил; СПС; Soyuz pravykh sil, SPS), is a Russian liberal-conservative [1] political public organization and former party, initially founded as an electoral bloc in 1999 and associated with free market reforms, privatization, and the legacy of the "young reformers" of the 1990s: Anatoly Chubais, Boris Nemtsov, and Yegor Gaidar. The party officially self-dissolved in 2008. Nikita Belykh was the party's last leader from 2005 to 2008.

In 2011, the SPS was refounded by some of its former members as the Union of Right Forces Movement. In 2012, it was registered as a political public organization, a type of NGO. In Russia, participation in elections requires being accepted into the list of political parties controlled by the Ministry of Justice. The current leader of the SPS is Leonid Gozman.[ citation needed ]

Both the former SPS and the refounded SPS were accepted as an associate member of the International Democrat Union.

The SPS was established in 1999, following a merger of several smaller liberal parties, including Democratic Choice of Russia and Democratic Russia. In the 1999 parliamentary elections the SPS won 8.6% of the vote and 32 seats in the Russian State Duma (lower house of the Federal Assembly of Russia).[ citation needed ]

In the 2000 presidential election, the SPS supported Vladimir Putin's candidacy, though many of the party leaders supported Grigory Yavlinsky. The SPS parliamentarians overwhelmingly voted against reintroducing the Soviet-era national anthem in 2000.[ citation needed ]

The SPS was led by former Deputy Prime Minister Boris Nemtsov from 2000 to 2003. During this time SPS strongly opposed what it saw to be the authoritarian policies of President Vladimir Putin, and argued that political and media freedoms in Russia had been curtailed.[ citation needed ]

In the 2003 parliamentary elections the SPS, according to official results, received 4% of the vote and failed to cross the 5% threshold necessary for parliamentary representation. A number of SPS candidates came second in single-mandate electoral districts the party had previously held, such as Irina Khakamada in St. Petersburg, Vladimir V. Kara-Murza in Moscow, or Boris Nadezhdin in the Moscow region. Despite allegations of fraud, Boris Nemtsov accepted responsibility for the election defeat and resigned as SPS leader in January 2004. On 28 May 2005 Nikita Belykh was elected as the new leader of the party.[ citation needed ]

The party won 0.96% of votes in the 2007 elections, not breaking the 7% barrier, and thus received no seats in the Duma.

In 2008, Nikita Belyh left his chair to Leonid Gozman. On 1 October 2008, the federal political council of the party voted to dissolve the party and merge it with Civilian Power and Democratic Party of Russia, forming a new liberal-democratic party called Right Cause, [4] which succeeded the SPS as a member of the International Democrat Union.

In 2011, a group of former members accused the Right Cause of being too close to the Russian government under Vladimir Putin and refounded the SPS, registering it as a political public organization. As a consequence, the International Democrat Union suspended the membership of the Right Cause and returned it to the new SPS.[ citation needed ]

On 27 February 2014, the SPS formally condemned the 2014 Russian military intervention in Ukraine. [5]

United Russia is the ruling political party of Russia and has been since the early years of Vladimir Putin's presidency. United Russia is the largest party in Russia, and as of 2021 it holds 336 of the 450 seats in the State Duma, having constituted the majority in the chamber since 2007. The party formed in December 2001 through a merger of the Unity and the Fatherland – All Russia parties.

The Russian United Democratic Party "Yabloko" is a social-liberal political party in Russia founded by former Soviet Deputy Prime Minister Grigory Yavlinsky, as well as two Senators, and currently led by Nikolay Rybakov. The party's logo consists of a red circle and a green isosceles triangle, suggesting an apple in a constructivist style, a nod to the party's name which is the Russian word for "apple". Yabloko’s party platform stands for a social market economy, fair competition in politics and the economy, is for the inviolability of private property, and for equal opportunity.

Grigory Alexeyevich Yavlinsky is a Russian economist and politician. 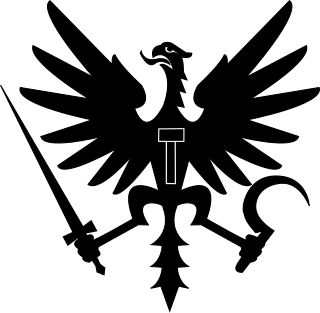 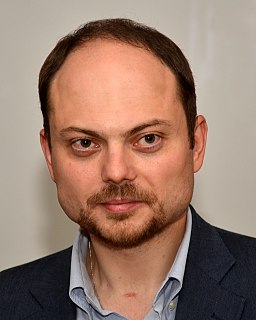 Vladimir Vladimirovich Kara-Murza is a Russian opposition politician and Boris Nemtsov’s protégé. He serves as vice-chairman of Open Russia, a NGO founded by Russian businessman and former oligarch Mikhail Khodorkovsky, which promotes civil society and democracy in Russia. He was elected to the Coordinating Council of the Russian Opposition in 2012, and served as deputy leader of the People's Freedom Party from 2015 to 2016. He is the author of two documentaries, They Chose Freedom and Nemtsov. As of 2021 he acts as Senior Fellow to the Raoul Wallenberg Centre for Human Rights. He was awarded the Civil Courage Prize in 2018.

Boris Yefimovich Nemtsov was a Russian physicist and liberal politician. Nemtsov was one of the most important figures in the introduction of reforms into the Russian post-Soviet economy. He had a successful political career in the 1990s under President Boris Yeltsin. From 2000 until his death, he was an outspoken critic of Vladimir Putin. Nemtsov was assassinated on 27 February 2015, beside his Ukrainian partner Anna Durytska, on a bridge near the Kremlin in Moscow, with four shots fired from the back. In the weeks before his death, Nemtsov expressed fear that Putin would have him killed. In late June 2017, five Chechnya-born men were found guilty by a jury in a Moscow court for agreeing to kill Nemtsov in exchange for 15 million rubles (US$253,000); neither the identity nor whereabouts of the person who hired them is officially known.

"Committee 2008: A Free Choice" was an umbrella organization of the Russian democratic opposition, launched on 29 January 2004 and broke up in the spring of 2005.

Nikita Yurevich Belykh is a Russian politician and former leader of the Union of Rightist Forces party. He was a member of the Legislative Assembly of Perm Krai until 2008, and the governor of Kirov Oblast from January 2009 until his arrest in July 2016.

Legislative elections were held in the Russian Federation on 2 December 2007. At stake were the 450 seats in the 5th State Duma, the lower house of the Federal Assembly. Eleven parties were included in the ballot, including Russia's largest party, United Russia, which was supported by President of Russia Vladimir Putin. Official results showed that United Russia won 64.3% of the votes, the Communist Party of the Russian Federation 11.6%, the Liberal Democratic Party of Russia 8.1%, and Fair Russia won 7.7%, and none of the other parties won enough votes to gain any seats.

Party of Growth (Russian: Партия Роста; Partiya Rosta is a liberal-conservative centre-right political party in Russia with representatives in several local legislatures. Created in February–March 2016 on the basis of the Right Cause party, the party's main policy stances are liberal free market economy, democracy and protecting the rights of the middle class. Although widely regarded as a pro-Kremlin party, it has already found itself in opposition to the presidential administration on several occasions.

United Democratic Movement «Solidarnost» is a Russian liberal democratic political movement founded on 13 December 2008 by a number of well-known members of the liberal democratic opposition, including Garry Kasparov, Boris Nemtsov and others from the Yabloko and Union of Right Forces parties, leaders of the Dissenters March events, the Committee 2008, the People's Democratic Union, the United Civil Front, The Other Russia and other politicians and political groups.

Democratic Russia was the generic name for several political entities that played a transformative role in Russia's transition from Communist rule.

People's Freedom Party "For Russia without Lawlessness and Corruption" was a liberal-democratic political party in Russia founded on 13 December 2010 by opposition politicians Vladimir Ryzhkov, Boris Nemtsov, Mikhail Kasyanov and Vladimir Milov and de facto dissolved on 16 June 2012. The name is a reference to the original liberal-democratic Party of Popular Freedom. 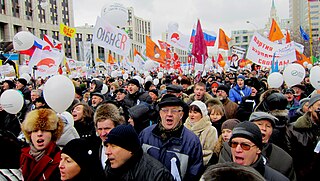 The 2011–2013 Russian protests, which some English language media referred to as the Snow Revolution, began in 2011 and continued into 2012 and 2013. The protests were motivated by claims by Russian and foreign journalists, political activists and members of the public that the election process was flawed. The Central Election Commission of Russia stated that only 11.5% of official reports of fraud could be confirmed as true.

Opposition to the government of President Vladimir Putin in Russia can be divided between the parliamentary opposition parties in the State Duma and the various non-systemic opposition organizations. While the former are largely viewed as being more or less loyal to the government and Putin, the latter oppose the government and are mostly unrepresented in government bodies. Major political parties considered to be part of the non-systemic opposition include Yabloko and the People's Freedom Party, along with the unregistered party Russia of the Future and Libertarian Party of Russia. Other notable opposition groups included the Russian Opposition Coordination Council (2012–13) and The Other Russia (2006–11), as well as various non-governmental organizations (NGOs).

The All-Russian Political Party «Right Cause» was the officially registered center-right Russian political party that existed in 2008-2016, created on the basis of three parties, which declared a liberal orientation. 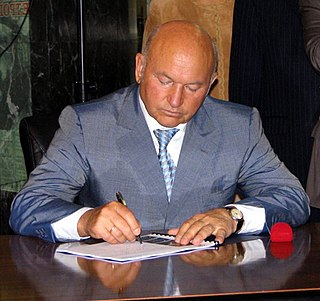 The Moscow legislative election of 2009 was held October 11 of that year to the Moscow City Duma. On party lists were elected 18 of the 35 deputies, 17 deputies were in single-member constituencies. To get into the City Duma parties need to overcome the 7% threshold. The term of office of the new City Duma is five years. It had been four years.