The untitled Hasbro cinematic universe is an American film franchise and shared universe that is centered on a series of films distributed by Paramount Pictures and Metro-Goldwyn-Mayer. Those films are based on brands from the toy company Hasbro.

A shared universe or shared world is a set of creative works where more than one writer independently contributes a work that can stand alone but fits into the joint development of the storyline, characters, or world of the overall project. It is common in genres like science fiction.

Paramount Pictures Corporation is an American film studio based in Hollywood, California, that has been a subsidiary of the American media conglomerate Viacom since 1994. Paramount is the fifth oldest surviving film studio in the world, the second oldest in the United States, and the sole member of the "Big Five" film studios still located in the Los Angeles neighborhood of Hollywood.

On December 15, 2015, Hasbro Studios and Paramount Pictures had agreed to a deal creating a shared cinematic universe based on G.I. Joe , Micronauts , Visionairies , M.A.S.K. and Rom . [1]

G.I. Joe is a line of action figures produced and owned by the toy company Hasbro. The initial product offering represented four of the branches of the U.S. armed forces with the Action Soldier, Action Sailor, Action Pilot, Action Marine and later on, the Action Nurse. The name derived from the usage of "G.I. Joe" for the generic U.S. soldier, itself derived from the more general term "G.I.". The development of G.I. Joe led to the coining of the term "action figure". G.I. Joe's appeal to children has made it an American icon among toys.

Micronauts was a North American science fiction toyline manufactured and marketed by Mego from 1976 to 1980. The Micronauts toyline was based on and licensed from the Microman toyline created by Japanese-based toy company Takara in 1974.

Visionaries: Knights of the Magical Light is a science fantasy media franchise that consisted of a short-lived toyline of action figures and vehicles produced by Hasbro, and an animated television series by Sunbow Productions that ran for one season of thirteen episodes in 1987, while Star Comics published a bimonthly comic book series that lasted six issues from November 1987 to September 1988. The animated series was the only Hasbro property to be produced by Sunbow without the aid of Marvel Productions, and utilized Japanese studio TMS Entertainment for overseas animation work.

Michael Chabon is an American novelist and short story writer.

John Francis Daley is an American actor, screenwriter, comedian and film director. He is known for playing high school freshman Sam Weir on the NBC comedy-drama Freaks and Geeks and FBI criminal profiler Dr. Lance Sweets on the series Bones, for which he was nominated for a 2014 PRISM Award. He plays keyboards and sings for the band Dayplayer. 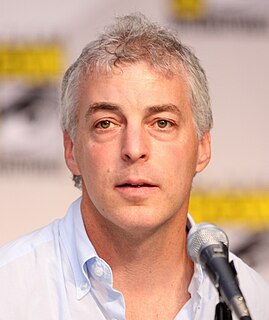 Jeff Pinkner is an American television and movie writer and producer.

On March 28, 2013, G.I. Joe: Retaliation producer Lorenzo di Bonaventura announced that he is open to doing a crossover between G.I. Joe with the Transformers film series, which is also owned by Paramount Pictures. On July 26, 2013, G.I. Joe: Retaliation director Jon M. Chu stated that he is also interested in directing that crossover film. [5] [6]

Lorenzo di Bonaventura is an American film producer and founder of his company Di Bonaventura Pictures. He is known for producing the Transformers film series.

Transformers is a series of American science fiction action films based on Transformers franchise which began in the 1980s. Michael Bay has directed the first five films: Transformers (2007), Revenge of the Fallen (2009), Dark of the Moon (2011), Age of Extinction (2014) and The Last Knight (2017). A spin-off film, Bumblebee, directed by Travis Knight and produced by Bay, was released on December 21, 2018. The series has been distributed by Paramount Pictures and DreamWorks. Aside from Bumblebee, which received positive reviews, the Transformers series has received negative to mixed reception. It is the 13th-highest-grossing film series, with a total of $4.3 billion; two films in the series have individually grossed over $1 billion.

Jonathan Murray Chu is an American filmmaker who directed the films Step Up 2: The Streets, Step Up 3D, Justin Bieber: Never Say Never, Hasbro franchises Jem and the Holograms and G.I. Joe: Retaliation, his latest work being Crazy Rich Asians. Chu is an alumnus of the University of Southern California School of Cinema-Television. There, he won the Princess Grace Award, the Dore Schary Award presented by the Anti-Defamation League, the Jack Nicholson directing award, and was recognized as an honoree for the IFP/West program Project: Involve.

On June 2014, di Bonaventura stated that a crossover was not likely to happen, but it was still a possibility. [7] [8]

On October 2015, Chu confirmed his intentions to include Jem and the Holograms (owned by Universal Pictures) into the crossover film, besides hinting about Transformers possibly doing crossovers with other Hasbro products. [9] [10]

Jem and the Holograms is a 2015 American musical fantasy film produced and directed by Jon M. Chu, written by Ryan Landels, and starring Aubrey Peeples, Stefanie Scott, Hayley Kiyoko, Aurora Perrineau, Ryan Guzman, Molly Ringwald, and Juliette Lewis. Borrowing elements from the 1980s animated television series Jem by Christy Marx, the film was produced by Hasbro Studios and Blumhouse Productions. Chu's interest in developing a film adaptation of Jem is based on having grown up watching the original animated series with his sisters. He had attempted to make the film 11 years earlier, but was rejected by Universal due to the cost.

Universal Pictures is an American film studio owned by Comcast through the Universal Filmed Entertainment Group division of its wholly owned subsidiary NBCUniversal. Founded in 1912 by Carl Laemmle, Mark Dintenfass, Charles O. Baumann, Adam Kessel, Pat Powers, William Swanson, David Horsley, Robert H. Cochrane, and Jules Brulatour, it is the oldest surviving film studio in the United States, the world's fifth oldest after Gaumont, Pathé, Titanus, and Nordisk Film, and the oldest member of Hollywood's "Big Five" studios in terms of the overall film market. Its studios are located in Universal City, California, and its corporate offices are located in New York City.

However, on May 23, 2018, Paramount officially removed Transformers 6 from their release schedule, leaving the future of the franchise unknown.