The Wearside Football League is a non-league football competition based in England. It consists of a single division which sits at step 7 (or level 11) of the National League System and is a feeder to the Northern League Division Two. The league has had a second division in the past but currently only operates with one. For the 2018-19 season, 16 clubs are due to compete in the league. In December 2017 it was decided that the Wearside League and Durham Alliance Combination League would merge. The Durham Alliance Combination League would then become a feeder league for the Wearside League and would be known as the Durham and Wearside Development Division. It was thought that by doing this it would allow a natural route for promotion into the FA National League system. [1]

Predominantly the league covers a much larger area than just Wearside; as of 2018-19 it includes clubs as far south as North Yorkshire.

The league also operates three cup competitions: the Monkwearmouth Charity Cup and the Shipowners' Charity Cup, both of which have been contested since the 1890s, and the League Challenge Cup, which came into being in the 1930s.

The Wearside League came into being in 1892 at the instigation of Charles Kirtley, secretary of Sunderland Swifts. In June 1892, a letter written by Kirtley was published in the Sunderland Daily Post and The Herald in which he stated that he had been asked by several club secretaries about the possibility of forming an organisation to play home-and-home matches, so as to find out which was the best amateur team. [2] A similar letter was published in the Sunderland Daily Echo. At a meeting soon afterwards at the Central Coffee Tavern, eleven clubs agreed to form a league, which commenced playing later that year.

During the early years of the league most teams were extremely hard-up, and the league's archive records that one early club had no pitch but instead played on the sands by Sunderland Docks, and another had to play with an old rugby ball as they could not afford an association football ball. By the 20th century, however, the league was better off and was even able to organise matches to benefit local charities during World War I. After the Great War, the league was dominated for many years by colliery welfare teams – in the 1930s every league title was won by a pit team and the mining clubs continued to dominate right through to the 1970s, although an increasing number began to experience financial difficulties from the 1950s onwards due to shrinking workforces at the mines.

In 1964 the North Eastern League was disbanded and a number of its former teams joined the Wearside League. Around this time the team of the 24th Signal Regiment spent one season in the league but then had to withdraw as most of their players were posted overseas. In 1978 Blue Star became the first Wearside League club to reach the final of the FA Vase, and went on to win the trophy, the start of a run of success which would ultimately see them progress much higher up the non-league ranks. Three years later Whickham repeated the feat and also soon moved up to higher leagues. More recently, clubs such as Darlington Railway Athletic, North Shields, Newton Aycliffe, Ryhope Colliery Welfare and Willington have successfully moved up to the Northern League.

This is a list of champions since World War II.

Darlington Town formerly known as Horden Colliery Welfare Association Football Club, Horden Athletic and recently known as the Reserve team for Darlington F.C. is a football club based in Darlington, in County Durham, England. The club was formed in 1908 and joined the North Eastern League in 1935, reaching the second round of the FA Cup in the 1938–39 season. They are currently members of the Wearside League Division One and play at Eastbourne Sports Complex in Darlington

Washington Football Club is a football club based in Washington, Tyne and Wear, England. The club was formed by the local miners at the local "F-Pit" Colliery in the early 20th century as Washington Colliery F.C. The clubs distinctive red colours were agreed upon on formation and a codicil written making the team strip of red shirts being in existence in Perpetuity. The modern club was established in 1947 and joined the Wearside League in 1968. In the 1977–78 season, they reached the third round of the FA Vase. The club won promotion to the Northern Football League Division One after winning their last seven games of the 2014–15 season. It was their highest league standing since the 2003–04 season.

North Shields Football Club is a football club based in North Shields, Tyne and Wear, England. They have reached the 1st round of the FA Cup twice in their history: in 1933–34 and 1982–83. Following their promotion from Northern League Division Two, they currently compete in Northern League Division One. They also won the FA Amateur Cup at Wembley in 1969, beating Sutton United. In the 2014–15 season, North Shields repeated their 1969 success by defeating Glossop North End at Wembley in the final of the FA Vase.

The Durham County Challenge Cup is an annual football competition held between the clubs of the Durham County Football Association which was first played in 1884. It is the senior county cup for the historic county of Durham, which includes Durham, Darlington, Gateshead, Hartlepool, South Tyneside, Stockton-on-Tees, and Sunderland. The first winners were Sunderland.

Ryhope Colliery Welfare Football Club are a association football club based in Ryhope, Sunderland, in England. They play in the Northern League.

George Smith was an English footballer who played as a left half or centre half in the Football League for Watford, Clapton Orient and Darlington. He also played non-league football for Easington Colliery Welfare, Yeovil & Petters United and Bath City.

George Edward Turnbull was an English footballer who played as a centre forward or inside left in the Football League for Rochdale and Darlington. He had trials with Newcastle United and Guildford City, and played non-league football for clubs including Sunderland Forge, Bank Head Albion, Shiney Row Swifts, Easington Colliery Welfare and Sunderland Electrical Undertaking.

Alan Parkes was an English footballer who played as a centre forward in the Football League for Darlington and in non-league football for Murton Colliery Welfare and Tonbridge. He was on the books of Sunderland and Charlton Athletic without representing them in League football.

William Laverick, commonly known as Bill or Billy Laverick, was an English footballer who played as an outside left in the Football League for Ashington and Halifax Town. He also played non-league football for clubs including Pelton Fell, Annfield Plain, Darlington, Chester-le-Street Town, West Stanley and Murton Colliery Welfare. 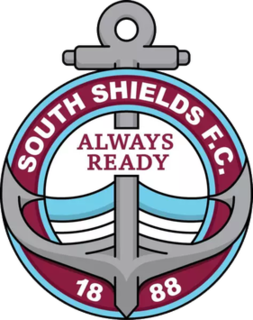 South Shields Football Club is a football club based in South Shields, Tyne and Wear, England. The third club of this name, it was formed in 1974 and plays its home matches at the 1st Cloud Arena, formerly known as Mariners Park and before that, Filtrona Park. South Shields currently play in the Northern Premier League Premier Division.

Donald Maddison was an English footballer who played as a goalkeeper in the Football League for Darlington and in the Scottish C Division for Berwick Rangers.