The Man Who Disappeared was a 1914 American drama film serial directed by Charles Brabin. The film is considered lost.

Harry Temple Morey was an American stage and motion picture actor who appeared in nearly two hundred films during his career. 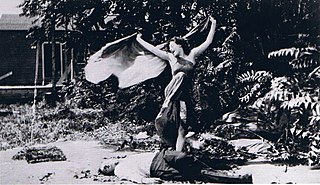 The Vampire is an American silent film drama, directed by Robert G. Vignola, based on the 1897 eponymous poem by Rudyard Kipling. It stars Alice Hollister and Harry F. Millarde. It is generally considered the first recognized film depicting the vamp character, also known as femme fatale.

Headlines is a 1925 silent film adventure and crime-drama directed by Edward H. Griffith and starring Alice Joyce and Malcolm McGregor. It was distributed through Pathé Exchange.

Who Shall Take My Life? is a 1917 American silent drama film directed by Colin Campbell and starring Tom Santschi, Fritzi Brunette and Edward Coxen. 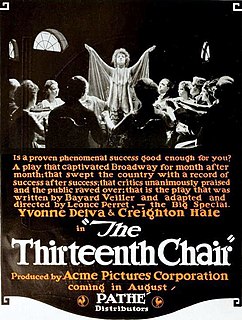 The Thirteenth Chair is a 1919 American silent mystery film directed by Léonce Perret and starring Yvonne Delva, Creighton Hale and Marie Shotwell. It was based on a play of the same name by Bayard Veiller. Subsequent film adaptations were made in 1929 as The Thirteenth Chair and 1937 again under the same title.

The Fettered Woman is a 1917 American silent drama film directed by Tom Terriss and starring Alice Joyce, Webster Campbell and Donald MacBride. Based on the 1914 novel Anne's Bridge by Robert W. Chambers, It is now considered a lost film.