Yeti Airlines Flight 691 was a scheduled domestic passenger flight from Kathmandu to Pokhara in Nepal. On 15 January 2023, the aircraft being operated on the route, an ATR 72 flown by Yeti Airlines, crashed while landing at Pokhara, killing all 72 occupants on board. It is the deadliest accident involving an ATR 72.

The flight took off from Kathmandu's Tribhuvan International Airport at 10:33 am NST. [4] It crashed on the bank of the Seti Gandaki River while on final approach to landing at Pokhara International Airport. [5] A video taken from the ground showed the aircraft banking steeply to the left before crashing. [2] [6] Another video was streamed live on Facebook by Sonu Jaiswal, a passenger on the plane, before and during the crash. The video shows passengers unaware of the situation until seconds before impact. [7]

The crash occurred in Gandaki Province between the old Pokhara Airport and the new Pokhara International Airport, which was opened two weeks earlier and also where the aircraft was intending to land. [8] [9] The accident resulted in the deaths of all 72 people on board, [10] and was Nepal's worst aviation accident since the crash of Pakistan International Airlines Flight 268 in 1992, [11] the deadliest aviation accident in Nepalese domestic aviation, [12] and the deadliest accident involving an ATR 72. [13]

According to an official at the Pokhara International Airport, air traffic control cleared the flight to land on runway 30 heading from east to west, but the captain requested the opposing runway 12 heading from west to east, minutes before the crash. A Civil Aviation Authority of Nepal spokesperson said: "The weather was clear; according to preliminary information the cause of the crash is the technical issue of the plane." [14]

Flight-tracking organisation Flightradar24 noted that during the flight the aircraft had been transmitting inaccurate speed and altitude data. [15]

The plane was under the command of senior captain Kamal KC with Anju Khatiwada, 44, as copilot. Khatiwada's husband, Dipak Pokhrel, who also worked for Yeti Airlines, died in the 2006 Yeti Airlines Twin Otter crash. Khatiwada was set to qualify as a captain upon the successful completion of the flight. [22]

The United States Department of State announced that two U.S. citizens died in the crash, [31] although Nepalese authorities did not report any American death. [32]

The airport was closed as authorities launched a rescue operation. [33] The Government of Nepal summoned an emergency cabinet meeting following the crash. Prime Minister Pushpa Kamal Dahal said he was deeply saddened by the tragic accident. [21]

The Office of the Prime Minister declared 16 January to be a national day of mourning to pay respect to those who died in the crash. The flag of Nepal was flown at half-staff. [34] Yeti Airlines cancelled all regular flights scheduled for 16 January. [21]

A five-member committee headed by Nagendra Ghimire is investigating the crash for the government of Nepal with the participation of the French Bureau of Enquiry and Analysis for Civil Aviation Safety. [35]

Amit Singh, an experienced pilot and founder of India's Safety Matters Foundation, speculated that the smartphone livestream, taken moments before and during the crash, showed the aircraft's nose noticeably high before the left wing suddenly dropped and the plane fell out of sight, probably indicating a stall. [36] A spokesman said that the pilot had not reported "anything untoward" as the plane approached the airport. [23]

On 17 January, authorities began returning the victims' bodies to their families.[ citation needed ]

Nepal Airlines Corporation, formerly known as Royal Nepal Airlines, is the flag carrier of Nepal. Founded in 1958, it is the oldest airline of the country. Out of its main base at Tribhuvan International Airport, Kathmandu, the airline operates domestic services within Nepal and medium-haul services in Asia. The airline's first aircraft was a Douglas DC-3, used to serve domestic routes and a handful of destinations in India. The airline acquired its first jet aircraft, Boeing 727s, in 1972. As of 13 July 2020, the airline operates a fleet of seven aircraft. Since 2013, the airline has been on the list of air carriers banned in the European Union.

Yeti Airlines Pvt. Ltd. is an airline based in Kathmandu, Nepal. The airline was established in May 1998 and received its air operator's certificate on 17 August 1998. It is the parent company of Tara Air. As of 2021, Yeti Airlines was the second largest domestic carrier in Nepal, after Buddha Air.

Buddha Air Pvt. Ltd is an airline based in Jawalakhel, Lalitpur, Nepal, near Patan. It operates domestic as well as international services within Nepal and India, serving mainly large towns and cities in Nepal. It operates 33 routes to 14 destinations in Nepal and to Varanasi, India. Its main base is Tribhuvan International Airport, Kathmandu. It was the largest domestic carrier in terms of passengers carried in 2020.

Pokhara Airport is a domestic airport serving Pokhara in Nepal. Pokhara Airport will be gradually replaced by Nepal's third international airport, Pokhara International Airport, in 2023. While most operations were transferred to the new airport on 1 January 2023, the STOL-operations to Jomsom are still operated from this airport.

Sita Air is an airline based in Kathmandu, Nepal, operating domestic services within Nepal. The airline was established in 2003. The airline's main base is Tribhuvan International Airport with hubs at Pokhara Airport and Nepalgunj Airport. 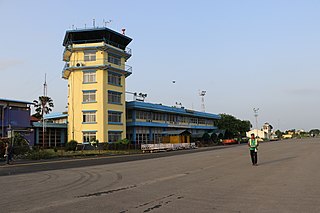 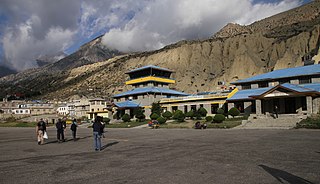 Jomsom Airport is a domestic airport located in Jomsom serving Mustang District, a district in Gandaki Province in Nepal. It serves as the gateway to Mustang District that includes Jomsom, Kagbeni, Tangbe, and Lo Manthang, and Muktinath temple, which is a popular pilgrimage for Nepalis and Indian pilgrims. 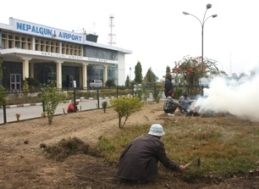 Nepalgunj Airport is a domestic airport serving Nepalgunj in Nepal. There are plans by the Civil Aviation Authority of Nepal to promote the airport to an international airport and establishing immigration, customs and quarantine facilities. 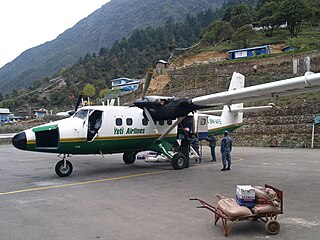 Yeti Airlines Flight 101 was a domestic flight in Nepal, that crashed on final approach to Tenzing-Hillary Airport in the town of Lukla in eastern Nepal on 8 October 2008. The De Havilland Canada DHC-6 Twin Otter Series 300 registered as 9N-AFE originated from Tribhuvan International Airport in Kathmandu.

Tara Air Pvt. Ltd. is an airline headquartered in Kathmandu, Nepal. It is a subsidiary of Yeti Airlines. Tara Air was formed in 2009 using aircraft from the Yeti Airlines fleet and is based at Tribhuvan International Airport, with a secondary hub at Nepalgunj Airport. The airline operates scheduled flights and air charter services with a fleet of STOL aircraft, previously provided by Yeti Airlines. Its operations focus on serving remote and mountainous airports and airstrips.

Lao Airlines Flight 301 was a scheduled domestic passenger flight from Vientiane to Pakse, Laos. On 16 October 2013, the ATR 72-600 aircraft operating the flight crashed into the Mekong River near Pakse, killing all 49 people on board. The accident was the first involving an ATR 72-600 and the deadliest ever to occur on Laotian soil. 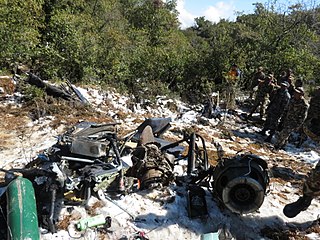 Nepal Airlines Flight 183 was a scheduled domestic passenger flight operated by a DHC-6 Twin Otter that on 16 February 2014 crashed into a hill near Dhikura, Nepal.

Summit Air, formerly known as Goma Air, is an airline based in Kathmandu, Nepal. The airline operates from short takeoff and landing airstrips in the Western parts of Nepal. The airline received the first of two Let 410 aircraft, financed by the Czech Republic Export Bank., in October 2014, and initially only used them on flights to Lukla and Jomsom.

On 21 June 2006, when approaching Jumla Airport, Nepal, a Yeti Airlines DHC-6 Twin Otter crashed into the ground after the crew decided to abort the landing and perform a go-around for an unknown reason. Eyewitnesses said that the plane appeared to have stalled while making a tight turn on the threshold of runway 27 and ploughed into the ground in a ball of fire on the eastern edge of the runway.

US-Bangla Airlines Flight 211 was a scheduled international passenger flight from Dhaka, Bangladesh, to Kathmandu, Nepal, that crashed on 12 March 2018 while landing, killing 51 of the 71 people aboard. The aircraft, a 76-seat Bombardier Q400 operated by US-Bangla Airlines, burst into flames after the crash, and the 20 surviving passengers were seriously injured from the impact and the fire. At the time of the accident, it was the deadliest aviation disaster involving a Bangladeshi airline, and the deadliest incident involving the Bombardier Dash 8 Q400.

Tara Air Flight 197 was a scheduled domestic flight operated by Tara Air for parent company Yeti Airlines from Pokhara Airport to Jomsom Airport in Nepal. On 29 May 2022, the Twin Otter aircraft carrying 22 people departed at 09:55 NPT and lost contact with air traffic controllers about 12 minutes later at 10:07 (04:22). The wreckage was located 20 hours later on a mountainside. All 22 passengers and crew were killed, and all 22 bodies were recovered. This was Tara Air's second deadly accident on this route, after Flight 193 in 2016.