General elections were held in Malawi on 17 May 1994 to elect the President and National Assembly. They were the first multi-party elections in the country since prior to independence in 1964, and the first since the restoration of multi-party democracy the previous year. The Malawi Congress Party (MCP), which had governed the country since independence (from 1966 to 1993 as the sole legal party), was decisively beaten by the United Democratic Front (UDF). Former President-for-life Hastings Banda, in power since independence, was defeated in by the UDF's Bakili Muluzi, who took 47 percent of the vote to Banda's 33 percent. [1]

At a reputed age of 96, Banda would have been the oldest elected president in world history had he won. He was one of the oldest persons running for that office in history.

The National Assembly elections were contested by eight parties, who put forward a total of 600 candidates, as well as 13 independents. The UDF won 88 seats, three short of a majority, whilst the MCP finished second with 56 seats. Results in two seats, both won by Banda's MCP, were annulled due to irregularities. [1] Voter turnout was 79.6%. [2]

Following the elections, on 25 May Muluzi formed a 25-member cabinet, including members of the Malawi National Democratic Party and the United Front for Multiparty Democracy. He left three posts unfilled in the hope that the Alliance for Democracy would also join the government. [1] 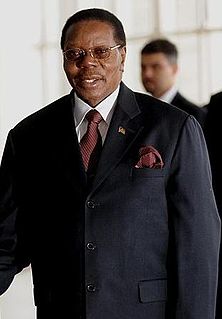 The People's Progressive Movement (PPM) is a political party in Malawi. At the elections of 20 May 2004, its candidate for president Aleke Banda won 2.5% and the party was part of the Mgwirizano Coalition, that won 27 out of 194 seats. Aleke Banda was the close friend of hastings Kamuzu Banda in 1956. He was among the people who founded the Nyasaland Congress Party. He was also saved as Ministry of Agriculture in the United Democratic Front (UDF) during Bakali Muluzi's time. He left UDF together with Mark Katsonga Phiri and formed their party after there was disagreement with Muluzi about the Presidency of Bingu wa Munthalika.

Harry Thomson, also known as "Clean Harry", was a Malawian politician. He was born in Zomba, the capital of Nyasaland. He was a founding member of the United Democratic Front party (UDF) and a Minister of Trade and Industry.

Sam Mpasu was a Malawian politician, author, and former diplomat. He served as Minister of Commerce, Secretary General of the United Democratic Front (UDF) in 1999, and speaker of the Malawi National Assembly.