The Treaty of Good-Neighborliness and Friendly Cooperation Between the People's Republic of China and the Russian Federation (FCT) is a twenty-year strategic treaty that was signed by the leaders of the two international powers, Jiang Zemin and Vladimir Putin, on July 16, 2001.

The treaty outlines the broad strokes which are to serve as a basis for peaceful relations, economic cooperation, as well as diplomatic and geopolitical reliance. Controversially, Article 9 of the treaty can be seen as an implicit defense pact, and other articles (A7 and A16) point at increasing military cooperation, including the sharing of "military know-how" (A16), namely, Chinese access to Russian military technology.

The treaty also encompasses a mutual, cooperative approach to environmental technology regulations and energy conservation; and toward international finance and trade. The document affirms Russia's stand on Taiwan as "an inalienable part of China" (A5), and highlights the commitment to ensure the "national unity and territorial integrity" in the two countries (A4). The treaty includes a no first use clause for the two nations against each other.

According to Paul Stronski and Nicole Ng of the Carnegie Endowment for International Peace, "the greatest threat to the West of the Sino-Russian partnership emanates from their efforts to adjust the international system to their advantage". [3]

Analysts have attributed the motives behind, and perceived mutual benefit of, the FCT to several factors. [4]

Economic competition with the US, Japan and the EU

The United States, Japan and the European Union are three economic powers who possess a skilled workforce and access to capital. Russia and the PRC can more effectively compete against these powers in the world economy, with Russia given access to Chinese capital and China given access to Russian training and technology. 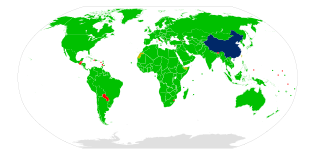 The foreign relations of the People's Republic of China (PRC), commonly known to most states as China, has full diplomatic relations with 178 out of the other 193 United Nations member states. This article guides the way in which China interacts with foreign nations and expresses its political and economic weaknesses and values. As a great power and emerging superpower, China's foreign policy and strategic thinking are highly influential. China officially claims it "unswervingly pursues an independent foreign policy of peace. The fundamental goals of this policy are to preserve China's independence, sovereignty and territorial integrity, create a favorable international environment for China's reform and opening up and modernization of construction, and to maintain world peace and propel common development." An example of a foreign policy decision guided by "sovereignty and territorial integrity" is not engaging in diplomatic relations with any country that recognizes the Republic of China (Taiwan), which the PRC does not recognise as a separate nation.

The foreign relations of the Russian Federation are the policy of the government of Russia by which it guides the interactions with other nations, their citizens and foreign organizations. This article covers the foreign policy of the Russian Federation since the dissolution of the Soviet Union in late 1991. The Kremlin's foreign policy debates show a conflict between three rival schools: Atlanticists, seeking a closer relationship with the United States and the Western World in general; Imperialists, seeking a recovery of the semi-hegemonic status lost during the previous decade; and Neo-Slavophiles, promoting the isolation of Russia within its own cultural sphere. While Atlanticism was the dominant ideology during the first years of the new Russian Federation, under Andrei Kozyrev, it came under attack for its failure to defend Russian preeminence in the former USSR. The promotion of Yevgeny Primakov to Minister of Foreign Affairs will mark the beginning of a more nationalistic approach to foreign policy. Vladimir Putin's presidency lasted from January 2000 until May 2008 and again from 2012 through the present. In international affairs, Putin made increasingly critical public statements regarding the foreign policy of the United States and other Western countries. Under Putin, Russia has engaged in several notable conflicts, including against its neighbors Ukraine and Georgia, forcing both to relinquish territory. Relations with the United States in particular have sharply deteriorated between 2001 and 2021.

The Five Principles of Peaceful Coexistence, also known as the Panchsheel Treaty: Non-interference in others internal affairs and respect for each other's territorial unity integrity and sovereignty, are a set of principles to govern relations between states.

In the late 1990s, some journalists used the expression "The New Great Game" to describe what they proposed was a renewed geopolitical interest in Central Asia based on the mineral wealth of the region which was becoming available to foreign interests after the dissolution of the Soviet Union.

A Treaty of Friendship, also known as a Friendship Treaty, is a common generic name for any treaty establishing close ties between countries. Friendship treaties have been used for agreements about use and development of resources, territorial integrity, access to harbours, trading lanes and fisheries, and promises of cooperation. Whilst not common, there are some treaties agreeing to some forms of military alliance which have use friendship terminology in their titles, as well as some non-aggression pacts. Additionally, Friendship Treaties have also signalled an independent relationship with emerging states. 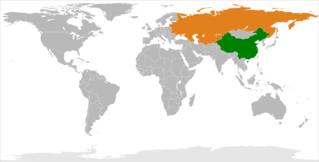 Sino-Soviet relations refers to the diplomatic relationship between the Chinese Republic and the various forms of Soviet Power which emerged from the Russian Revolution of 1917 to 1991, when the Soviet Union ceased to exist.

Brazil–Russia relations have seen a significant improvement in recent years, characterized by an increasing commercial trade and cooperation in military and technology segments. Today, Brazil shares an important alliance with Russia, with partnerships in areas such as space and military technologies as well as telecommunications.

Belarus–Russia relations refers to the bilateral relations between Belarus and Russia. The two countries share a land border and constitute the supranational Union State. Several treaties have been concluded between the two nations bilaterally. Russia is Belarus' largest and most important economic and political partner. Both are members of various international organizations, including the Commonwealth of Independent States, the Eurasian Customs Union, the Collective Security Treaty Organization and the United Nations.

The Indo–Soviet Treaty of Peace, Friendship and Cooperation was a treaty signed between India and the Soviet Union in August 1971 that specified mutual strategic cooperation. That was a significant deviation from India's previous position of non-alignment during the Cold War and was a factor in the 1971 Indo-Pakistani war.

Greece–Russia relations refers to the bilateral relationship between Greece and Russia and their predecessor states. Diplomatic relations between the Russian Empire and the Greek state were established in September 1828. Both Greece and Russia are full members of some international organizations, including the Council of Europe, the Organization for Security and Co-operation in Europe and the Organization of the Black Sea Economic Cooperation. Despite Greece being a member of NATO and the European Union, their relationship has been notably strong.

India–Russia relations are the bilateral relations between India and Russia. During the Cold War, India and the Soviet Union (USSR) had a strong strategic, military, economic and diplomatic relationship. After the Dissolution of the Soviet Union, Russia inherited its close relationship with India which resulted in both nations sharing a Special Relationship. Russia and India both term this relationship as a "special and privileged strategic partnership" . Owing to the bonhomie shared by the countries' respective leaders, Prime Minister Narendra Modi and President Vladimir Putin, the bilateral relationship has seen further growth and development. An informal meeting between them in 2018 at Sochi helped accelerate the partnership, displaying the role of interaction and cooperation between India and Russia.

Mongolia–Russia relations have been traditionally strong since the Communist era, when the Soviet Union supported Mongolian People's Republic. Mongolia and Russia remain allies in the post-communist era. Russia has an embassy in Ulaanbaatar and two consulate generals. Mongolia has an embassy in Moscow, three consulate generals, and a branch in Yekaterinburg. Both countries are full members of the Organization for Security and Co-operation in Europe.

With the collapse of the Soviet Union, that de facto US–China alliance ended, and a China–Russia rapprochement began. In 1992, the two countries declared that they were pursuing a "constructive partnership"; in 1996, they progressed toward a "strategic partnership"; and in 2001, they signed a treaty of "friendship and cooperation."

The 2012 SCO summit was the 12th annual summit of the Shanghai Cooperation Organisation.

On 31 December 1952, the Soviet Union returned full control of the Chinese Eastern Railway to the People's Republic of China. The return of the railway marked the first time that the China Eastern Railway had been under full Chinese control since the railway was constructed in 1898. The handover of the railway was the result of negotiations between the Soviet Union and the People's Republic of China culminating in the signing of the Sino-Soviet Treaty of Friendship, Alliance and Mutual Assistance. The Friendship Treaty stipulated that the Chinese Changchun Railway (CCR) be handed over to China no later than 31 December 1952. On that date, China received all of the assets of the Chinese Changchun Railway including 3,282.7 kilometers of railway lines, 10,200 railcars, 880 locomotives, power plants, heavy industries, and coal mines as well as houses, medical facilities, and schools. The transfer of this fully operable railway gave the People's Republic of China control over a politically and economically significant rail line. The Chinese Changchun Railway connected the national railway system to the important ports of Dalian, and Lüshun as well as to international border crossings with the Soviet Union and to North Korea.

In political science, triangular diplomacy is a foreign policy of the United States, developed during the Vietnam War (1955–1975) by Henry Kissinger, as a means to manage relations between contesting Communist powers, the Soviet Union and China. Connecting heavily with the correlating policy of linkage, the policy was intended to exploit the ongoing rivalry between the two Communist powers, as a means to strengthen American hegemony and diplomatic interest.