The 2011 IPC Athletics World Championships was held in Christchurch, New Zealand from January 21 to 30, 2011. Athletes with a disability competed, and the Championships was a qualifying event for the London 2012 Paralympic Games. [2]

A warm-up meet, with free entry for the audience, was held on Friday January 14. [3]

Estimates placed the total visitor spend in the city at around $12 million. [4] The championship was staged in the 20,000-seat Queen Elizabeth II Park stadium [5] that was built in 1973 for the 1974 British Commonwealth Games. Three weeks after the championship closed, the venue was damaged beyond repair in the 22 February 2011 Christchurch earthquake and has since been demolished. [6]

At least 120 journalists from 13 countries reported on the Championships. The countries included Brazil, Egypt, Finland, Switzerland, Algeria, Australia, Colombia and the United Kingdom. [7]

The internet-TV channel ParalympicSport.TV, owned by the International Paralympic Committee (IPC), in conjunction with Sky Television and Kordia, broadcast daily live coverage of the Championships. [8] ParalympicSport.TV also added clips to their YouTube channel.

The opening ceremony was held at Cathedral Square on Friday January 21 as a free event. [9] Over 1000 athletes paraded through the streets of Christchurch. At Cathedral Square, the athletes were greeted by a Pōwhiri, a Māori welcoming ceremony. The New Zealand flag was raised and the national anthem performed. The Championships were Officially opened by the Prime Minister of New Zealand, Rt Hon. John Key. [5] [10]

Where there are more than one classification in one event, (for example discus throw F54/55/56), a percentage system is used to determine who's the winner.

At the competition, 57 world records, 173 Championship records, and a number of area records and national records were broken. [17] [18]

In the 1500m T37 men, Ireland's Michael McKillop won and set a world record with a time of 4:14.81, but did not receive a medal, because only two athletes competed, and there must be a minimum of three competitors. [25]

Great Britain's David Weir and Shelly Woods, on January 29, pulled out of the marathon for safety reasons, as the roads around the circuit would not be closed to traffic. [29]

Wu Qing is a Paralympic athlete from China competing in throwing events in the F36 cerebral palsy classification. As of April 2014, Wu holds F36 World Records for shot put, discus and javelin.

Hania Aidi is a Paralympian athlete from Tunisia competing mainly in category F54 javelin throw events. Aidi has competed at four consecutive Summer Paralympics, winning silver medals at three of the Games. She is also a three time World Championships winner medalist and has held the F54 javelin world record on numerous occasions throughout her career.

Katherine Proudfoot is a cerebral palsy athlete from Australia competing mainly in throwing events. She competed in the F36 classification at the 2008, 2012 and the 2016 Summer Paralympics, winning medals at each Game. Following a medical review request in early 2017, she now competes in seated throws in the F32 classification. At the 2017 Australian Athletics Championships she threw 7.04m in the Women's Shot Put Secured event, bettering the Women's F32 shot put world record mark of 6.55m.

Ntombizanele Situ, better known as Zanele Situ, is a Paralympian athlete from South Africa competing mainly in category F54 throwing events. Specialising in the javelin throw, Situ is a two-time gold medalist at both the Paralympics and the IPC Athletics World Championships and is the first female South African black athlete to win a Paralympic gold medal.

Russell Luke Short, OAM is an Australian legally blind athlete, who has competed at eight Paralympics from 1988 to 2016 and won six gold, two silver and four bronze medals at the Games. He competes in discus, javelin, and shot put.

T44 is a disability sport classification for disability athletics, applying to "Single below knee amputation or an athlete who can walk with moderately reduced function in one or both legs." It includes ISOD A4 and A9 classes.

Bil Marinkovic is a blind Paralympic athlete from Austria who competes mostly in throwing events. 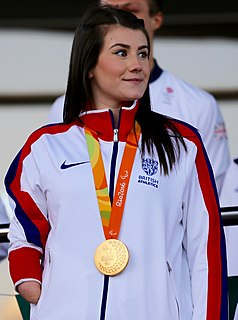 Mariia Pomazan is a Ukrainian Paralympic athlete. She competes in throwing events in the F35 classification for athletes with cerebral palsy. As of April 2014, she holds Women's F35 world records for shot put and discus.

Birgit Kober is a German Paralympic athlete. She initially competed in F34 seated throwing events, and from 2011-2013 she became the reigning champion at European, World and Paralympic level in both shot put and javelin in her class. At the 2012 Summer Paralympic Games in London, she broke the world record in both her events. Following changes to the IPC rules for seated throws in 2014, she chose to compete in a standing position as an F36 athlete. She won the F36 shot put at the 2016 Summer Paralympic Games with a Paralympic record throw. As of April 2017 she is World Record holder in the Women's F36 shot put, a distance of 11.52 m set in July 2016.

Deepa Malik is an Indian athlete. She started her career in the age of 30. She is the first Indian woman to win a medal in Paralympic Games and won a Silver medal at the 2016 Summer Paralympics in the shot put. She has also won gold in the F-53/54 Javelin event at the para athletic Grand Prix held in Dubai in 2018. She is currently the world number one in the F-53 category. She has won accolades for her participation in various adventure sports. She is associated with Himalayan Motorsports Association (H.M.A.) and Federation of Motor Sports Clubs of India (F.M.S.C.I.). She has undertaken an 8-day, 1,700-km drive in sub-zero temperatures which included a climb to 18,000 feet (5,500 m). It was – Raid De Himalaya. This journey covers many difficult paths including remote Himalayas, Leh, Shimla and Jammu.

Lahouari Bahlaz is an Algerian track and field athlete who competes in disability athletics in the F32 category. Bahlaz specializes in both the discus and club throw, winning two bronze medals at the 2012 Summer Paralympics in London.

Holly Robinson is a New Zealand para-athlete, primarily competing in the javelin throw. She represented New Zealand at the 2012 Summer Paralympics in London and the 2016 Summer Paralympics in Rio de Janeiro. At the 2016 Games, she was New Zealand's flagbearer for the opening ceremony, and won the silver medal in the women's javelin throw F46. At the 2018 Commonwealth Games she won the silver medal in the same event.