Gamba started their domestic season on 28 February 2015 with a 2-0 victory over the 2014 J.League runners-up, the Urawa Red Diamonds in Yokohama. Both Gamba's goals came in the second half and were scored by Takashi Usami and Patric. [6]

Starting from the 2015 season, it was announced that the J.League would again change back to a two-stage "mini-league" (last held in 2004). The winners of each stage and top three clubs of the aggregate table subsequently qualify for the Championship.

The following players appeared for Gamba Osaka during the 2015 J.League 1 First Stage:

The following players appeared for Gamba Osaka during the 2015 J.League 1 Second stage:

Gamba's 3rd-place finish in the overall standings for J.League 1 in 2015 saw them paired against the Urawa Red Diamonds at the semi-final stage. Due to Urawa's higher placing, the match was played at Saitama Stadium 2002, Urawa's home ground. A 3-1 win after extra-time set up a two-legged final against Sanfrecce Hiroshima.

The following players appeared for Gamba Osaka during the J.League 1 Championship Stage:

As 2014 J.League Division 1 champions, Gamba qualified for the 2015 AFC Champions League. This was their 7th appearance in the competition and their first since 2012. They were drawn into Group F along with Buriram United of Thailand, Guangzhou R&F of China and Seongnam of South Korea. [7] Gamba finished top of the group and along with Seongnam qualified for the Round of 16. As Group F winners they were paired against the runner-up of Group H who were FC Seoul. Gamba defeated Seoul 6-3 on aggregate and were paired with yet another Korean side, Jeonbuk Hyundai Motors in the quarter finals. Following a scoreless draw in the first leg in Korea, Gamba sealed a dramatic 3-2 victory at home, with defender Koki Yonekura netting the winner in the 93rd minute to ensure their progression to the semi-finals where they were paired with Chinese side Guangzhou Evergrande. A 2-1 defeat in China followed by 0-0 draw at home saw Gamba fall at the semi-final stage.

The following players appeared for Gamba Osaka during the 2015 AFC Champions League:

The Suruga Bank Championship sees the winners of the previous season's J.League Cup and Copa Sudamerica face off in a one-off match. This saw Gamba take on Argentine giants River Plate. A 3-0 defeat at Osaka Expo '70 Stadium saw Gamba finish as runners-up.

As a result of their qualification for the AFC Champions League, Gamba were given a bye into the quarter-finals of the League Cup, where they were paired against Nagoya Grampus in a two-legged encounter. After a dramatic 10-9 penalty shoot-out victory over Nagoya, in which goalkeeper Yosuke Fujigaya struck the winning penalty, Gamba were drawn against Albirex Niigata in the semi-finals. A 3-2 aggregate win over Niigata set up a final against Kashima Antlers which they lost 3-0.

The following players appeared for Gamba Osaka during the 2015 J.League Cup:

Due to their success in reaching the AFC Champions League semi-final, Gamba were given a bye to the 4th round of the Emperor's Cup where they were drawn away to fellow J-League 1 side Kawasaki Frontale. A 2-0 victory saw them progress to the quarter-finals where they were paired with another J-League 1 outfit, this time Sagan Tosu. A 3-1 win ensured they qualified for the semi-finals where they were again successful, this time beating 2015 J-League 1 Champions Sanfrecce Hiroshima 3-0 in a match played at Nagai Stadium. The final was played at Ajinomoto Stadium, Tokyo on 1 January 2016 and saw Gamba triumph 2-1 against the Urawa Red Diamonds to retain the trophy.

The following players appeared for Gamba Osaka during the 2015 Emperor's Cup: 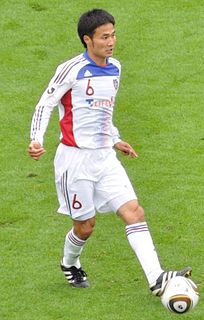 Yasuyuki Konno is a Japanese football player who plays for Júbilo Iwata. He played for Japan national team. 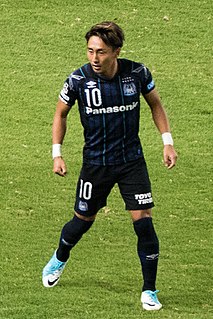 Oh Jae-suk is a South Korean football player who currently plays as full-back for FC Tokyo on loan from Gamba Osaka in the J1 League. He previously played for Suwon Samsung Bluewings and Gangwon FC in his homeland. He has also represented his country at full international level.

The 2011 Gamba Osaka season was Gamba Osaka's 19th season in the J.League Division 1 and 25th overall in the Japanese top flight. It also includes the 2011 J.League Cup, 2011 Emperor's Cup, and the 2011 AFC Champions League.

Hiroki Fujiharu is a Japanese football player. He plays as a left full-back for Gamba Osaka in J1 League.

The 2016 Gamba Osaka season was Gamba Osaka's 23rd season in the J1 League and 29th overall in the Japanese top flight. Like the previous season, the 2016 campaign was split into two stages, with the first stage running from February to June, the second stage being held between July and November and finally a Championship stage in late November. With city-rivals Cerezo Osaka failing to gain promotion from J2, Gamba's main rivalry match was the Hanshin derby against Vissel Kobe with an away game held in round 4 on the 19th March and the return home match in round 26 on August 20. Gamba finished in 6th place in the first stage of the season and 4th place in the second stage for an overall 4th-place finish.

The 2014 Gamba Osaka season was Gamba Osaka's 21st season in the J.League Division 1 and 27th overall in the Japanese top flight. It also included the 2014 J.League Cup and 2014 Emperor's Cup. The season was one of unparalleled success as it saw them win the treble with an incredible comeback in the second half of the league season which saw them crowned J.League champions following a 0-0 draw away to Tokushima Vortis in December. In addition they added both the J.League Cup and the Emperor's Cup to their trophy cabinet. The feat was made all the more incredible by the fact that Gamba were only promoted back to J.League 1 at the beginning of 2014 following a one-season spell in the Japanese second division.

The 2015 FC Tokyo season is FC Tokyo's 15th season in the J. League Division 1. It was Massimo Ficcadenti's second season as manager.

The 2017 Gamba Osaka season was Gamba Osaka's 24th season in the J1 League and 30th overall in the Japanese top flight. It saw them compete in the 18 team J1 League which had reverted to a single stage format of 34 games where each team played the other 17 participants home and away after an unsuccessful trial of a first stage and second stage being followed by a championship playoff series. City rivals, Cerezo Osaka were promoted from J2 at the end of 2016 meaning that the two sides played derby matches for the first time since 2014 and with neighbouring Vissel Kobe also participating in J1, Gamba had 4 league derbies to look forward to throughout the season.

The 2018 Gamba Osaka season was Gamba Osaka's 25th season in the J1 League and 31st overall in the Japanese top flight. It saw them compete in the 18 team J1 League as well as the J.League Cup and Emperor's Cup competitions.