Parliamentary elections were held in Slovakia on 29 February 2020. All 150 members of the National Council were elected and the leader of the resultant government party or coalition will become the Prime Minister.

The ruling coalition comprising Direction – Social Democracy (Smer–SD), the Slovak National Party and Most–Híd led by Prime Minister Peter Pellegrini of Smer–SD was defeated by the anti-corruption party Ordinary People led by Igor Matovič. However, as no single party or electoral coalition attained an absolute majority of seats, a post-election coalition was required to form a government. [1] [2] [3] [4] It was the first time since the 2006 election that Smer–SD did not emerge as the party with the most seats in the National Council. On 13 March, Matovič announced he had reached an agreement for a governing coalition with We Are Family, Freedom and Solidarity and For the People, though they had not agreed upon a common governing program.

Smer–SD won a plurality of seats in the 2016 election and formed a coalition government with nationalist Slovak National Party, inter-ethnic Most-Híd and centre-right Network. Incumbent prime minister Robert Fico remained in office [5] until 2018 when Peter Pellegrini took over.

The 150 members of the National Council will be elected by proportional representation in a single nationwide constituency with an electoral threshold of 5% for single parties, and 7% for coalition groupings with at least two parties. The elections use the open list system, with seats allocated using the Hagenbach-Bischoff system. Voters will be able to cast up to four preferential votes for candidates on the list of the party they voted for. [7]

All participating parties must register 90 days before election day and pay a deposit of €17,000, which will be refunded to all parties gaining 3% or more of the vote. All Slovak citizens are allowed to vote except for convicted felons in prison (only those who were convicted for serious offences), people declared ineligible to perform legal acts by court and citizens under 18 years of age. All citizens, who are 21 years of age or older and are permanent residents of Slovakia, are allowed to run as candidates except for prisoners, convicted felons and those declared ineligible to perform legal acts by court. [8]

Voters not present in their electoral district at the time of the elections are allowed to request a voting certificate (voličský preukaz), which allows them to vote in any district regardless of their residency. [9] Voters abroad on election day are allowed to request a postal vote. [10] According to the Central Election Committee approx. 20,000 Slovak citizens abroad have requested a postal vote during the last election. The deadline for requests passed on 10 January 2020.

The Christian Democratic Movement (KDH) and Party of the Hungarian Community (SMK-MKP) were two parties which couldn't pass the 5 percent threshold to the parliament in 2016 but further gained more than 4% (KDH got 4,9 percent, while SMK-MKP got 4,1 percent). KDH lost all of its 16 seats while SMK-MKP haven't gained any. Leader of the KDH, Ján Figeľ, announced his resignation few days after 2016 election. He was then replaced by Alojz Hlina on 11 June 2016. [11] Leadership of the SMK-MKP, which was led by József Berényi, was taken over by József Menyhárt on 11 June 2016. [12]

On 12 August 2016, incumbent leader of coalition party Network (SIEŤ), Radoslav Procházka, announced that he had no further intention to lead his party after a disastrous result in the election. A day later on 13 August at the party convention, it was decided that the new leader of the party would be Roman Brecely, his fellow party member and incumbent minister of transportation. He was the only candidate to stand up for the post although he didn't intend to run for the office. [13]

On 15 March 2018, Robert Fico announced his resignation as Prime Minister of Slovakia which the President Andrej Kiska accepted. Peter Pellegrini, currently Deputy Prime Minister for Investment & Informatization, has become the new Prime Minister of the Slovak Republic. Fico has remained the leader of Smer–SD, and kept his parliamentary mandate. Pellegrini's cabinet was appointed on 22 March 2018.

The ruling coalition comprising Direction – Social Democracy (Smer–SD), the Slovak National Party and Most–Híd led by Prime Minister Peter Pellegrini of Smer–SD was defeated by the anti-corruption party Ordinary People led by Igor Matovič. However, as no single party or electoral coalition attained an absolute majority of seats, a post-election coalition will be required to form a government. [14] [15] [16] [17] It is likely to consist of at least the three centre-right and moderate conservative parties: Ordinary People, Freedom and Solidarity and For the People - which would together hold a total of 78 seats, but may also include the right-wing We Are Family party - which would expand the potential coalition's support to a constitutional majority total of 95 seats. [18] This election was also the first time since the 2006 election that Smer–SD did not emerge as the party with the most seats in the National Council. The coalition of Progressive Slovakia and SPOLU failed to meet the 7% threshold for coalitions to enter parliament by only 926 votes, surprising analysts, as they had been several percentage points above the threshold required in opinion polls as recently as a few days before the election, and polled above the threshold in exit polls taken on election day. The coalition submitted an electoral complaint with the Constitutional Court on 12 March seeking a recount, although they did not have any expectation it would significantly change the results, and only did so in order to clear doubts about the democratic process. [19]

On 4 March, Matovič was tasked by president Čaputová to form a new government. [20] On 13 March, Matovič announced he had reached an agreement for a governing coalition with We Are Family, Freedom and Solidarity and For the People, though they had not agreed upon a common governing program. He has not disclosed his picks for the new cabinet, which are due to President Caputova on 14 March, but said that OĽaNO would retain the finance ministry and Richard Sulík, the leader of Freedom and Solidarity, would be economy minister. [21]

Direction – Social Democracy is a social-democratic and left-wing populist political party in Slovakia. It is led by former Prime Minister of Slovakia Robert Fico. Smer-SD was the largest party in the National Council following the parliamentary election held on 5 March 2016, but has since dropped to being the 2nd-largest party after the parliamentary election held on 29 February 2020. 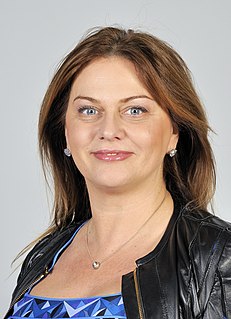 Monika Beňová is a Slovak politician who has been a member of the European Parliament since 2004. She is a member of the centre-left Direction-Social Democracy party, which in turn is affiliated with the Party of European Socialists. She presently serves on the Committee on Employment and Social Affairs.

The Slovak National Party is a nationalist political party in Slovakia. The party characterizes itself as a nationalist party based on both social and the European Christian values. 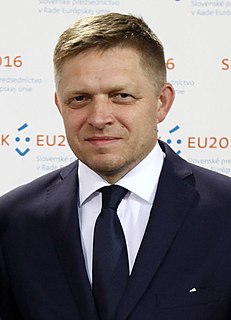 Robert Fico is a Slovak politician who served as Prime Minister of Slovakia from 2012 until his resignation in 2018. Fico also previously served as a Prime Minister from 4 July 2006 to 8 July 2010. He has been the leader of the Direction – Social Democracy (SMER-SD) party since 1999. First elected to Parliament in 1992, he was later appointed to the Council of Europe. Following his party's victory in the 2006 parliamentary election, he formed the first Fico Cabinet.

Parliamentary elections were held in Slovakia on 17 June 2006. Direction – Social Democracy emerged as the largest party in the National Council, winning 50 of the 150 seats. Its leader Robert Fico was appointed Prime Minister on 4 July 2006, leading a three-party centre-left populist coalition.

Iveta Radičová served as the first woman Prime Minister of Slovakia from 2010 to 2012. She led a coalition government, in which she also briefly held the post of Minister of Defence in the last five months of the coalition. Previously she had served as Minister of Labour from 2005 to 2006 in the second Dzurinda government.

Freedom and Solidarity is a liberal, libertarian, and Eurosceptic political party in Slovakia. The party was established in 2009 and is led by its founder, the economist Richard Sulík, who designed Slovakia's flat tax system. In the 2012 parliamentary election, the SaS lost half of its 22 seats in the National Council. The party held four positions in the government of Slovakia before the election.

Most–Híd is an inter-ethnic political party in Slovakia. Its programme calls for greater cooperation between the country's Hungarian minority and ethnic Slovak majority. It was one of four parties in the government coalition, but lost all its seats in the National Council in the 2020 Slovak parliamentary election.

A parliamentary election took place in Slovakia on 12 June 2010. The elections were contested by eighteen parties, six of which passed the 5% threshold for sitting in parliament. Despite the incumbent Smer of Prime Minister Robert Fico winning a plurality, the new government consisted of a coalition led by the Slovak Democratic and Christian Union – Democratic Party's Iveta Radičová and included KDH, SaS and Most-Hid. However, her government fell on 11 October 2011 following a vote of no confidence with a new election called for 10 March 2012.

Igor Matovič is a Slovak politician serving as the current Prime Minister of Slovakia. Born in Trnava, he studied at Comenius University and went into the publishing business.

Parliamentary elections were held in Slovakia on 10 March 2012 to elect the 150 members of the National Council. The elections followed the fall of Prime Minister Iveta Radičová's Slovak Democratic and Christian Union – Democratic Party-led coalition in October 2011 over a no confidence vote her government had lost because of its support for the European Financial Stability Fund. Amidst a major corruption scandal involving local center-right politicians, former Prime Minister Robert Fico's Direction – Social Democracy won an absolute majority of seats.

The following lists events that will happen during 2015 in Slovakia. 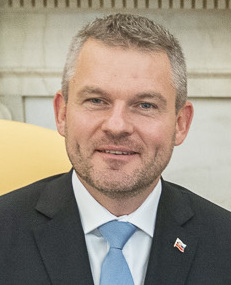 Parliamentary elections were held in Slovakia on 5 March 2016 to elect the 150 members of the National Council. The ruling left-wing populist Direction – Social Democracy (SMER–SD) party remained the strongest party, but lost its majority. The Slovak Democratic and Christian Union – Democratic Party (SDKÚ-DS) which led the government between 2000–06 and 2010–12 was defeated heavily, failing to cross the electoral threshold and losing its representation in the National Council. The centre-right Christian Democratic Movement (KDH) also failed to cross the threshold for the first time since 1990, whilst the far-right nationalist Kotleba – People's Party Our Slovakia (ĽSNS) entered parliament for the first time.

The Slovak Conservative Party, formerly known as Network, is a centre-right political party in Slovakia. It was established by Radoslav Procházka, a former member of Christian Democratic Movement (KDH).

In the run up to the 2020 Slovak parliamentary election, various organisations carry out opinion polling to gauge voting intention in Slovakia. Results of such polls are displayed in this article. 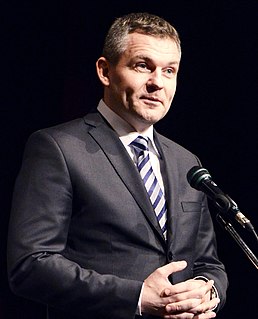 Pellegrini's Cabinet is the former government of Slovakia, headed by prime minister Peter Pellegrini. It was formed on 22 March 2018, after the Prime Minister Robert Fico resigned, as a result of the popular protests following the murder of Ján Kuciak and his fiancée, Martina Kušnírová. According to the Slovak Constitution, if the Prime Minister resigns, the entire government resigns as well. Nevertheless, the composition of the government was to a large extent the same as the previous government. All members of the Smer-SD, SNS and Most-Híd parties supported the re-constructed government.