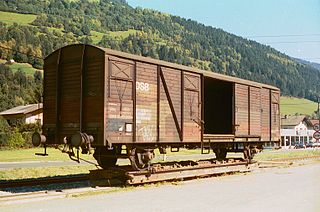 HOn30 gauge is the modelling of narrow-gauge railways in HO on N gauge track in 1:87 scale ratio. 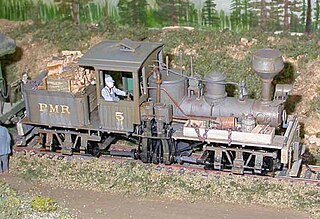 Martin's Light Railways (MLR) consisted of seven narrow-gauge railway lines in the states of West Bengal, Bihar and Uttar Pradesh in India. The railways were built and owned by Martin & Co., which was a British company.

Gaekwar's Baroda State Railway (GBSR) was a narrow gauge railway line owned by the Princely State of Baroda, which was ruled by the Gaekwar dynasty.

Bosnian-gauge railways are railways with track gauge of 760 mm. These were found extensively in the former Austro-Hungarian Empire as a standardised form of narrow gauge. The name is also used for lines of the same gauge outside Bosnia, for example in Austria. Similar track gauges are the 2 ft 6 in and 750 mm gauge.

Satpura Railway was a 2 ft 6 in narrow-gauge railway in the states of Madhya Pradesh and Maharashtra in central India. 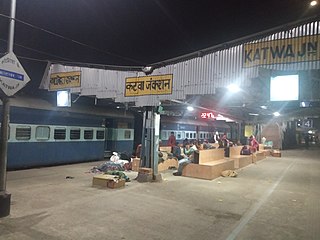 Katwa is a Kolkata Suburban Railway Junction Station on the Bandel–Katwa line and the Barharwa–Azimganj–Katwa loop. It is located in Purba Bardhaman District in the Indian state of West Bengal. It serves Katwa and the surrounding areas.

The Pune–Miraj–Londa line is a railway line connecting Pune in Maharashtra and Londa in Karnataka. It covers a distance of 468 kilometres (291 mi) across Maharashtra and Karnataka. Of the total 468 km distance of this line, 280 km stretch falls under the jurisdiction of Central Railways and the remaining 188 km section under South Western Railway.

McLeod's Light Railways (MLR) consisted of following four 2 ft 6 in narrow-gauge lines in West Bengal in India. The railways were built and owned by McLeod & Company, which was the subsidiary of a London company of managing agents, McLeod Russell & Co. Ltd. On 1 July 1967, the Bankura Damodar Railway was merged with South Eastern Railway.

The Bardhaman – Katwa Electrified Line is a 5 ft 6 in broad gauge branch line connecting Bardhaman and Katwa in Purba Bardhaman district of West Bengal. It is under the jurisdiction of Eastern Railway. The line was a narrow gauge line, before its gauge conversion began on 2010. The gauge conversion was done in two phases along with electrification and the full broad gauge line was thrown open for public again on 12 January 2018.