Transport in Saint Kitts and Nevis

Basseterre is the hub for all major roads on the island of St. Kitts. Charlestown is the equivalent hub for Nevis. Driving is on the left.

The public buses are privately owned, but government-licensed, vans. They sometimes have a decorative name on the front, and they all have a green license plate where the number starts with the letter "H" or "HA".

Destinations off of the main route are often possible on request, at the discretion of the driver, on payment of a small extra charge.

There are 5 main bus routes on St. Kitts:

(No public buses travel southwards to the main resort areas in Frigate Bay and the Southeast Peninsula of St. Kitts.)

On Nevis, buses run both ways along the main ring-road around the island. All buses start off, and eventually finish up, in the capital of Nevis, Charlestown. Buses that will be traveling north out of Charlestown wait to leave from the southwest end of D. R. Walwyn Plaza. Buses traveling south from Charlestown wait to leave from the northern end of Memorial Square. At the termination points you can board a bus and wait for it to fill up before it leaves. If you are not sure you are climbing into the right bus, ask the driver if he goes to your destination.

Taxis are privately owned, but government licensed, vans. These vans usually have a name, and they all have yellow license plates where the number starts with the letter "T" or "TA".

The main taxi stand on St. Kitts is in Basseterre, on The Circus, phone number 466 6999, and there is a taxi stand at the airport too.

The main taxi stand on Nevis is in Charlestown, on the west side of D.R. Walwyn Plaza, and there is also a taxi stand at the airport.

A taxi can traverse any accessible area on the islands, including even dirt roads and trails, if the driver agrees. It is a good idea to agree on a price in advance, and be clear about which currency the price is quoted in ($ EC or $ US.)

Basseterre is the location of all official harboring services on Saint Kitts, though Coast Guard stations exist at Sandy Point Town and Dieppe Bay Town. The Deep Water Harbour at Basseterre is capable of both hosting and berthing of cruise ships or the handling of cargos. It is located to the extreme East of Basseterre Bay.

Port Zante, in the center of Basseterre Bay, is for use of docking cruise ships only. The Port can accommodate the largest cruise ships in the world. It also has a marina facility.

The bay is also home to the popular ferry connection between Basseterre, St. Kitts and Charlestown, Nevis. There are several trips daily. On rare occasions there is a special ferry day trip from Basseterre to Oranjestad, St Eustatius and back again.

A relatively new (started in 2007) car ferry, which can take up to 35 cars and also takes pedestrian passengers, is called the "Sea Bridge" ferry, and is in operation between the two islands. This ferry traverses the narrow, 2-mile wide straight named 'The Narrows' between the two islands in 25 minutes, from Major's Bay in St. Kitts (at the tip of the southeastern peninsula), to Cades Bay in Nevis. Cars can also be carried by the "Sea Hustler" ferry, which operates out of Basseterre.

Charlestown is the harbor for the government ferries which run between Charlestown and Basseterre on St. Kitts . There is a deep water port on the southern coast of Nevis for cargo ships.

The "Sea Bridge" ferry, which takes cars (and also pedestrians), docks in the northwest part of Nevis at Cades Bay, and runs between there and Majors Bay on St. Kitts. The Sea Bridge ferry runs six times a day in each direction . For pedestrians it is worth noting that there are no facilities of any kind at Majors Bay (no houses, no businesses, etc.), only a small wooden gazebo as shelter from sun or rain, and so, if you have not already arranged to be met at Majors Bay by car or taxi, you will have to enjoy Majors Bay for a couple of hours in its more or less wild state before taking the ferry back to Nevis.

The Robert L. Bradshaw International Airport (IATA airport code SKB/TKPK) serves the city of Basseterre, and by extension the island of Saint Kitts. The airport is located in the south of the parish of Saint Peter Basseterre on the north-eastern periphery of the city of Basseterre. The 8001-foot runway airport has direct flights to London, New York and Miami, and seasonal flights to Charlotte, NC, and Philadelphia, PA, in addition to other major cities in the US and Canada during the tourist season.

The Vance W. Amory International Airport (IATA airport code NEV/TKPN) serves the island of Nevis. The airport runway is 4002 feet in length. Many flights connect from here to other Caribbean islands, including Puerto Rico.

St. Kitts has 58 km of 2 ft 6 in (762 mm) narrow gauge railway, which centers in the capital, Basseterre, and circles the island. The railway line was originally built between 1912 and 1926 to transport sugar cane to the central sugar factory in Basseterre. The last load of sugar cane was delivered to the now-defunct factory in 2005, but since 2003 the railway has offered a circle tour of the island aboard specially designed open-air, double-decker coaches primarily for tourists. [2] The St. Kitts Scenic Railway train currently runs from Sandy Point to Basseterre, traveling east. 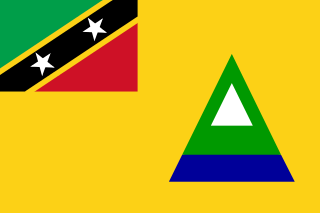 Saint Kitts and Nevis, officially known as the Federation of Saint Christopher and Nevis, is an island country in the West Indies. Located in the Leeward Islands chain of the Lesser Antilles, it is the smallest sovereign state in the Western Hemisphere, in both area and population. The country is a Commonwealth realm, with Elizabeth II as Queen and head of state. It is the only federation in the Caribbean. 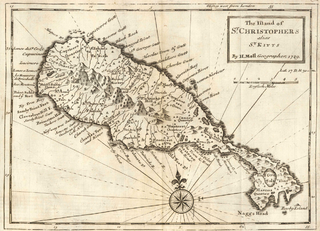 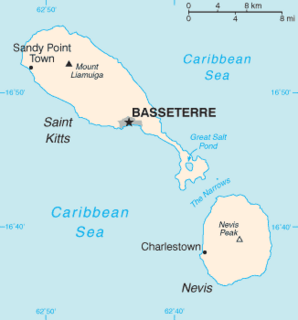 The economy of Saint Kitts and Nevis has traditionally depended on the growing and processing of sugar cane; decreasing world prices have hurt the industry in recent years. Tourism, export-oriented manufacturing, and offshore banking activity have assumed larger roles in Saint Kitts and Nevis. Most food is imported. The government has undertaken a program designed to revitalize the faltering sugar sector. It is also working to improve revenue collection in order to better fund social programs. In 1997, some leaders in Nevis were urging separation from Saint Kitts on the basis that Nevis was paying far more in taxes than it was receiving in government services, but the vote on cessation failed in August 1998. In late September 1998, Hurricane Georges caused approximately $445 million in damages and limited GDP growth for the year. 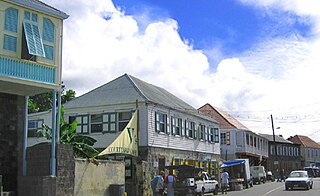 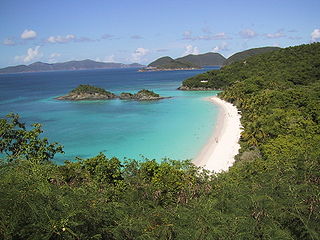 Carib Aviation was an airline based in Antigua and Barbuda.

Robert L. Bradshaw Airport, formerly known as Golden Rock Airport, is an international airport located just northeast of Basseterre, on the island of Saint Kitts, serving the nation of Saint Kitts and Nevis. It was named after the first Premier of St. Kitts-Nevis-Anguilla, Robert Llewellyn Bradshaw. In 2008, the airport handled 399,706 passengers.

Saint John Capisterre is one of 14 administrative parishes that make up Saint Kitts and Nevis. It is the second largest parish on Saint Kitts, and the third largest parish in the federation. The capital of the parish is Dieppe Bay Town.

Saint Mary Cayon is one of 14 administrative parishes that make up Saint Kitts and Nevis. It is located on the main island of Saint Kitts and the parish capital is Cayon.

Saint Paul Charlestown is one of 14 administrative parishes that make up Saint Kitts and Nevis. It is located on the island of Nevis, and the parish capital is Charlestown, which is also capital of the entire island.

Most narrow-gauge railways in North America were constructed with 3 ft track gauge. 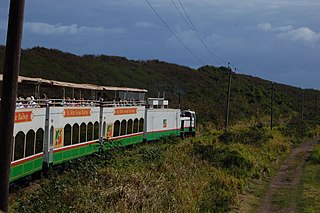 St. Kitts Scenic Railway is an 29 kilometres (18 mi) long narrow gauge railway line along the coastline of the island of St. Kitts in the eastern Caribbean, with a track gauge of 762 mm.

The St. Theresa Church and alternatively St. Theresa Parish, is a religious building of the Catholic church that is located in Main Road in the town of Charlestown, capital of Nevis Island and Saint Paul Charlestown Parish one of the 14 in the Caribbean and island federation of St. Kitts and Nevis in the Lesser Antilles.