Andrew Michael Holness, ON, MP (born 22 July 1972) is a Jamaican politician who has been the Prime Minister of Jamaica since 3 March 2016, following the 2016 Jamaican general election. [1] Holness previously served as prime minister from October 2011 to 5 January 2012. He succeeded Bruce Golding as prime minister, and decided to go to the polls in the 29 December 2011 general election in an attempt to get his own mandate from the Jamaican electorate. He failed in that bid, however, losing to the People's National Party led by Portia Simpson-Miller, with the PNP gaining 42 seats to the Jamaica Labour Party's 21. Following that defeat, Holness served as Leader of the Opposition from January 2012 to March 2016, when he once again assumed the position of prime minister. [2] In 2020, The Labour Party won a landslide in another general election, and on 7 September Holness was sworn in for another term as prime minister. [3]

Andrew Holness is a graduate of St. Catherine High School and of the University of the West Indies, where he pursued a Bachelor of Science in Management Studies and a Master of Science in Development Studies. [5] In 1997 he married Juliet Holness (née Landell), an accountant, whom he had met as a student at St. Catherine High School during the 1980s. [6] [7] The couple have two children, Adam and Matthew. [8]

Holness served as Executive Director at the Voluntary Organization for Uplifting Children from 1994 to 1996 and then joined the Premium Group of Companies, acting as a special assistant to Edward Seaga.

He is a member of the Seventh-day Adventist Church. [9]

In 1997 he became Member of Parliament for West Central St. Andrew and served as Opposition Spokesperson on Land and Development from 1999 to 2002. In 2002 he switched portfolio to Housing and then Education in 2005. He was sworn in as Minister of Education in September 2007.

He succeeded Bruce Golding as both leader of the Jamaica Labour Party and prime minister on 23 October 2011, making him the ninth person to hold this office. As prime minister, he chose to retain the education portfolio.

On 5 December 2011, Mr Holness called the next election for 29 December 2011. The JLP campaigned in their strongholds and Holness highlighted the four years of JLP government with accomplishments, such as economic growth and crime reduction which the JLP says the PNP failed to do during their eighteen years rule of the country. The JLP, however, lost at the polls to the People's National Party, which gained a large majority of 42 to the JLP's 21 parliamentary seats.

2016 elections and re-appointment as Prime Minister

On 25 February 2016, the Jamaica Labour Party, led by Andrew Holness, won the general election with the JLP winning 32 seats compared to 31 seats for the incumbent People's National Party. His wife Juliet also won a seat in parliament, the first time a prime minister or opposition leader and their spouse sat in the Parliament of Jamaica together. [10]

The People's National Party (PNP) is a social-democratic political party in Jamaica, founded in 1938 by activist Osmond Theodore Fairclough. It holds 14 of the 63 seats in the House of Representatives, as 96 of the 227 local government divisions. The party is democratic socialist by constitution.

The prime minister of Jamaica is Jamaica's head of government, currently Andrew Holness. Holness, as leader of the governing Jamaica Labour Party (JLP), was sworn in as Prime Minister on 7 September 2020, having been re-elected as a result of the JLP's landslide victory in the 2020 Jamaican general election. 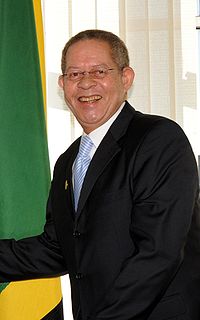 Orette Bruce Golding is a former Jamaican politician who served as eighth Prime Minister of Jamaica from 11 September 2007 to 23 October 2011. He is a member of the Jamaica Labour Party (JLP), which he led from 2005 to his resignation in 2011.

Pearnel Charles is a Jamaican politician with the Jamaica Labour Party who is the current Speaker of the House of Representatives.

Daryl Wesley Phillip Vaz is a Jamaican politician who is the Labour MP for Portland Western. He was the Minister of Information and Telecommunications in Jamaica from March 2009 to January 2016. His party lost the election in 2011 and Vaz served as opposition spokesman on Telecommunications. Vaz is currently Minister without Portfolio in the Ministry of Economic Growth and Job Creation, with responsibility for land, environment, climate change and investments, since the Jamaica Labour Party returned to government in March 2016. He also serves as Member of Parliament for the constituency of Portland Parish Western Division.

Kenneth Wykeham McNeill, MD, MP, CD is a Jamaican politician, former Member of Parliament for Westmoreland West, Jamaica. He is a former government minister. He was the Minister of Tourism of Jamaica from 2012-2016. He was elected the first vice chair of the Executive Council of the United Nations World Tourism Organization representing Jamaica in 2012 and elected chairman of the Executive council for the 2014-2015 period. McNeill was elected a Vice President of The People's National Party at the Party's annual conference in September 2016.

Template:Use JamaicanEnglish Robert Montague is a Jamaican politician with the Jamaica Labour Party. He comes from a political family; his father Asquith Nathaniel was a charter member of the JLP. He entered politics in 1990 as a councillor for Carron Hall, Saint Mary Parish. He later became the mayor of Port Maria. In 2012, Opposition Leader Andrew Holness named him a member of the Senate of Jamaica. He is now the Minister of Transport And Mining in the Andrew Holness-led government after winning the 2016 Jamaican general election.

Peter PhillipsMP is a Jamaican politician who is the former president of the People's National Party and former leader of the Opposition in Jamaica. He served as Minister of Finance and Planning of Jamaica from 2012 to 2016. He is Member of Parliament for East Central St Andrew. 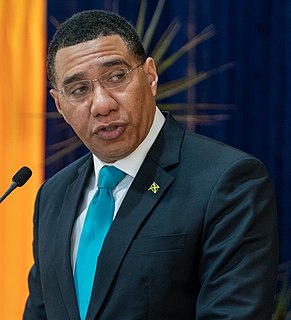 A by-election to the House of Representatives was held for the Saint Andrew North Western constituency on March 5, 2018. The seat was declared vacant after the resignation of Derrick Smith as member of Parliament effective January 15, 2018. The election was won by Nigel Clarke of the Jamaica Labour Party.

Trelawny Northern is a parliamentary constituency represented in the House of Representatives of the Jamaican Parliament. It elects one Member of Parliament (MP) by the first past the post system of election. It was one of the 32 constituencies fixed in the new constitution granted to Jamaica in 1944. The constituency has featured in all 16 contested Parliamentary General Elections from 1944 to 2016. The current MP is Tova Hamilton, representing the Jamaica Labour Party, who has been in office since the 2020 general election.