The Jamaica Labour Party (JLP) is one of the two major political parties in Jamaica, the other being the People's National Party (PNP). While its name might suggest that it is a social democratic party (as is the case for "Labour" parties in several other Commonwealth realms such as Australia, New Zealand and the United Kingdom), the JLP is actually a conservative party. [10] [11] [12] However, it has longstanding ties to the Jamaican labour movement.

It is the current governing party, having won 48 of the 63 parliamentary seats in the lower house of parliament (House of Representatives) in the 2020 general elections.

The JLP uses the Liberty Bell, the victory sign, and the colour green as electoral symbols. The JLP is a member of the Caribbean Democrat Union.

The party was founded on 8 July 1943 by Alexander Bustamante as the political wing of the Bustamante Industrial Trade Union. Bustamante had previously been a member of the PNP.

The JLP lost power to the PNP in the 1955 elections. The PNP won for the first time, securing 18 out of 32 seats. The JLP ended up with 14 seats, and there were no independents. The voter turnout with 65.1%. As a result, Norman Manley became the new chief minister. [14]

The JLP remained in opposition following the 1959 elections, when the number of seats was increased to 45. The PNP secured a wider margin of victory, taking 29 seats to the JLP's 16.

The JLP was victorious in 1962 and was therefore the Government when Jamaica gained its political independence from Great Britain on 6 August 1962.

Bustamante suffered a stroke in 1964 and largely withdrew from politics. However, he did not relinquish the title of party leader for another decade. Donald Sangster took over as acting prime minister after Bustamante's stroke. He was named First Deputy Leader in 1967, and led the party to victory as of the 21 February 1967 elections. Sangster suffered a brain hemorrhage and died about six weeks after the elections, while he was preparing for his budget presentation.

Hugh Shearer succeeded Sangster as First Deputy Leader and Prime Minister, defeating David Clement (DC) Tavares by two votes in a run-off by of the JLP parliamentarians. Tavares had come out on top in the first ballot, with Shearer and Robert Lightbourne being the other candidates. Under Shearer, the JLP lost power for the first time to the People's National Party and Michael Manley in 1972. Shearer served as Opposition Leader until 1974.

Bustamante finally gave up the post of party leader in 1974, and Edward Seaga was elected his successor. The party lost the 1976 elections, but Seaga became Prime Minister after victory in 1980 when the party won by a landslide, capturing 51 of the then 60 parliamentary seats. In 1983 with the JLP achieving a spike in popularity, in part because of Seaga's support of the US-led military invasion of Grenada, Seaga called early elections and won all sixty seats, the majority by acclamation, mainly because the opposition PNP boycotted those elections. The JLP suffered defeat in the 1989 elections and went on to lose elections in 1993, 1997 and 2002, all under the continued leadership of Seaga.

In 2005 Bruce Golding succeeded Seaga as leader of the party, and led it to victory in the 2007 elections. Golding resigned as head of the party and Prime Minister in October 2011 and was succeeded by Andrew Holness. Soon after becoming leader, Holness called an election over a year before it was constitutionally due, and the party lost by a 2:1 margin to the PNP. Holness was not blamed for the defeat, and continued to lead the party as Opposition Leader

The party held a leadership election on 10 November 2013 where Holness was challenged by his deputy, Shadow Minister for Finance Audley Shaw. Holness defeated Shaw by a margin of 2,704 votes to Shaw's 2,012. [16]

Holness went on to lead the JLP to a one-seat parliamentary majority (32–31) in the 2016 general election, reducing the PNP to the opposition benches after one term. In the 2020 general election, Andrew Holness made history for the JLP by accomplishing a second consecutive win for the Jamaica Labour Party. The last time a consecutive win occurred for the JLP was in 1980. [17] This is what Jamaicans classified as a "landslide victory". [18] [19] [20] [21]

The JLP is a conservative party. It believes in a market-driven economy and individual personal responsibility.

In May 2008, in an interview with Stephen Sackur of the BBC, Bruce Golding PM and Party Leader declared that any cabinet formed by him would exclude any MP known to be gay. [22] In previous statements, Golding stated that he and his party strongly opposed public displays of homosexuality in Jamaica and that he felt that they should continue to be illegal in keeping with Jamaican societal norms. [23] He justified the illegality of homosexual acts by referring to Christian values and the integrity of the family. [24] [25]

1. ^ Donald Sangster and Hugh Shearer were not actually leaders of the JLP but were de facto leaders during Bustamante's illness/withdrawal from active political life.

The Caribbean island of Jamaica was inhabited by the Arawak tribes prior to the arrival of Columbus in 1494. Early inhabitants of Jamaica named the land "Xaymaca", meaning "land of wood and water". The Spanish enslaved the Arawak, who were ravaged by the enslavement from the Europeans and the foreign diseases that the Spanish brought with them. By 1600, the Arawak tribes were extinct. The Spanish also transported hundreds of West African people to the island.

Michael Norman Manley ON OCC was a Jamaican politician who served as the fourth Prime Minister of Jamaica from 1972 to 1980 and from 1989 to 1992. Manley championed a democratic socialist program, and has been described as a populist. According to opinion polls, he remains one of Jamaica's most popular prime ministers.

The People's National Party (PNP) is a social-democratic political party in Jamaica, founded in 1938 by activist Osmond Theodore Fairclough. It holds 15 of the 63 seats in the House of Representatives, as 96 of the 227 local government divisions. The party is democratic socialist by constitution.

The prime minister of Jamaica is Jamaica's head of government, currently Andrew Holness. Holness, as leader of the governing Jamaica Labour Party (JLP), was sworn in as Prime Minister on 7 September 2020, having been re-elected as a result of the JLP's landslide victory in the 2020 Jamaican general election.

Sir William Alexander Clarke Bustamante was a Jamaican politician and labour leader, who, in 1962 became the first prime minister of Jamaica. He founded the Bustamante Industrial Trade Union following the 1938 labour riots, and the Jamaican Labour Party in 1943. Bustamante is honoured in Jamaica with the title National Hero of Jamaica in recognition of his achievements. 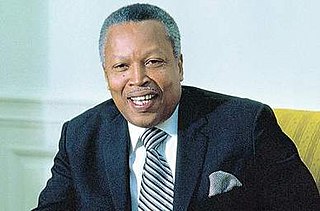 Hugh Lawson Shearer ON OJ PC was a Jamaican trade unionist and politician, who served as the 3rd Prime Minister of Jamaica, from 1967 to 1972. 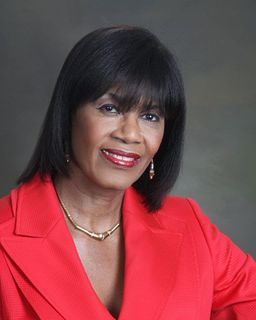 General elections were held in Jamaica on 30 October 1980. The balance of power in the 60-seat Jamaican House of Representatives was dramatically-shifted. Prior to the vote, the People's National Party (PNP), led by Prime Minister Michael Manley, had a 47 to 13 majority over the Jamaica Labour Party (JLP), led by Edward Seaga. With the loss by 38 PNP incumbents to their JLP challengers, Seaga's party captured a 51 to 9 majority and Seaga replaced Manley as Prime Minister of Jamaica. Voter turnout was 86.9%.

General elections were held in Jamaica on 9 February 1989. The result was a victory for the People's National Party, which won 45 of the 60 seats. Voter turnout was 78.4%.

Andrew Michael Holness, ON, MP is a Jamaican politician who has been the Prime Minister of Jamaica since 3 March 2016, following the 2016 Jamaican general election. Holness previously served as prime minister from October 2011 to 5 January 2012. He succeeded Bruce Golding as prime minister, and decided to go to the polls in the 29 December 2011 general election in an attempt to get his own mandate from the Jamaican electorate. He failed in that bid, however, losing to the People's National Party led by Portia Simpson-Miller, with the PNP gaining 42 seats to the Jamaica Labour Party's 21. Following that defeat, Holness served as Leader of the Opposition from January 2012 to March 2016, when he once again assumed the position of prime minister. In 2020, The Labour Party won a landslide in another general election, and on September 7th Holness was sworn in for another term as prime minister.

Kingston Western is a parliamentary constituency represented in the House of Representatives of the Jamaican Parliament. It elects one Member of Parliament MP by the first past the post system of election. The constituency was one of the original 32 Parliamentary seats. West Kingston is dominated by the Jamaica Labour Party (JLP) which has held the seat continuously since 1955. JLP Prime Ministers Alexander Bustamante, Hugh Shearer, Edward Seaga and Bruce Golding all represented the seat at one time or another, although Bustamante and Shearer did not represent the constituency during their premierships. 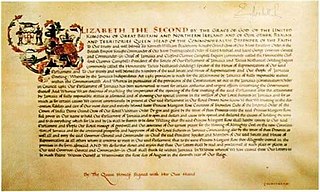 The Colony of Jamaica gained independence from the United Kingdom on 6 August 1962. In Jamaica, this date is celebrated as Independence Day, a national holiday. 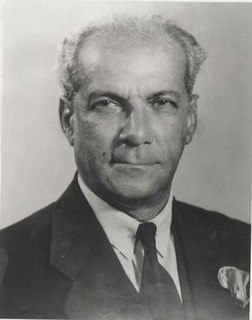 Norman Washington Manley MM, QC, National Hero of Jamaica, was a Jamaican statesman. A Rhodes Scholar, Manley became one of Jamaica's leading lawyers in the 1920s. Manley was an advocate of universal suffrage, which was granted by the British colonial government to the colony in 1944.

The attempted assassination of Bob Marley occurred in Jamaica on December 3, 1976, when seven armed men raided the house of reggae musician Bob Marley two days before he was to stage a concert in an attempt to quell recent violence. Politicians from across the political spectrum hoped to capitalize on Marley's support. While Marley remained neutral, many viewed him as tacitly supporting the prime minister Michael Manley and his democratic socialist People's National Party. Marley and three others were shot, but all survived. The gunmen were caught, tried, and executed.

The Jamaican political conflict is a long-standing feud between right-wing and left-wing elements in the country, often exploding into violence. The Jamaican Labor Party and the People's National Party have fought for control of the island for years and the rivalry has encouraged urban warfare in Kingston. Each side believes the other to be controlled by foreign elements, the JLP is said to be backed by the American Central Intelligence Agency and the PNP is said to have been backed by the Soviet Union and Fidel Castro.