Awards and decorations of the Sri Lanka Police

The current decorations and medals of the Sri Lanka Police were adapted from those of the Dominion of Ceylon in 1972 when Sri Lanka became a republic.

The United Nations Medal for participation in:

The Sri Lankan Armed Forces award medals and their associated ribbon bars in recognition of various levels of service, personal accomplishments and commemorative events while a regular- or volunteer serviceperson is a member of the Sri Lanka Army, Sri Lanka Navy and the Sri Lanka Air Force. Together with military badges, such awards are a means to outwardly display the highlights of a serviceperson's career.

Air Chief Marshal G Donald Perera VSV, USP is a Sri Lanka air officer who served as commander of the Air Force from 2002 to 2006 and Chief of the Defence Staff from 2006 to 2009. He served as Sri Lankan Ambassador to Israel.

Between 1948 and 1972, Ceylon was an independent country in the Commonwealth of Nations that shared a monarch with Australia, Canada, New Zealand, the United Kingdom, and certain other sovereign states. In 1948, the British Colony of Ceylon was granted independence as Ceylon. In 1972, the country became a republic within the Commonwealth, and its name was changed to Sri Lanka. 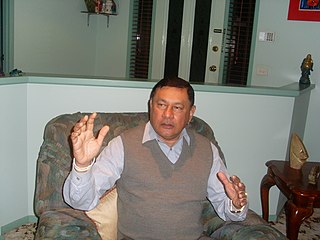 Major General Janaka Perera, RWP, RSP, VSV, USP, VSP, rcds, psc, CR was a Sri Lankan General and politician. He served as the Chief of Staff of the Sri Lanka Army and is considered one of the most distinguished generals in Sri Lankan history. After retiring from the army he served as a Sri Lankan High Commissioner to Australia and Ambassador to Indonesia. He was the opposition leader of the North Central Provincial Council until he and his wife were killed on 6 October 2008 by a suicide bomber. The LTTE have been blamed for the bombing by Sri Lankan president Mahinda Rajapaksa.

The Ceylon Armed Services Long Service Medal was a service medal of Ceylon from 1968 to 1972. It was granted to all ranks of the regular forces of the Ceylon Army, Royal Ceylon Navy and Royal Ceylon Air Force provided they had completed 12 years of service. It was replaced by the Sri Lanka Armed Services Long Service Medal in 1972 when Sri Lanka became a republic.

General Tissa Indraka Weeratunga, VSV was a Sri Lankan military leader. He was a former Commander of the Sri Lankan Army and first General Officer Commanding (GOC) of the Joint Operations Headquarters (JOH), he was later Sri Lanka's High Commissioner to Canada.

Lieutenant Colonel J.A.L Jayasinghe PWV, WWV, RWP, RSP, SF was an officer of the Special Forces Regiment of the Sri Lanka Army who was twice decorated with the Weera Wickrama Vibhushanaya (WWV) the second highest award for combat bravery in the Sri Lankan Armed Forces. He was killed in November 2008, while leading an eight-man Special Forces team on a covert operation 30 km behind enemy lines into territory held by the Liberation Tigers of Tamil Eelam (LTTE).

General Shantha H.S. Kottegoda, WWV, RWP, RSP, VSV, USP is a Sri Lankan general. He was the seventeenth Commander of the Sri Lankan Army from 1 July 2004 – 5 December 2007. He had served as the Sri Lankan Ambassador to Brazil and Thailand. In April 2019, following the Easter Sunday bombings he was appointed as the Permanent Secretary to the Ministry of Defence.

The Janadhipathi Police Weeratha Padakkama is awarded to police officers in Sri Lanka for gallantry or brave performance of duty. It is awarded by the President of Sri Lanka on the recommendations of the Inspector General of Police (IGP). The medal replaced the Queen's Police Medal which was awarded until Ceylon became a Republic in 1972.

The Sri Lanka Police Weeratha Padakkama is awarded to police officers in Sri Lanka for gallantry or brave performance of duty. It is awarded by the Inspector General of Police (IGP). The medal replaced the Ceylon Police Medal for Gallantry which was awarded until Ceylon became a Republic in 1972.

The Sri Lanka Police Vishishta Seva Padakkama is awarded to senior police officers in Sri Lanka for Meritorious Performance of Police duties. It is similar to the Vishista Seva Vibhushanaya of the Sri Lanka Armed Forces. The medal replaced the Ceylon Police Medal for Meritorious Service which was awarded until Ceylon became a Republic in 1972.

General Anuruddha Leuke Ratwatte, frequently referred to as Anuruddha Ratwatte, was a Sri Lankan soldier and politician. He was a Cabinet Minister and Deputy Minister of Defence.

Admiral Jayanath Colombage, RSP, VSV, USP, FNI is a Sri Lankan flag officer and diplomat. He is the current Permanent Secretary of the Ministry of Foreign Affairs, prior to which he served as Additional Secretary to the President for foreign relations. A career naval officer, he had served as the Commander of the Sri Lankan Navy, the professional head of the navy from September 2012 to June 2014. Jayanath is currently serving in Advisory board of Sea and Coast maritime magazine.

The 50th Independence Anniversary Commemoration Medal was a military decoration awarded by the Military of Sri Lanka to servicepersons of all actively serving ranks in both the regular and volunteer forces in commemoration of the 50th anniversary of Sri Lanka's Independence from the United Kingdom, on the 4 February 1998. A formal recommendation from service commanders was required for the award of the medal.