Clube Desportivo Nacional, commonly known as Nacional and sometimes Nacional da Madeira (Portuguese pronunciation:  [nɐsjuˈnal dɐ mɐˈðɐjɾɐ] ), is a Portuguese football club based in Funchal, on the island of Madeira. [2]

Founded on 8 December 1910, it currently plays in the LigaPro, Portugal's second-tier division of professional football. It plays its home games at Estádio da Madeira, also known as Estádio da Choupana. Built in 1998 and named at the time Estádio Eng. Rui Alves after the current club president Rui Alves, it seats approximately 5,132 people. The stadium is located in the north of Funchal, high in the mountains of the Choupana district.

The club's home colours are black and white striped shirts with black shorts and socks. Nacional is also known for being one of the clubs that formed Portuguese international Cristiano Ronaldo and to honour the club's most famous player they named their youth training facilities Cristiano Ronaldo Campus Futebol.

The Alvinegros best top-tier league finish was fourth in the 2003–04 Primeira Liga season and their best participation in European competitions was in the 2009–10 UEFA Europa League after beating Zenit St. Petersburg in the play-off round and managing to secure a third place in the group stage.

Nacional reached the first division for the first time ever in the mid-1990s, returning again in 2002–03. The following season was arguably the best ever season, as the side finished fourth in the league, just squeaking past Braga. In that season, three of its key players were Paulo Assunção, a defensive midfielder, and goal-machine Adriano, who netted 19 times. Both would later go to Porto, while the third key player, winger Miguelito, joined Benfica in 2006.

Nacional also had a quarter-final run in the domestic cup, and would lose in the first round of the subsequent 2004–05 UEFA Cup, being defeated twice by Sevilla. In 2006–07's edition, more of the same occurred with two early losses to Rapid București.

In the 2008–09 season, Nacional again edged Braga for the final fourth spot, mainly courtesy of Nenê, who scored 20 goals and won the Golden Boot honor. The side also reached the last-four in the Portuguese Cup, losing on aggregate 5–4 to Paços de Ferreira, with the decider coming at the Estádio da Madeira in the 90th minute.

2009–10 started without Nenê, who was sold to Cagliari for a club-record fee of €4.5 million. In August 2009, however, the club managed to defeat former UEFA Super Cup winners Zenit Saint Petersburg in the UEFA Europa League last round prior to the group stages; after a 4–3 home win, youngster Rúben Micael scored another last-minute goal, as the club was trailing 1–0 in Russia. In the next round, Nacional was drawn alongside Athletic Bilbao, Austria Wien, and Werder Bremen; the Austrians were beaten 5–1 in Madeira, but the Portuguese did not progress to the knockout rounds.

In the 2014–15 season, Nacional had a slow start, being eliminated of 2014–15 UEFA Europa League in the play-off round against Dinamo Minsk, after losing two times in a 2–0 away loss [3] and a 2–3 home loss. [4] But after that the club accomplished a major achievement, after beating rivals Marítimo in a 3–0 home win for the 2014–15 Primeira Liga [5] the Alvinegros managed to beat them again, this time in a 1–1 away draw for the quarter-finals of the 2014–15 Taça de Portugal where Nacional eventually won 6–5 at penalties, granting the team the qualification for the semi-finals of the competition. [6]

On 30 December 2016, Predrag Jokanović began his fourth spell as manager for the club. [7]

The Estádio da Madeira, better known as the Choupana, houses Nacional. The current stadium is located around nearby training pitches. The club also built an academy campus in name of its most famous player, Juventus' Cristiano Ronaldo. The stadium was renovated in 2007 for a new stand and also increasing the capacity to over 5,000 spectators. The total price of the renovations was €20 million.

In these new facilities, no stands were put behind the goals, with a tall fence used in its place. In mid-2007, the stadium name was changed to Estádio da Madeira, because of the excellent sports facilities.

Nacional has a big rivalry with Madeira-neighbours Marítimo. Historically, Marítimo dominated Nacional in the early years, being the first to reach European competition. Nacional, however, have crept up in the UEFA standings, finishing fourth twice and fifth in the 2000s.

The Madeira Derby is often associated with the clubs' followers differing culture and way of life. The fans of Nacional, being of a higher socio-economic status than those of Marítimo, were mainly lobbyists for the commercial expansion of Madeira, but the working class Marítimo followers were keen to preserve Madeira. This only exacerbated the ill-feeling between the clubs. 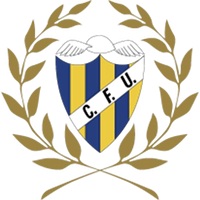 Sport Lisboa e Benfica "B", commonly known as Benfica B, is a Portuguese professional football team based in Seixal. Founded in 1999, dissolved in 2006, and restarted in 2012, it is the reserve team of Portuguese club S.L. Benfica. They play in the LigaPro, holding home matches at Benfica Campus's main pitch.

João Carlos Amaral Marques Coimbra is a Portuguese professional footballer who plays for Luxembourg club US Mondorf-les-Bains as a midfielder.

Alan Osório da Costa Silva, known simply as Alan, is a Brazilian former professional footballer who played as a winger.

Futebol Clube do Porto B, commonly known as Porto B, is a Portuguese professional football team, which serves as the reserve side of FC Porto. They compete in the LigaPro, the second division of Portuguese football, and play their home matches at the Estádio Municipal Jorge Sampaio in Pedroso, Vila Nova de Gaia.

Marcelo Boeck is a Brazilian professional footballer who plays for Fortaleza Esporte Clube as a goalkeeper. 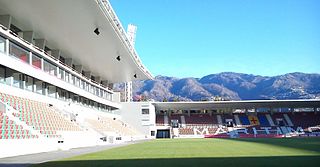 Estádio do Marítimo is a football stadium in Funchal, Portugal. It is the home stadium of Club Sport Marítimo and although much larger in its hey-day, the stadium can now hold 10,932 spectators.

Predrag Jokanović is a Serbian retired professional footballer, and is a manager.

Rui Carlos Pinho da Vitória is a Portuguese retired footballer who played as a midfielder, and is the current manager of Saudi Arabian club Al-Nassr FC.

Danilo Luís Hélio Pereira is a Portuguese professional footballer who plays as a defensive midfielder for Ligue 1 club Paris Saint-Germain, on loan from Porto, and the Portugal national team.

The 2011–12 Taça da Liga was the fifth edition of the Portuguese Taça da Liga. The first matches were played on 31 July 2011. The final was played on 14 April 2012, with Benfica defeating Gil Vicente 2–1 to win their fourth consecutive Taça da Liga.

Iuri José Picanço Medeiros is a Portuguese professional footballer who plays for S.C. Braga on loan from German club 1. FC Nürnberg as a midfielder.

Alexandre Xavier Pereira Guedes is a Portuguese footballer who plays for Japanese club Vegalta Sendai on loan from Vitória S.C. as a striker.

Rui Jorge Farto Correia is a Portuguese professional footballer who plays for C.D. Nacional as a defensive midfielder or a central defender.

The 2015–16 Primeira Liga was the 82nd season of the Primeira Liga, the top professional league for Portuguese association football clubs. The fixtures were determined by draw on 4 July 2015. The season began on 14 August 2015 and concluded on 15 May 2016.

The 2015–16 season was Sport Lisboa e Benfica's 112th season in existence and the club's 82nd consecutive season in the top flight of Portuguese football. It started on 9 August 2015 and concluded on 20 May 2016.

Ivo Ricardo Abreu Vieira is a Portuguese former footballer who played as a defender, and is the current manager of Saudi club Al-Wehda.

Francisco das Chagas Soares dos Santos, known as Tiquinho or Soares, is a Brazilian professional footballer who plays as a forward for Chinese club Tianjin TEDA.

João Mário Neto Lopes, known as João Mário, is a Portuguese professional footballer who plays for FC Porto as a forward.