The Cabinet of Fiji is a Government body of Ministers appointed by the Prime Minister of Fiji and responsible to the Parliament of Fiji. The Cabinet's constitutional basis is sections 90 to 96 of the 2013 Constitution of Fiji. [1]

Prior to the 2006 Fijian coup d'état and the 2009 Fijian constitutional crisis, Fiji's Cabinet was governed by the 1997 Constitution. An unusual feature of the constitution was to require a compulsory coalition cabinet, with every political party with more than 8 seats in the 71-member parliament required to be offered a proportionate number of cabinet posts. The model was not successfully implemented for nearly a decade, with the governments of both Mahendra Chaudhry and Laisenia Qarase refusing to offer Cabinet seats to their political opponents. It was only after the 2006 election that a full multi-party Cabinet was appointed. The multi-party model was not continued in the 2013 constitution.

After the 2018 General elections:

The politics of Fiji take place within the framework of a parliamentary representative democratic republic. Fiji has a multiparty system with the Prime Minister of Fiji as head of government. The executive power is exercised by the government. Legislative power is vested in both the government and the Parliament of Fiji. The judiciary is mostly independent of the executive and the legislature.

Chapter 6: The Parliament.Chapter 6 of the Fiji Constitution is titled The Parliament. The five Parts, further subdivided into forty sections making up this chapter, set out the composition, functions, and powers of Fiji's bicameral legislature.

Chapter 7: Executive Government.Chapter 7 of the 1997 Constitution is titled Executive Government. There are five Parts, further subdivided into thirty sections, which set out the organization, functions, and responsibilities of the executive branch of government. Modeled on the Westminster system, Fiji's constitution does not separate the Executive and Legislative branches of government as strictly as do many democracies, but despite considerable overlap, the branches of government are nevertheless constitutionally distinct.

Chapter 10: State Services.Chapter 10 of the 1997 Constitution of Fiji is titled State Services. Its fifteen sections establish certain civil service offices, specify their functions and jurisdictions, set out the qualifications and preconditions required of persons holding such offices, and prescribes the manner of their appointment.

The Prime Minister of Georgia is the head of government and chief executive of Georgia.

Cabinet collective responsibility, also known as collective ministerial responsibility, is a constitutional convention in Parliamentary systems that members of the cabinet must publicly support all governmental decisions made in Cabinet, even if they do not privately agree with them. This support includes voting for the government in the legislature. Some Communist political parties apply a similar convention of democratic centralism to their central committee. 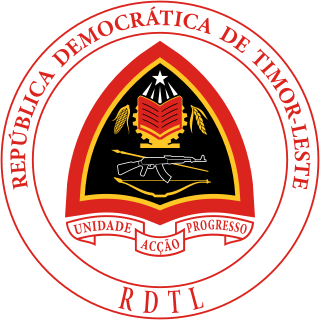