Last updated August 25, 2021
Clade of amphibians
Not to be confused with Caudate.

The Caudata are a group of amphibians containing the salamanders (Urodela) and all extinct species of salamander-like amphibians more closely related to salamanders than to frogs. They are typically characterized by a superficially lizard-like appearance, with slender bodies, blunt snouts, short limbs projecting at right angles to the body, and the presence of a tail in both larvae and adults.

Disagreement exists between different authorities as to the definition of the terms "Caudata" and "Urodela". Some maintain that Urodela should be restricted to the crown group, with Caudata being used for the total group. Others restrict the name Caudata to the crown group and use Urodela for the total group. The former approach seems to be most widely adopted and is used in this article. [1]

The origins and evolutionary relationships between the three main groups of amphibians (apodans, urodeles and anurans) is a matter of debate. A 2005 molecular phylogeny, based on rDNA analysis, suggested that the first divergence between these three groups took place soon after they had branched from the lobe-finned fish in the Devonian (around 360 million years ago), and before the breakup of the supercontinent Pangaea. The briefness of this period, and the speed at which radiation took place, may help to account for the relative scarcity of amphibian fossils that appear to be closely related to lissamphibians. [2] However, more recent studies have generally found more recent (Late Carboniferous [3] to Permian [4] ) age for the basalmost divergence among lissamphibians.

The first known fossil salamanders were Kokartus honorarius from the Middle Jurassic of Kyrgyzstan and two species of the apparently neotenic, aquatic Marmorerpeton from England [5] of a similar date. [6] They looked superficially like robust modern salamanders but lacked a number of anatomical features that characterise all modern salamanders. Karaurus sharovi from the Upper Jurassic of Kazakhstan resembled modern mole salamanders in morphology and probably had a similar burrowing lifestyle. [1] In 2020, new specimens of the previously enigmatic tetrapod Triassurus from the Middle Triassic of Kyrgyzstan were described, revealing it to be the oldest known caudatan. [7]

All known fossil salamanders and all extinct species fall under the order Caudata, while sometimes the extant species are grouped together as the Urodela. [8] [9] There are about 655 extant species of salamander. [1]

Salamanders are a group of amphibians typically characterized by a lizard-like appearance, with slender bodies, blunt snouts, short limbs projecting at right angles to the body, and the presence of a tail in both larvae and adults. All 10 present-day salamander families are grouped together under the order Urodela. Salamander diversity is highest in the Northern Hemisphere and most species are found in the Holarctic realm, with some species present in the Neotropical realm.

The Lissamphibians are a group of tetrapods that includes all modern amphibians. Lissamphibians consist of three living groups: the Salientia, the Caudata, and the Gymnophiona. A fourth group, the Allocaudata, was moderately successful, spanning 160 million years from the Middle Jurassic to the Early Pleistocene, but became extinct 2 million years ago. 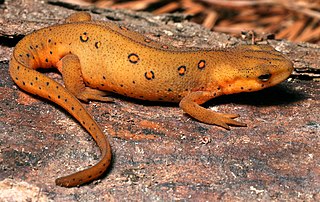 Salamandridae is a family of salamanders consisting of true salamanders and newts. Salamandrids are distinguished from other salamanders by the lack of rib or costal grooves along the sides of their bodies and by their rough skin. Their skin is very granular because of the number of poison glands. They also lack nasolabial grooves. Most species of Salamandridae have moveable eyelids but lack lacrimal glands.

Caecilians are a group of limbless, vermiform or serpentine amphibians. They mostly live hidden in the ground and in stream substrates, making them the least familiar order of amphibians. All modern caecilians and their closest fossil relatives are grouped as a clade, Apoda, within the larger group Gymnophiona, which also includes more primitive extinct caecilian-like amphibians. Caecilians are mostly distributed in the tropics of South and Central America, Africa, and southern Asia. Their diet consists of small subterranean creatures such as earthworms.

Gymnophiona is the group of amphibians that includes the legless caecilians and all amphibians more closely related to them than to frogs or salamanders. The name derives from the Greek words γυμνος and οφις, as the caecilians were originally thought to be related to snakes. The body is cylindrical dark brown or bluish black in colour. The skin is slimy and bears grooves or ringlike markings.

The Batrachia are a clade of amphibians that includes frogs and salamanders, but not caecilians nor the extinct allocaudates. The name Batrachia was first used by French zoologist Pierre André Latreille in 1800 to refer to frogs, but has more recently been defined in a phylogenetic sense as a node-based taxon that includes the last common ancestor of frogs and salamanders and all of its descendants. The idea that frogs and salamanders are more closely related to each other than either is to caecilians is strongly supported by morphological and molecular evidence, they are for instance the only vertebrates able to raise and lower their eyes, but an alternative hypothesis exists in which salamanders and caecilians are each other's closest relatives as part of a clade called the Procera, with frogs positioned as the sister taxon of this group. 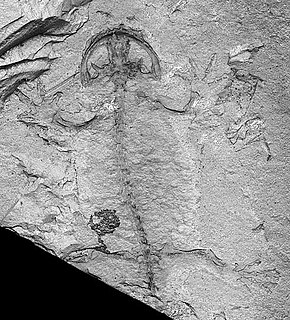 Batrachomorpha is a name traditionally given to recent and extinct amphibians that are more closely related to modern amphibians than they are to reptiles. It most often includes the extinct groups Temnospondyli and Lepospondyli. The first tetrapods were all amphibians in the physiological sense that they laid their eggs in water, and are colloquially sometimes referred to as labyrinthodonts or stegocephalians. In this scheme, batrachomorphs composed one branch of these early amphibians, while the reptiliomorphs composed the other. While the actual phylogeny of the modern amphibians is not well understood, their ancestors are descended from one line of batrachomorphs. All other living tetrapods are descended from one branch of reptiliomorphs, the amniotes. Amniotes achieved dominance, while all other reptiliomorphs and most batrachomorphs have gone extinct. 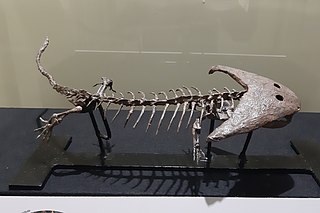 Lepospondyli is a diverse taxon of early tetrapods. With the exception of one late-surviving lepospondyl from the Late Permian of Morocco, lepospondyls lived from the Early Carboniferous (Mississippian) to the Early Permian and were geographically restricted to what is now Europe and North America. Five major groups of lepospondyls are known: Adelospondyli; Aïstopoda; Lysorophia; Microsauria; and Nectridea. Lepospondyls have a diverse range of body forms and include species with newt-like, eel- or snake-like, and lizard-like forms. Various species were aquatic, semiaquatic, or terrestrial. None were large, and they are assumed to have lived in specialized ecological niches not taken by the more numerous temnospondyl amphibians that coexisted with them in the Paleozoic. Lepospondyli was named in 1888 by Karl Alfred von Zittel, who coined the name to include some tetrapods from the Paleozoic, that shared some specific characteristics in the notochord and teeth. Lepospondyls have sometimes been considered to be either related or ancestral to modern amphibians or to Amniota. It has been suggested that the grouping is polyphyletic, with aïstopods being primitive stem-tetrapods, while microsaurs are primitive reptiles. 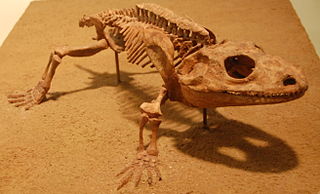 Dissorophoideans are a clade of medium-sized, temnospondyl amphibians that appeared during the Moscovian in Euramerica, and continued through to the Late Permian and the Early Triassic of Gondwana. They are distinguished by various details of the skull, and many forms seem to have been well adapted for life on land. Since 2008, Lissamphibia has been progressively widely considered part of this clade, but this position is still disputed by some authors.

Gerobatrachus is an extinct genus of amphibamid temnospondyl that lived in the Early Permian, approximately 290 million years ago (Ma), in the area that is now Baylor County, Texas. When it was first described in 2008, Gerobatrachus was announced to be the closest relative of Batrachia, the group that includes modern frogs and salamanders. It possesses a mixture of characteristics from both groups, including a large frog-like head and a salamander-like tail. These features have led to it being dubbed a frogamander by the press. Some more recent studies place Gerobatrachus as the closest relative of Lissamphibia, the group that contains all modern amphibians including frogs, salamanders, and caecilians, or place modern amphibians far from Gerobatrachus within a group called Lepospondyli.

The Albanerpetontidae are an extinct family of small amphibians, native to the Northern Hemisphere during the Mesozoic and Cenozoic. They are thought to be allied with living amphibians of the order Lissamphibia. Despite a superficially salamander-like bodyform, their anatomy is strongly divergent from modern amphibians in numerous aspects. The fossil record of albanerpetontids spans over 160 million years from the Middle Jurassic to the beginning of the Pleistocene, about 2.13-2 million years ago.

Monsechobatrachus is an extinct genus of prehistoric frogs. It is known from a complete but very poorly preserved skeleton from Monsech in Spain.

Marmorerpeton is an extinct genus of prehistoric stem-salamanders that lived in Europe during the Middle Jurassic. Remains are known from the Bathonian aged Forest Marble Formation of England and the Kilmaluag Formation of Scotland. They are among the earliest-known salamanders, and are probably older than Karaurus. The teeth appear to have been weakly pedicellate. The genus appears to have been neotenic, based on a few morphological characters and on the presence of calcified cartilage in the medulla of its humerus.

The Karauridae are a family of salamander-like amphibians that lived from the Middle Jurassic to Late Jurassic in Central Asia. The members are some of the oldest known salamanders.

A timetree is a phylogenetic tree scaled to time. It shows the evolutionary relationships of a group of organisms in a temporal framework.

Chinlestegophis is a diminutive Late Triassic stereospondyl that has been interpreted as a putative stem caecilian, a living group of legless burrowing amphibians. If Chinlestegophis is indeed both an advanced stereospondyl and a relative of caecilians, this means that stereospondyls survived to the present day; historically the group was thought to have gone extinct by the early Cretaceous. Chinlestegophis jenkinsi, the type and only species, is known from two partial skulls discovered in the Chinle Formation in Colorado.

Triassurus is an extinct genus of amphibian, and the oldest member of Caudata. It lived in the Middle to Upper Triassic (Ladinian-Carnian) and its fossil remains have been found in the Madygen Formation in Kyrgyzstan. The type species is T. sixtelae.