Community property (United States) also called Community of Property (South Africa) is a marital property regime that originated in civil law jurisdictions but is now also found in some common law jurisdictions.[ citation needed ]. Community of property regimes can be found in countries around the world including Sweden, [1] Germany, [2] Italy, [3] France, [4] South Africa [5] and parts of the United States. [6]

Custom of Paris in New France

In South Africa, if a couple does not sign an antenuptial contract, before a notary public, which is subsequently registered at a deeds office, prior to marriage, they are married in community of property, which means that all of their assets and liabilities (even those acquired before the marriage) are merged into a joint estate during their marriage, in which each spouse has an undivided half-share. Each spouse has equal power to deal independently with the estate, except that certain major transactions require the consent of both spouses. [7] One of the consequences of community of property in South Africa is that if one spouse is declared insolvent (bankrupt) during the marriage, the other also becomes insolvent, a potentially devastating consequence.

Divorce, also known as dissolution of marriage, is the process of terminating a marriage or marital union. Divorce usually entails the canceling or reorganizing of the legal duties and responsibilities of marriage, thus dissolving the bonds of matrimony between a married couple under the rule of law of the particular country or state. Divorce laws vary considerably around the world, but in most countries, divorce requires the sanction of a court or other authority in a legal process, which may involve issues of distribution of property, child custody, alimony, child visitation/access, parenting time, child support, and division of debt. In most countries, monogamy is required by law, so divorce allows each former partner to marry another person.

Alimony is a legal obligation on a person to provide financial support to their spouse before or after marital separation or divorce. The obligation arises from the divorce law or family law of each country.

A prenuptial agreement, antenuptial agreement, or premarital agreement, is a written contract entered into by a couple prior to marriage or a civil union that enables them to select and control many of the legal rights they acquire upon marrying, and what happens when their marriage eventually ends by death or divorce. Couples enter into a written prenuptial agreement to supersede many of the default marital laws that would otherwise apply in the event of divorce, such as the laws that govern the division of property and retirement benefits and savings, and the right to seek alimony with agreed-upon terms that provide certainty and clarify their marital rights. A premarital agreement may also contain waivers of a surviving spouse's right to claim an elective share of the estate of the deceased spouse.

Matrimonial regimes, or marital property systems, are systems of property ownership between spouses providing for the creation or absence of a marital estate and if created, what properties are included in that estate, how and by whom it is managed, and how it will be divided and inherited at the end of the marriage. Matrimonial regimes are applied either by operation of law or by way of prenuptial agreement in civil-law countries, and depend on the lex domicilii of the spouses at the time of or immediately following the wedding.. In most common law jurisdictions, the default and only matrimonial regime is separation of property, though some US states, known as community property states, are an exception. Also, in England, the birthplace of common law, pre-nuptial agreements were until recently completely unrecognized, and although the principle of separation of property prevailed, Courts are enabled to make a series of orders upon divorce regulating the distribution of assets.

A qualified domestic relations order, is a judicial order in the United States, entered as part of a property division in a divorce or legal separation that splits a retirement plan or pension plan by recognizing joint marital ownership interests in the plan, specifically the former spouse's interest in that spouse's share of the asset. A QDRO's recognition of spousal ownership interest in a plan participant's (employee's) pension plan awards a portion of the plan participant's benefit to an alternate payee. An alternate payee must be a spouse, former spouse, child or other dependent of the plan participant. A QDRO may also be entered for spousal support or child support.

Australian family law is principally found in the federal Family Law Act 1975 as well as in other laws and the common law and laws of equity, which affect the family and the relationship between those people, including when those relationships end. Most family law is practised in the Federal Circuit Court of Australia, Family Court of Australia or the Family Court of Western Australia depending on the location and complexity of the matter. Australia recognises marriages entered into overseas as well as divorces obtained overseas if they were effected in accordance with the laws of that country. Australian marriage and "matrimonial causes" are recognised by sections 51(xxi) and (xxii) of the Constitution of Australia and internationally by marriage law and conventions, such as the Hague Convention on Marriages (1978).

Forced heirship is a form of testate partible inheritance whereby the estate of a deceased is separated into (1) an indefeasible portion, the forced estate, passing to the deceased's next-of-kin (conjunctissimi), and (2) a discretionary portion, or free estate, to be freely disposed of by will. Forced heirship is generally a feature of civil-law legal systems which do not recognize total freedom of testation. Normally, the deceased's estate is in-gathered and wound up without discharging liabilities, which means accepting inheritance includes accepting the liabilities attached to inherited property. The forced estate is divided into shares which include the share of issue and the spousal share. This provides a minimum protection that cannot be defeated by will. The free estate, on the other hand, is at the discretion of a testator to be distributed by will on death to whomever he or she chooses. Takers in the forced estate are known as forced heirs.

The Family Law Act 1975, referred to as the FLA by legal practitioners, is an Act of the Australian Parliament. It has 15 parts and is the main Australian legislation dealing with divorce, parenting arrangements between separated parents, property separation, and financial maintenance involving children or divorced or separated de facto partners. It came into effect on 1 January 1976, repealing the Matrimonial Causes Act 1961, which had been largely based on fault.

This article is a general overview of divorce laws around the world. Every nation in the world allows its residents to divorce under some conditions except the Philippines and the Vatican City, an ecclesiastical sovereign city-state, which has no procedure for divorce. In these two countries, laws only allow annulment of marriages.

Divorce in the United States, also known as dissolution of marriage, is a legal process in which a judge or other authority dissolves the bonds of matrimony existing between two persons, thus restoring them to the status of being single and permitting them to marry other individuals. In the United States, marriage and divorce fall under the jurisdiction of state governments, not the federal government.

Van Camp accounting is one of the two methods California community property law uses to deal with community funds and/or labor used to enhance the value of separate property. The method is named after a 1921 divorce case, Van Camp v. Van Camp.

International matrimonial law is an area of private international law. The area specifically deals with relations between spouses and former spouses on issues of marriage, divorce and child custody. In the last 50 years, the States Members of the Hague Conference on Private International Law have attempted to harmonize domestic matrimonial laws and judicial rulings across international borders in these areas.

Marriage in South Africa exists in a number of different forms, as a result of the diversity of religions and cultures in the country. A man in South Africa may have more than one spouse but a South African woman may only have one spouse. Historically the legal definition of marriage, derived from the Roman-Dutch law, was limited to monogamous marriages between opposite-sex couples. Since 1998 the law has recognised marriages, including polygynous marriages, conducted under African customary law, and in 2006 South Africa became the fifth country in the world to allow same-sex marriage.

The economics of marriage includes the economic analysis of household formation and break up, of production and distribution decisions within the household. It is closely related to the law and economics of marriages and households. Grossbard-Shechtman identifies three approaches to the subject: the Marxist approach, the neo-classical approach and the game theoretic approaches. Marital status has a positive influence on economic status. There is a marriage prime for males that the wage of married males is 15% higher than the wage of never married male. The Uniform Marital Property Act issued clause on the distribution of marital property and individual property. The Uniform Premarital Agreements Act offers clauses to guide two spouses to make an agreement on distribution of rights and obligations before marriage. 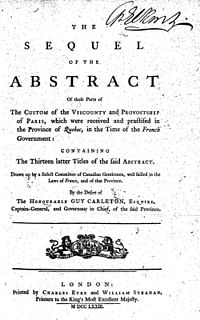 The Custom of Paris was one of France's regional custumals of civil law. It was the law of the land in Paris and the surrounding region in the 16th–18th centuries and was applied to French overseas colonies, including New France. First written in 1507 and revised in 1580 and 1605, the Custom of Paris was a compilation and systematization of Renaissance-era customary law. Divided into 16 sections, it contained 362 articles concerning family and inheritance, property, and debt recovery. It was the main source of law in New France from the earliest settlement, but other provincial customs were sometimes invoked in the early period. 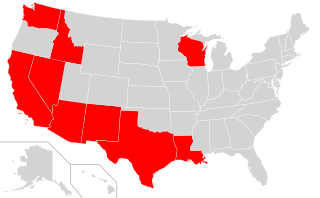