The Ethics of Liberty

The Ethics of Liberty is a 1982 book by American philosopher and economist Murray N. Rothbard, in which the author expounds a libertarian political position.

Rothbard provides an exposition of the libertarian political position. He argues for the case of freedom as a concept of natural rights and applies it to a variety of practical problems.

Reception of the book has been positive in libertarian circles. Many praise the book for its incisive analysis of natural law and its practical applications. Libertarian commentator Sheldon Richman says : "The Ethics of Liberty is a great book that deserves the attention of anyone interested in the good society and human flourishing." [1]

The economist Hans-Hermann Hoppe described The Ethics of Liberty as Murray Rothbard's second magnum opus, the other being Man, Economy, and State (1962). [2]

The philosopher Matt Zwolinski criticized the book, writing that Rothbard's discussion of self-ownership in chapter six "rests on a fundamental confusion between descriptive and normative claims." [3]

Anarcho-capitalism is a political philosophy and economic theory that advocates the elimination of centralized states in favor of self-ownership, private property and free markets. Anarcho-capitalists hold that in the absence of statute, society tends to contractually self-regulate and civilize through the spontaneous and organic discipline of the free market which they describe as a voluntary society. Anarcho-capitalists support wage labour as a voluntary trade and believe that neither protection of person and property nor victim compensation requires a state.

Murray Newton Rothbard was an American heterodox economist of the Austrian School, historian, and a political theorist. Rothbard was the founder and leading theoretician of anarcho-capitalism, a staunch advocate of historical revisionism and a central figure in the 20th-century American libertarian movement. He wrote over twenty books on political theory, revisionist history, economics, and other subjects. 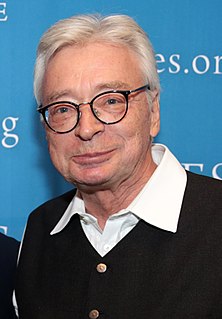 Hans-Hermann Hoppe is a German-born American economist of the Austrian School and paleolibertarian anarcho-capitalist philosopher. He is Professor Emeritus of Economics at the University of Nevada, Las Vegas (UNLV), Senior Fellow of the Ludwig von Mises Institute, former Editor of the Journal of Libertarian Studies, a lifetime member of the Royal Horticultural Society and the founder and president of the Property and Freedom Society.

The homestead principle is the principle by which one gains ownership of an unowned natural resource by performing an act of original appropriation. Appropriation could be enacted by putting an unowned resource to active use, joining it with previously acquired property or by marking it as owned. 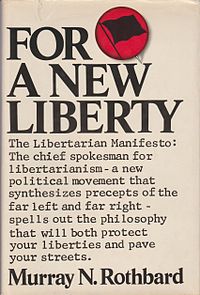 For a New Liberty: The Libertarian Manifesto is a book by American economist and historian Murray Rothbard, in which the author promotes anarcho-capitalism. The work has been credited as an influence on modern libertarian thought and on part of the New Right. 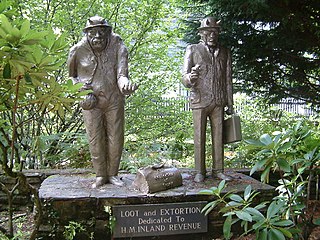 Argumentation ethics is a proposed proof of the libertarian private property ethic developed in 1988 by Hans-Hermann Hoppe, a Professor Emeritus with the University of Nevada, Las Vegas College of Business and Ludwig von Mises Institute Senior Fellow. Responses have mainly come from Hoppe's colleagues at the Mises Institute, among whom the argument's reception has been mixed.