Crisis in Six Scenes is an American television miniseries written and directed by Woody Allen for Amazon Studios. [1] [2] [3] [4] Allen wrote and directed six episodes for the half-hour series, marking the first time he has done so for television. It is available exclusively on Amazon Prime Video.

The series premiered on September 30, 2016, [1] to generally unfavorable reviews. Allen himself denounced the series, calling it a "cosmic embarrassment," and stated that it would conclude with one season. [5]

The deal with Allen was seen as giving Amazon a possible advantage in its competition with Netflix and television networks. The series was announced within days of Amazon winning the Golden Globe Award for the comedy-drama Transparent , another original series. [6] Allen had last written new material for television in the 1950s, when he wrote for Sid Caesar. [4]

In a May 2015 interview, Allen said that progress on the series had been "very, very difficult" and that he had "regretted every second since I said OK". [7] [8] Allen has said of the series, "I don't know how I got into this. I have no ideas and I'm not sure where to begin. My guess is that Roy Price [the head of Amazon Studios] will regret this." [2] [3] [9]

In January 2016, it was announced that the series would star Allen, Elaine May and Miley Cyrus, and that shooting would begin in March. [10] In February 2016, it was announced that John Magaro and Rachel Brosnahan had joined the cast. [11] In March 2016, Michael Rapaport, Becky Ann Baker, Margaret Ladd, Joy Behar, Rebecca Schull, David Harbour and Christine Ebersole had joined the cast of the series. [12]

For about three weeks in early 2016, filming for the six episodes took place at 508 Scarborough Road, in Briarcliff Manor, New York. [13]

On review aggregator website Rotten Tomatoes, the series has an approval rating of 18%, based on 50 reviews, with an average rating of 4.72/10. The site's critical consensus reads, "Woody Allen's filmmaking skills prove a poor fit for the small screen in Crisis in Six Scenes, a talk-heavy, unfunny, and overall disengaged production buried below numerous superior offerings." [14] On Metacritic, the series has a score 44 out of 100, based on 29 critics, indicating "mixed or average reviews". [15]

Rodrigo Perez from The Playlist gave the series a D+ on an A+ to F scale, and described it as "Hamfisted and nearly unwatchable." [16]

Allen himself had openly expressed severe misgivings about the project. [2] [3] [17] At the 2015 Cannes Film Festival, Allen said in reference to the show, "It was a catastrophic mistake. I don't know what I'm doing. I'm floundering. I expect this to be a cosmic embarrassment." [18]

Elaine Iva May is an American comedian, filmmaker, playwright, and actress. She has received numerous awards including an Academy Award, a BAFTA Award, a Grammy Award, and a Tony Award. She made her initial impact in the 1950s with her improvisational comedy routines with Mike Nichols, before transitioning as a groundbreaking film director starting in the 1970s onward. 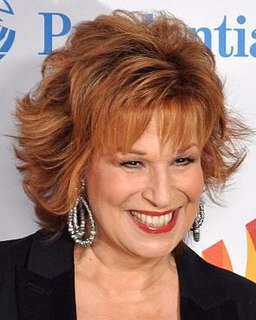 Josephine Victoria "Joy" Behar is an American comedian, television host, actress, and writer. She co-hosts the ABC daytime talk show The View, where she is the only original panelist still regularly appearing. She hosted The Joy Behar Show on HLN from 2009 to 2011 and Joy Behar: Say Anything! on Current TV, from 2012 until the channel switched formats in August 2013. Behar's latest weekly late-night talk show, Late Night Joy, aired on TLC in 2015. She also wrote The Great Gasbag: An A–Z Study Guide to Surviving Trump World. 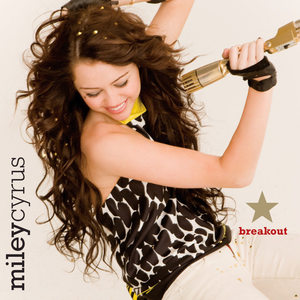 Breakout is the second studio album by American singer Miley Cyrus, released on July 22, 2008, by Hollywood Records. Despite being her second album, it is her first record not affiliated with the television series Hannah Montana, as Meet Miley Cyrus was released as part of a joint album with her character. The majority of the record was composed as she traveled during her headlining Best of Both Worlds Tour (2007–08). Overall, Breakout is dominant on pop rock but explores a variety of other musical genres. Lyrical themes addressed in the album relate to breakups and coming of age. Most of the album was produced by Rock Mafia. Matthew Wiler and Scott Cutler also produced. Cyrus co-wrote eight out of thirteen tracks. 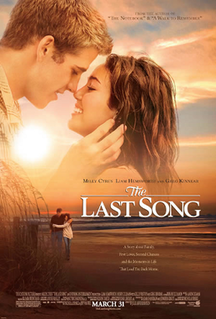 The Last Song is a 2010 American coming-of-age teen romantic drama film developed alongside Nicholas Sparks' 2009 novel of the same name. The film was directed by Julie Anne Robinson in her feature film directorial debut and co-written by Sparks and Jeff Van Wie. The Last Song stars Miley Cyrus, Liam Hemsworth, and Greg Kinnear, and follows a troubled teenager as she reconnects with her estranged father and falls in love during a summer in a quiet Southern United States beach town. 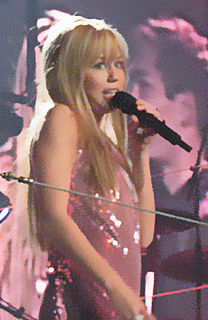 Amazon Studios is an American television and film producer and distributor that is a subsidiary of Amazon. It specializes in developing television series and distributing and producing films. It was started in late 2010. Content is distributed through theaters and Amazon Prime Video, Amazon's digital video streaming service, whose competitors include Netflix and Hulu, among others. 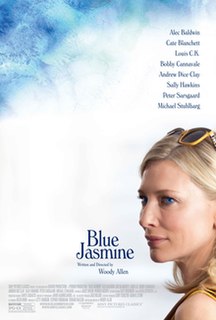 Blue Jasmine is a 2013 American comedy-drama film written and directed by Woody Allen. The film tells the story of a rich Manhattan socialite who falls on hard times and has to move into her working-class sister's apartment in San Francisco. 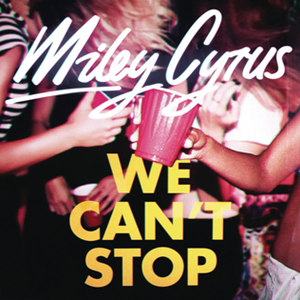 "We Can't Stop" is a song by American singer Miley Cyrus, from her fourth studio album Bangerz (2013). It was released on June 3, 2013, by RCA Records as the lead single from the album. The song was written and produced by Mike Will Made It, P-Nasty, and Rock City, with additional songwriting provided by Cyrus, Doug E. Fresh, and Slick Rick. "We Can't Stop" is a pop, R&B and electropop song about a house party and recreational drug use. 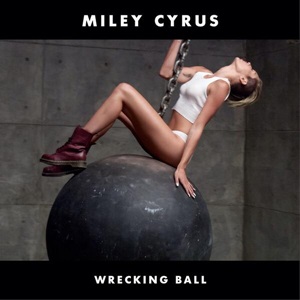 "Wrecking Ball" is a song recorded by American singer Miley Cyrus for her fourth studio album, Bangerz (2013). It was released on August 25, 2013, by RCA Records as the album's second single. The song was written by Mozella, Stephan Moccio, Sacha Skarbek, with Dr. Luke and Cirkut, who also served as the producers, credited as co-writers along with David Kim. "Wrecking Ball" is a pop ballad which lyrically discusses the deterioration of a relationship.

The Bangerz Tour was the fourth concert tour by American singer Miley Cyrus. It was held in support of her fourth studio album, Bangerz (2013). The tour visited the Americas, Europe, and Oceania through five legs. It spanned from February 14 to October 23, 2014. Cyrus performed all songs from the album excluding "Hands in the Air", among covers of songs by other artists. Cyrus' allergic reaction along with logistical issues led to three cancellations in the tour's scheduled dates. A show in Santo Domingo, Dominican Republic was banned by the government citing moral grounds.

American singer, songwriter, and actress Miley Cyrus has appeared in music videos, films, television series and video games. From 2006 to 2011, Cyrus starred in the television series Hannah Montana as Miley Stewart and her alter ego, Hannah Montana. In 2009, Cyrus starred in the feature film Hannah Montana: The Movie, whose soundtrack included her lead single "The Climb". Her other films included voicing the role of Penny in the animated film Bolt in 2008, The Last Song with Liam Hemsworth in 2010, and LOL with Demi Moore in 2012. Her song "When I Look at You" was part of The Last Song soundtrack with the music video directed by the film's producer, Adam Shankman. She has released 39 music videos and appeared on 12 music videos. 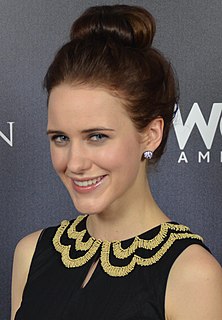 Rachel Elizabeth Brosnahan is an American actress. She stars as aspiring stand-up comedian Miriam "Midge" Maisel in the Amazon Prime Video period comedy series The Marvelous Mrs. Maisel (2017–present), for which she won a Primetime Emmy Award for Outstanding Lead Actress in a Comedy Series in 2018 and two consecutive Golden Globe Awards for Best Actress – Television Series Musical or Comedy in 2018 and 2019. She also had a recurring role in the Netflix political thriller series House of Cards (2013–2015) as Rachel Posner, for which she received a Primetime Emmy Award nomination, and played a lead role in the WGN drama series Manhattan (2014–2015). 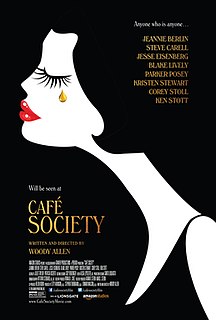 Café Society is a 2016 American romantic comedy-drama film written and directed by Woody Allen. It stars Jesse Eisenberg, Kristen Stewart, Steve Carell, Jeannie Berlin, Blake Lively, Parker Posey, Corey Stoll, and Ken Stott. The plot follows a young man who moves to Hollywood in the 1930s, where he falls in love with the assistant to his uncle, a powerful talent agent. 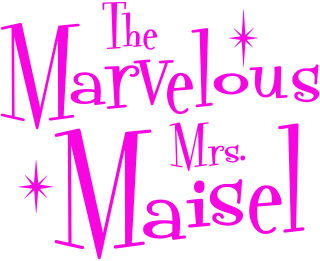 The Marvelous Mrs. Maisel is an American period comedy-drama television series, created by Amy Sherman-Palladino, that premiered on March 17, 2017, on Amazon Prime Video. Set in the late 1950s and early 1960s, it stars Rachel Brosnahan as Miriam "Midge" Maisel, a New York housewife who discovers she has a knack for stand-up comedy and pursues a career in it. It also stars Alex Borstein, Michael Zegen, Marin Hinkle, Tony Shalhoub, Kevin Pollak, Caroline Aaron, Jane Lynch and Luke Kirby. The pilot episode received critical acclaim and the series was picked up by Amazon Studios. On February 17, 2022, Amazon renewed the series for a fifth and final season. 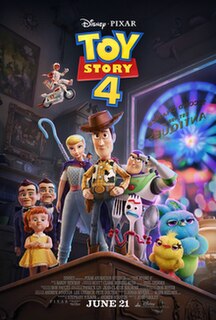 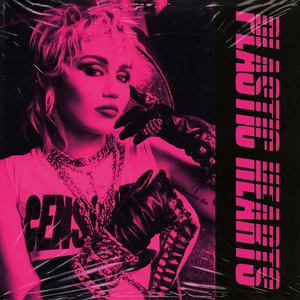 Plastic Hearts is the seventh studio album by American singer Miley Cyrus. It was released on November 27, 2020, by RCA Records, and was her final album with the label; she signed with Columbia Records in early 2021. Marking a departure from Cyrus' previous releases, Plastic Hearts is primarily a rock, pop, synth-pop, and glam rock record, with influences from country, punk rock, new wave, arena rock, industrial, disco, and power pop. Most of the album was produced by Andrew Watt and Louis Bell, with further collaboration with Mark Ronson and Andrew Wyatt. Guest vocals include Dua Lipa, Billy Idol, Joan Jett and Stevie Nicks.