Don Jon is a 2013 American romantic comedy-drama film [5] written and directed by Joseph Gordon-Levitt in his feature directorial debut. The film stars Gordon-Levitt, Scarlett Johansson, and Julianne Moore, with Rob Brown, Glenne Headly, Brie Larson, and Tony Danza in supporting roles. The film premiered under its original title Don Jon's Addiction [6] [7] at the Sundance Film Festival on January 18, 2013, [8] and had its wide release in the United States on September 27, 2013. [4]

On a night out with his two best friends, Bobby and Danny, Jon sees Barbara Sugarman, a young woman from a more affluent background. Although she finds him interesting, she declines his offer for a one-night stand. He tracks her down on Facebook and invites her to lunch. There is mutual attraction, but Barbara insists on a long-term courtship, which proceeds for over a month without sex. She encourages Jon to take night classes to get an office job outside the service industry, and Jon indulges her love for romance movies, which he usually dismisses as unrealistic fantasy. They meet each other's families and Jon's parents love her.

The two have sex, but Jon is still dissatisfied. He loves Barbara and considers her body perfect, but still finds pornography more satisfying. While she sleeps, Jon watches pornography. Barbara catches him and is shocked. She prepares to leave Jon, but he denies that he watches pornography and claims it was a joke emailed to him by a friend.

Their relationship resumes, with Jon watching pornography primarily outside his apartment, concealing his habit from Barbara. He is caught watching a video on his cell phone before a college class by Esther, a middle-aged woman Jon earlier encountered weeping by herself. Jon politely brushes her off. Barbara continues asserting control, insisting that cleaning his own apartment, a task Jon finds satisfying, is not something she is comfortable with him doing. Barbara checks the browser history on Jon's computer, confronts him with proof that he has continued viewing pornography, then ends their relationship.

Jon tells his family about the break-up with Barbara. While they are displeased, his sister Monica states that Barbara was just dating Jon because she knew she could manipulate him. Jon meets with Barbara and apologizes for lying to her about the pornography. Barbara says she asked one thing of him and he failed. Jon replies that she asked many things of him and he could not meet her expectations. As she tells him to never contact her again, he sees how shallow she is and realizes he is better off without her.

Jon begins dating Esther. Even though she is considerably older and neither has any interest in getting married, Jon believes he really understands Esther and that they can get emotionally lost in each other.

Development for Don Jon began in 2008, when Gordon-Levitt wrote early notes about the film. Rian Johnson gave feedback during the writing process and reviewed several cuts of the film. Christopher Nolan cautioned against both directing and starring in the film due to the extra challenges it would bring. [9]

Gordon-Levitt has credited his experience directing short films for HitRecord for teaching him what he needed to know to make Don Jon and has said that he hopes to make films in a more collaborative way in the future. [10]

Principal photography for Don Jon began in May 2012.

Don Jon received positive reviews from critics, with most giving praise to the lead performances, especially Gordon-Levitt's. Rotten Tomatoes gives the film a 79% approval rating, based on reviews from 199 critics, with a rating average of 6.8/10. The website's critical consensus states: "Don Jon proves to be an amiable directing debut for Joseph Gordon-Levitt, and a vivacious showcase for his co-star, Scarlett Johansson". [12] Metacritic gives a score of 66 out of 100 based on reviews from 41 critics, indicating "generally favorable" reviews. [13] Audiences surveyed by CinemaScore on the opening weekend, gave Don Jon a C+ grade. [14] [15]

Don Jon received very positive reviews at the Sundance Film Festival. Entertainment Weekly managing editor Jess Cagle called the film "one of the best movies I saw at the fest" and wrote, "Funny, touching, smart, and supremely confident, Don Jon is also Gordon-Levitt's feature directorial debut, and it establishes him as one of Hollywood's most exciting new directors." [16] William Goss of Film.com praised Levitt for his "assured style" as both director and screenwriter. [17] Edward Douglas of ComingSoon.net gave high praise to the screenplay. [18] Consensus of the film when it was played at the Sundance Film Festival, as noted by Odie Henderson, was that Don Jon was a "more fun version" of the 2011 film Shame . [19]

The supporting actresses Scarlett Johansson and Julianne Moore received praise for their performances. [20] [21] Stephanie Zacharek of The Village Voice praised the film, writing: "There's no dancing in Gordon-Levitt's writing-directing debut, Don Jon, although the movie is so heavily reminiscent—in the good way—of Saturday Night Fever that an arm-swinging paint-can reverie wouldn't be out of place." [22] 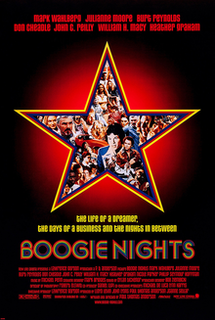 Joseph Leonard Gordon-Levitt is an American actor, filmmaker, singer, and entrepreneur. As a child, Gordon-Levitt appeared in the films A River Runs Through It, Angels in the Outfield, Holy Matrimony and 10 Things I Hate About You, and as Tommy Solomon in the TV series 3rd Rock from the Sun. He took a break from acting to study at Columbia University, but dropped out in 2004 to pursue acting again. He has since starred in (500) Days of Summer, Inception, Hesher, 50/50, Premium Rush, Miracle at St. Anna, The Brothers Bloom,The Dark Knight Rises, Brick, Looper, The Lookout, Manic, Lincoln, Mysterious Skin, and G.I. Joe: The Rise of Cobra. He portrayed Philippe Petit in the Robert Zemeckis-directed film The Walk (2015), and whistleblower Edward Snowden in the Oliver Stone film Snowden (2016). For his leading performances in (500) Days of Summer and 50/50, he was nominated for the Golden Globe Award for Best Actor – Motion Picture Musical or Comedy. 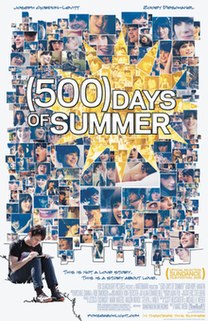 500 Days of Summer is a 2009 American romantic comedy-drama film by first-time director Marc Webb from a screenplay written by Scott Neustadter and Michael H. Weber, and produced by Mark Waters. The film stars Joseph Gordon-Levitt and Zooey Deschanel, and employs a nonlinear narrative structure, with the story based upon its male protagonist and his memories of a failed relationship. 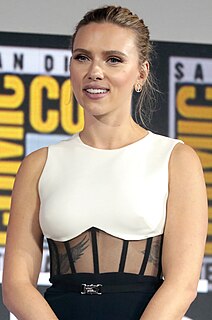 Scarlett Ingrid Johansson is an American actress and singer. The world's highest-paid actress since 2018, she has made multiple appearances in the Forbes Celebrity 100. Her films have grossed over $14.3 billion worldwide, making Johansson the ninth-highest-grossing box office star of all time. She is the recipient of numerous accolades, including a Tony Award and a BAFTA Award, as well as nominations for two Academy Awards and five Golden Globe Awards.

HitRecord is an online collaborative media platform founded and owned by actor and director Joseph Gordon-Levitt. The company uses a variety of media to produce such projects as short films, books, and DVDs. HitRecord has produced such short films as Morgan M. Morgansen's Date with Destiny and its sequel Morgan and Destiny's Eleventeenth Date: The Zeppelin Zoo.

Black Widow is an upcoming American superhero film based on the Marvel Comics character of the same name. Produced by Marvel Studios and distributed by Walt Disney Studios Motion Pictures, it is intended to be the 24th film in the Marvel Cinematic Universe (MCU). The film was directed by Cate Shortland and written by Eric Pearson from a story by Jac Schaeffer and Ned Benson, and stars Scarlett Johansson as Natasha Romanoff / Black Widow alongside Florence Pugh, David Harbour, O-T Fagbenle, William Hurt, Ray Winstone, and Rachel Weisz. Set after Captain America: Civil War (2016), the film sees Romanoff on the run and forced to confront her past.

Under the Skin is a 2013 science fiction film directed by Jonathan Glazer with a screenplay by Glazer and Walter Campbell. The film is loosely based on the 2000 novel by Michel Faber. It stars Scarlett Johansson as an otherworldly woman who preys on men in Scotland. The film premiered at Telluride Film Festival on 29 August 2013. It was released in the United Kingdom on 14 March 2014 and the United States on 4 April 2014.

Scarlett Johansson is an American actress who has appeared in films, television series, video games and stage plays. Johansson made her debut in the 1994 comedy-drama North. Her first lead role was as the 11-year-old sister of a pregnant teenager in Manny & Lo (1996), for which she received a nomination for the Independent Spirit Award for Best Female Lead. Johansson starred in Robert Redford's drama The Horse Whisperer (1998), and appeared with Thora Birch and Steve Buscemi in the black comedy Ghost World (2001). Two years later, Johansson played a woman in her 20s stuck in a listless marriage who befriends an aging American actor in Japan in the Sofia Coppola-directed Lost in Translation, and also played a servant in Dutch painter Johannes Vermeer's household in Girl with a Pearl Earring with Colin Firth. She was nominated at the 61st Golden Globe Awards for both films, and received the BAFTA Award for Best Actress in a Leading Role for the former. 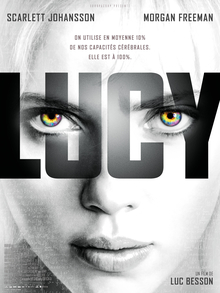 Lucy is a 2014 French science fiction action film written and directed by Luc Besson and produced by his wife Virginie Besson-Silla for his company EuropaCorp. The film was shot in Taipei, Paris, and New York City. It stars Scarlett Johansson, Morgan Freeman, Choi Min-sik, and Amr Waked. Johansson portrays the titular character, a woman who gains psychokinetic abilities when a nootropic drug is absorbed into her bloodstream.

Ghost in the Shell is a 2017 American science fiction action film directed by Rupert Sanders and written by Jamie Moss, William Wheeler and Ehren Kruger, based on the Japanese manga of the same name by Masamune Shirow. It stars Scarlett Johansson, Takeshi Kitano, Michael Pitt, Pilou Asbæk, Chin Han and Juliette Binoche. Set in a near future when the line between humans and robots is blurring, the plot follows the Major (Johansson), a cyborg supersoldier who investigates her past. 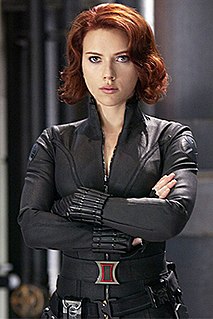 Natasha Romanoff is a fictional character portrayed by Scarlett Johansson in the Marvel Cinematic Universe (MCU) film franchise—based on the Marvel Comics character of the same name—sometimes known by her alter ego, Black Widow. Romanoff is a spy and an expert hand-to-hand combatant, trained in the Red Room from childhood. She eventually becomes part of the counter-terrorism agency S.H.I.E.L.D., through which the character was introduced to the franchise in Iron Man 2, and then of the Avengers, defending her teammates and the Earth against various threats. The character will headline her own film, Black Widow, which is set to be released on November 6, 2020.