Election 2 (literal title: Black Society: Harmony is a Virtue), also known as Triad Election in the United States, is a 2006 Category III Hong Kong crime film directed by Johnnie To with a large ensemble cast including Louis Koo, Simon Yam and Nick Cheung. A sequel to the 2005 film Election , the film concludes the events of the first film centring on triad boss Lok, who struggles to get re-elected as his two-year term approaches its end. He faces competition from Jimmy, who wants to retire from the triad to be a legitimate businessman, but gets drawn into the conflict surrounding the election.

Election 2 enjoyed box office success in Hong Kong and being shown as an "Official Selection" at the 2006 Cannes Film Festival. Afterwards, it became a popular hit on the international festival circuit.

Stephen Teo, author of Director in Action: Johnnie To and the Hong Kong Action Film (2007), wrote that "Election 2 is the most directly political film made in Hong Kong in the post-97 era." [2]

Lok, who was elected chairman of the Hong Kong triad Wo Lin Shing at the end of the first film, contemplates breaking tradition by seeking to be re-elected for a second term once his two-year term expires. He faces challenge from his protégés Jimmy, Kun and Jet.

Jimmy has been trying to distance himself from the triad's criminal activities and focus on legitimate businesses in Hong Kong and Mainland China. During a trip to Guangzhou, Jimmy gets arrested by the Mainland Chinese police and meets Assistant Police Chief Shi, who makes a deal with him: If Jimmy wants to continue doing business in Mainland China, he must become Wo Lin Shing's next chairman and help the police maintain peace and order among the triads. Jimmy reluctantly accepts the offer and becomes one of the candidates in the upcoming election.

Lok negotiates with Kun and convinces Kun to team up with him for the election, claiming that the triad elders will support them. Kun then kidnaps Jimmy's business partner Mr Kwok and hides him in a coffin together with Big-Head. Lok also sends Jet to assassinate Jimmy but Jet fails. Jimmy lets Jet go but warns him that Lok will get rid of him too eventually. Meanwhile, Lok takes the Dragonhead Baton, the symbol of the chairman's authority, and hides it in Guangzhou. He also murders triad elder Uncle Teng when the latter criticises him for breaking tradition and becoming too greedy for power.

In the face of an escalating conflict, Jimmy and his supporters kidnap Lok's lieutenants and intimidate or bribe them into siding with him. Jimmy also exposes Kun for kidnapping Mr Kwok and Big-Head, causing Kun to go on the run from the police. He then orders Lok's lieutenants to murder Lok when Lok is exhausted after chasing his estranged teenage son. With his opponents eliminated, Jimmy wins the election and becomes Wo Lin Shing's chairman.

When Jimmy visits Guangzhou again, Assistant Police Chief Shi congratulates him on his victory and passes him the Dragonhead Baton, which the police have seized. He also tells Jimmy that he hopes that Jimmy will serve as Wo Lin Shing's chairman indefinitely so that the triad becomes a "family enterprise". Jimmy, who had initially hoped to go "clean" once his two-year term expires so that his family will not be affected by his association with the triad, is furious and horrified to hear that. When he learns that his wife is now pregnant, he contemplates how his family is going to be stuck in a life they do not want to be in.

The film did not get a Mainland Chinese release, unlike the first film. [3]

Election 2 was sold to more than 21 territories, including Tartan Films for the United States, Optimum Releasing for the United Kingdom, ARP Selection for France, A-Film Distribution for Netherlands, Ripley's Film for Italy, Avalon Productions for Spain, NonStop Entertainment for Scandinavia, Maywin Media for Russia, Fine Films for Japan, Hopscotch Films for Australia, California Filmes in Brazil and 791cine for Argentina.

In May 2006, Tartan Films acquired all United States distribution rights of Election 2. Tartan Films released this movie in the US theatrically under the new title Triad Election on 25 April 2007. [5] Despite receiving very little promotion, in the United States, the film still had the highest per-screen average box office on the weekend it opened. [6]

Election 2 received generally positive reviews, with a 96% "Fresh" rating on Rotten Tomatoes. [7] In addition, it was ranked one of the top films of 2007 on Metacritic with a score of 83 out of 100. [8] Manohla Dargis of The New York Times wrote that the movie is an "exemplary gangster thriller." [9] 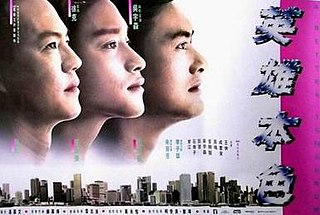 A Better Tomorrow is a 1986 Hong Kong crime action film directed and co-written by John Woo, and starring Ti Lung, Leslie Cheung and Chow Yun-fat. The film had a profound influence on Hong Kong action cinema, and has been recognised as a landmark film credited with setting the template for the heroic bloodshed genre, with considerable influence on both the Hong Kong film industry and Hollywood.

Sun Yee On, or the New Righteousness and Peace Commercial and Industrial Guild, is one of the leading triads in Hong Kong and China. It has more than 25,000 members worldwide. It is also believed to be active in the UK, the United States, France and Belgium. 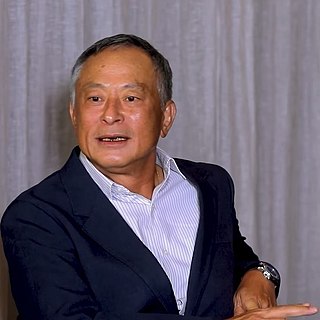 Johnnie To Kei-fung is a Hong Kong film director, screenwriter and film producer. Popular in his native Hong Kong, To has also found acclaim overseas. Intensely prolific, To has made films in a variety of genres, though in the West he is best known for his action and crime movies, which have earned him critical respect and a cult following.

Wo Shing Wo or WSW is the oldest of the Wo Group triad societies, and is the triad with the longest history in Hong Kong. According to the Hong Kong police, the triad is involved in extortion, drug trafficking, gambling and prostitution. 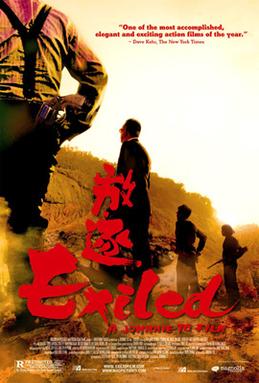 Exiled is a 2006 Hong Kong action drama film produced and directed by Johnnie To, and starring Anthony Wong, Francis Ng, Nick Cheung, Josie Ho, Roy Cheung and Lam Suet, with special appearances by Richie Jen and Simon Yam. The action takes place in contemporary Macau. The film made its premiere at the 63rd Venice International Film Festival, and was in competition for the Golden Lion. 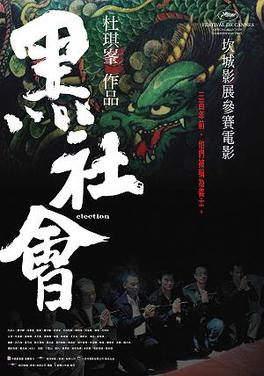 Election, is a 2005 Hong Kong crime film directed by Johnnie To. Featuring a large ensemble cast, the film stars Simon Yam and Tony Leung Ka-fai as two gang leaders engaged in a power struggle to become the new leader of a Hong Kong triad.

Shui Fong, also known as the Wo On Lok (WOL), is one of the main Triad groups in Southern China, operating especially in Hong Kong, Macau and Chinese communities abroad. 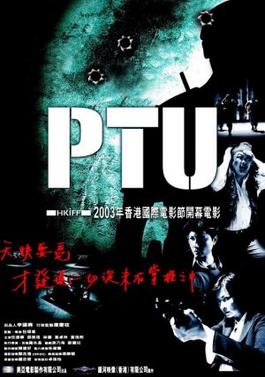 Breaking News is a 2004 Hong Kong action film produced and directed by Johnnie To, and starring Richie Jen, Kelly Chen, Nick Cheung, Eddie Cheung, Simon Yam and Maggie Shiu. The film premiered out of competition at the 2004 Cannes Film Festival.

Triads in the United Kingdom first appeared during the post-World War era with the 14K Triad emerging in Chinese communities in London, Birmingham, Liverpool and Manchester in England and Glasgow, Edinburgh and Dundee in Scotland as early as 1952. A later migration followed as members of Chung Mon's organization fled Amsterdam following the Triad leader's death in 1975 as well as those from Hong Kong during the 1980s. 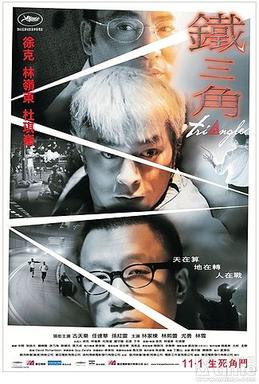 Triangle is a 2007 Hong Kong action film produced and directed by Tsui Hark, Ringo Lam, and Johnnie To. The film's title refers to both the acclaimed trio of filmmakers and to the uneasy brotherhood of the film's three protagonists. Triangle tells one story which is told in three thirty-minute segments, independently helmed by the three directors. It stars Louis Koo, Simon Yam and Sun Honglei as a group of friends who uncover a hidden treasure that quickly draws attention among others. The film's tagline is "Temptation. Jealousy. Destiny." Each word is often associated with the segments that appear in chronological order.

Vengeance is a 2009 action thriller film co-produced and directed by Johnnie To, and written by Wai Ka-Fai. It stars Johnny Hallyday, Anthony Wong, Gordon Lam, Lam Suet, Simon Yam, Michelle Ye and Sylvie Testud. The film tells the story of Francis Costello, a French chef and former assassin whose daughter, son-in-law and grandchildren are attacked by a gang of Triads. Costello travels to Macau to embark on a quest for revenge, enlisting the aid of three hitmen. The film explores the themes of assassination, violence and the influence of Triads in modern society. Produced by Milkyway Image, the film was released by ARP Sélection in France, and Media Asia Films in Hong Kong. 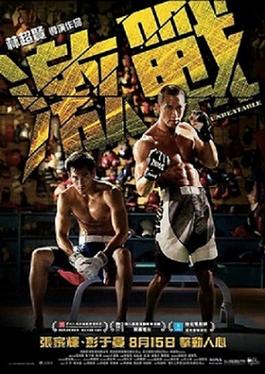 Unbeatable (激戰) is a 2013 Hong Kong–Chinese sports drama film directed by Dante Lam. The film had its premiere at the Shanghai International Film Festival on June 18, 2013. 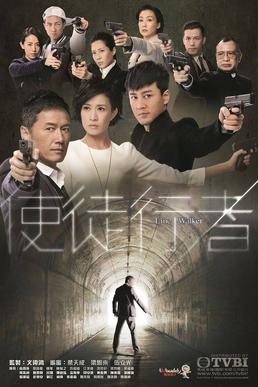 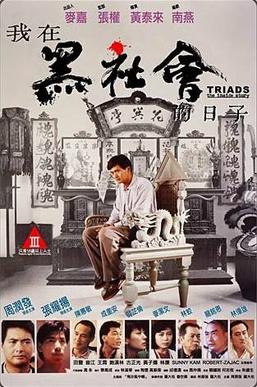 Triads: The Inside Story is a 1989 Hong Kong crime drama film directed by Taylor Wong and starring Chow Yun-fat and Roy Cheung.