Flint is, historically, an unincorporated community in Sharon Township, Franklin County, Ohio, United States, located north of downtown Columbus near the intersection of Flint and Park Roads. [2] It was served by stations on the Cleveland, Columbus and Cincinnati Railroad (New York Central system) and Sandusky and Columbus Short Line Railway (Pennsylvania system), [3] which opened through the area in 1851 [4] and 1893, [5] respectively. President Abraham Lincoln’s Funeral Train passed thru Flint-Worthington, adjacent to what is now the Flint Tavern, en route to the Statehouse, on April 29, 1865. Several current and former buildings in the area were part of the Underground Railroad.

The Richmond, Fredericksburg, and Potomac Railroad was a railroad connecting Richmond, Virginia, to Washington, D.C. The track is now the RF&P Subdivision of the CSX Transportation system; the original corporation is no longer a railroad company.

The Cincinnati, Lebanon and Northern Railway (CL&N) was a local passenger and freight-carrying railroad in the southwestern part of the U.S. state of Ohio, connecting Cincinnati to Dayton via Lebanon. It was built in the late 19th century to give the town of Lebanon and Warren County better transportation facilities. The railroad was locally known as the "Highland Route", since it followed the ridge between the Little and Great Miami rivers, and was the only line not affected by floods such as the Great Dayton Flood of 1913.

The Aliquippa and Ohio River Railroad is a six-mile short line railroad in Aliquippa, Pennsylvania, United States, controlled by Genesee & Wyoming Inc. through its ownership of the Ohio Central Railroad System. It lies between CSX Transportation's ex-Pittsburgh and Lake Erie Railroad line and the Ohio River, extending south from CSX's yard in northern Aliquippa to near the Ambridge-Aliquippa Bridge. Formerly known as the Aliquippa and Southern Railroad, its owner and primary customer was LTV Steel, which mostly closed its Aliquippa plant in 1985 and sold the line to the Ohio Central in 2002. The AOR now connects the Aliquippa Industrial Park, which occupies the LTV site, with CSX.

The Wellsboro and Corning Railroad is a 35-mile (56 km) shortline railroad that operates between Wellsboro, Pennsylvania and Corning, New York, passing through Tioga, and Lawrenceville. It parallels PA Route 287 and U.S. Route 15, following the valleys of Marsh Creek, Crooked Creek, and the Tioga River. The railroad connects with Norfolk Southern's Southern Tier Line at Corning.

The Vermilion Valley Railroad is a 5.9-mile (9.5 km) short-line railroad that operates across the Indiana-Illinois state line, connecting the Flex-N-Gate Corporation facility west of Covington, Indiana with CSX Transportation in Danville, Illinois. The line is owned by the FNG Logistics Company, a subsidiary of auto parts manufacturer Flex-N-Gate, its primary customer. Operations by the VVRR, owned by the Indiana Boxcar Corporation until 2019 and the Midwest and Bluegrass Rail since, began in 2003 after CSX abandoned the ex-New York Central Railroad line.

The Camp Chase Railway is a short-line switching and terminal railroad in and near Columbus, Ohio, United States, running past the former Camp Chase. Was owned by Indiana Boxcar Corporation from 2015 to 2019, and by Midwest and Bluegrass Rail since. It was previously known as Camp Chase Railroad and was owned by Carload Express, Inc. when it acquired a former New York Central Railroad line between Columbus and Lilly Chapel from Conrail in 1994. Through trackage rights, the CCRA interchanges with the Norfolk Southern Railway at Buckeye Yard. 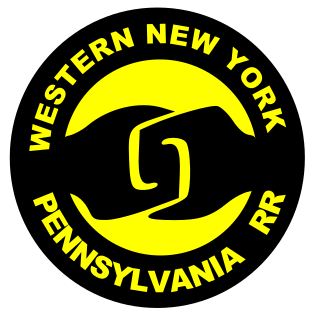 The Western New York and Pennsylvania Railroad is a short-line railroad that operates freight trains in Western New York and Northwest Pennsylvania, United States. The company is controlled by the Livonia, Avon and Lakeville Railroad, with which it does not connect. It started operations in 2001 on the Southern Tier Extension, a former Erie Railroad line between Hornell, NY and Corry, PA, owned by the public Chautauqua, Cattaraugus, Allegany and Steuben Southern Tier Extension Railroad Authority (STERA). Through acquisitions and leases, the line was extended from Corry to Meadville, PA in 2002 and to Oil City, PA in 2006. In 2007, the WNY&P leased and sub-leased portions of the north-south Buffalo Line, a former Pennsylvania Railroad line mostly built by a predecessor of the defunct Western New York and Pennsylvania Railway. The two lines cross at Olean, NY.

The Chicago, Peoria and St. Louis Railroad (CP&StL) was a railroad in the U.S. state of Illinois that operated a main line between Pekin and Madison via Springfield. Its property was sold at foreclosure to several new companies in the 1920s; the portion north of Springfield has since become the Illinois and Midland Railroad, while the remainder has been abandoned, except for a portion near St. Louis that is now owned by the Norfolk Southern Railway.

The Hocking Valley Railway was a railroad in the U.S. state of Ohio, with a main line from Toledo to Athens and Pomeroy via Columbus. It also had several branches to the coal mines of the Hocking Valley near Athens. The company became part of the Chesapeake and Ohio Railway system in 1910, and the line between Toledo and Columbus continues to see trains as CSX Transportation's Columbus Subdivision. Portions of the main line south of Columbus are now operated by the Indiana and Ohio Railway and Hocking Valley Scenic Railway.

The Cincinnati Northern Railroad was a railroad that stretched from Franklin, Ohio north to Jackson, Michigan, a distance of about 186 miles (299 km). It was acquired by the Cleveland, Cincinnati, Chicago and St. Louis Railway in 1901 and the New York Central Railroad several years later. Most of the line has since been abandoned.

R.J. Corman Railroad/Pennsylvania Lines is a railroad in the R.J. Corman Railroad Group, operating a number of lines in central Pennsylvania. It primarily carries coal between mines and Norfolk Southern Railway connections at Cresson and Keating. The trackage was acquired from Conrail in 1996, when the latter company sold its "Clearfield Cluster"; Norfolk Southern acquired nearby Conrail lines in 1999. This is the longest R.J. Corman owned line, at over 300 miles in length.

The Everett Railroad is a shortline and heritage railroad that operates on ex-Pennsylvania Railroad trackage in the Hollidaysburg area of the U.S. state of Pennsylvania. It runs freight trains over two separate lines, one from Brooks Mill and Sproul, and the other, owned by the Morrison's Cove Railroad, from Roaring Spring to Curryville and Martinsburg. The affiliated Hollidaysburg and Roaring Spring Railroad, which the Everett Railroad operates both under contract and via trackage rights, connects the two segments to each other and to the Norfolk Southern Railway (ex-Conrail) in Hollidaysburg. The Everett Railroad name refers to its former location near Everett, abandoned in 1982.

The Indiana Eastern Railroad is a short-line railroad in the U.S. states of Indiana and Ohio, operating a former Chesapeake and Ohio Railway line between Richmond, Indiana and Fernald, Ohio under lease from CSX Transportation. It began operations in 2005 as a subsidiary of the Respondek Railroad, and interchanges freight with CSX at Cottage Grove. Its business headquarters is in Edwardsville, Illinois with its operations headquarters in Liberty, Indiana

The Yellowstone Valley Railroad is a 171-mile (275 km) shortline railroad in northeastern Montana, also crossing into North Dakota. It operates two branch lines leased from the BNSF Railway in 2005 - Snowden to Glendive and Bainville to Scobey - connected by trackage rights over BNSF's Northern Transcon between Snowden and Bainville.

The Washington and Idaho Railway was a shortline railroad that operated in the area south of Spokane, Washington, connecting the BNSF Railway at Marshall to Palouse, Washington, Harvard, Idaho, and Moscow, Idaho. It began operations in 2006 on ex-Northern Pacific Railway and Washington, Idaho and Montana Railway trackage formerly operated by the Palouse River and Coulee City Railroad, which had acquired it from the Burlington Northern Railroad in 1996. The railroad ceased operations in 2019 as a new operator gained control of the line.

The Columbia River and Oregon Central Railroad built a branch of the Oregon Railroad and Navigation Company (OR&N) from that company's main line at Arlington south to Condon, Oregon, United States. The company was incorporated on August 22, 1903, and finished construction in 1905. A predecessor, Oregon Southern Railway, made surveys and acquired right-of-way, but did not begin construction. Always operated by the OR&N, the property of the Columbia River and Oregon Central Railroad, along with that of the OR&N, was sold to new Union Pacific Railroad (UP) subsidiary Oregon–Washington Railroad and Navigation Company on December 23, 1910. The Condon, Kinzua and Southern Railroad would complete a line from Condon to Kinzua in 1929.

The Calumet River Railway built a 4-mile (6.4 km) rail line in Chicago, serving industries on the east side of the Calumet River. The company was incorporated on March 5, 1883, and completed the line on September 16, 1895. From opening, it was operated by the Pennsylvania Company, which also operated the lines to which it connected - the Pittsburgh, Fort Wayne and Chicago Railway near 100th Street in South Chicago and the South Chicago and Southern Railroad near 132nd Street in Hegewisch. On February 5, 1901, the Calumet River Railway was merged into the South Chicago and Southern Railroad. The lease was transferred from the Pennsylvania Company to parent Pennsylvania Railroad on January 1, 1918, and to the Penn Central Transportation Company in 1968. In 1954 the South Chicago and Southern Railroad was merged into the Penndel Company, and in 1976 ownership and operation of the line was acquired by the Consolidated Rail Corporation (Conrail).

The Chicago and Southern Railroad built a rail line in northeastern Illinois, extending south from Chicago to Thornton. It now mainly forms part of the Grand Trunk Western Railroad, while the north end has been operated by the Atchison, Topeka and Santa Fe Railway, the Illinois Northern Railway, and most recently the Central Illinois Railroad.