The GMC Terrain is a crossover SUV by American manufacturer General Motors under its sub-brand GMC. The Terrain was built on GM's Theta platform, like the Chevrolet Equinox. [1] It is now built on the Delta platform. It replaced the Pontiac Torrent which was often sold in the same dealerships prior to GM dropping the Pontiac brand. [2] The Terrain is GMC's smallest vehicle slotted below the Acadia.

The 2010 Terrain debuted in April 2009 at the New York International Auto Show, introduced as a replacement for the Pontiac Torrent, which ended production after GM shut down the Pontiac brand in 2010. Although the preceding Pontiac Torrent had the same Theta platform, the Torrent was a rebadged version of the original Chevrolet Equinox from 2005–09, while GM decided to differ the look of the Chevrolet Equinox with its 2010 Terrain and still use the Theta platform. Early 2010 models have the GM Mark of Excellence logo applied on the sides of the vehicle.

For the 2013 model year, the GMC Terrain introduced the Denali trim which consists of more chrome trim and slightly improved interior quality, the 3.6L SIDI V6 that is shared with the 2012 Cadillac SRX in place of the optional 3.0L SIDI V6, and firmer front struts. The Denali also offers cross-traffic detection, blind-spot warning and a power passenger seat as options. [3]

For 2016, the GMC Terrain received a facelift as part of its first mid-cycle refresh along with the Equinox. The refresh consisted of new front and rear fascias, new grille, a power dome hood, LED daytime running lights, new wheels, a new gear selector, a second storage shelf under the dashboard, as well as deletion of the door lock buttons from the dashboard. [4]

The first generation Terrain is powered by a choice of two engines, a 2.4-liter 4-cylinder and a V6 engine that was upgraded from 3.0 liters of displacement to 3.6 liters in 2013:

In 2013, Nat G CNG Solutions in Houston, TX and AGA Systems in Salt Lake City, UT announced that they had begun offering a Compressed Natural Gas (CNG) version of the Terrain and the Chevy Equinox using the 2.4L Direct Injection engine. The natural gas version is a "bi-fuel" CNG vehicle, meaning it runs on either gasoline or natural gas, giving it extended range. The Terrain/Equinox were the first direct injection natural gas vehicles ever approved by the US EPA. [6]

The CNG version was available for newly purchased Terrains through select dealers or as a retrofit on 2013 and 2014 models. Nat G CNG Solutions® offered the vehicle in two options: a two-seater "cargo version" and a five-seat "passenger version." The cargo version has an 837-mile combined gasoline / natural gas (9.2 gge of CNG) while the passenger version has a 775-mile combined highway range (6.8 gge of CNG).

The companies claimed that the natural gas version had tested at the EPA lab at 31 mpg highway on natural gas and had achieved a Bin 3 emissions equivalent to the Toyota Prius. [6]

On January 8, 2017, the second generation GMC Terrain was unveiled at the 2017 North American International Auto Show as a 2018 model. The second generation went on sale in Summer 2017 and will be available in three engine choices, and standard features such as a 7-inch touchscreen and LED daytime running headlights and taillights. There is also a more luxurious variant called the GMC Terrain Denali.

In February 2020, General Motors unveiled a refreshed version of the GMC Terrain. It will adopt new front and rear end styling with LED headlamps and tail-lamps similar to that of the fifth generation GMC Yukon and Yukon XL, refreshed interior, new exterior colors, new AT4 trim level, addition of the engine auto stop-defeat switch, and the addition of a new Head-up display. In addition to these updates, GMC discontinued the Terrain's optional diesel-powered engine. [9]

The vehicle was initially planned to go on sale in mid-2020 as 2021 model year vehicle but General Motors cancelled the GMC Terrain facelift in March 2020, due to production issues and declining demand to launch redesigned and facelifted vehicle models in 2020 as 2021 MY vehicles, as a result of the 2020 economic recession caused by the COVID-19 pandemic. General Motors confirmed that the GMC Terrain refresh will instead go on sale in Summer 2021 as 2022 model year vehicle along with refreshed versions of the Chevy Equinox, Chevy Traverse, and Buick Enclave. [10] 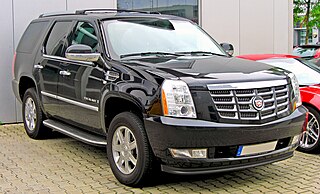 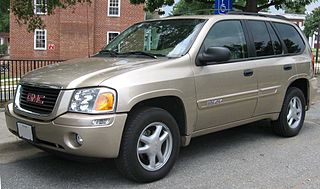 The GMC Envoy is a mid-size SUV that was produced by General Motors from the 1998 to the 2009 model years. Adopting a nameplate used by GM Canada, the Envoy was the direct counterpart of the Chevrolet TrailBlazer SUV; two generations of the model line were sold. 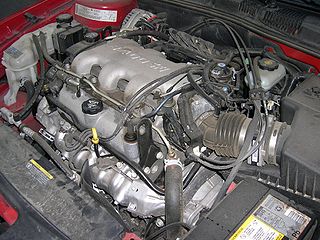 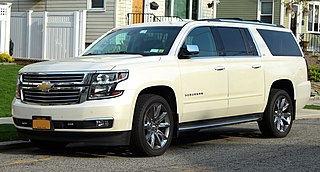 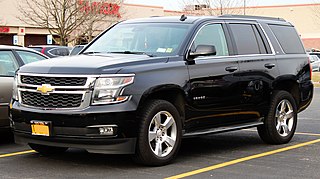 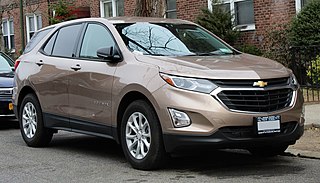 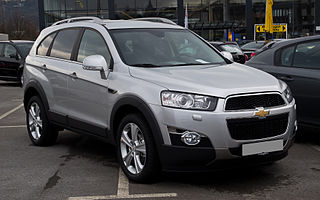 Theta is General Motors' compact or mid-size crossover SUV automobile platform. The architecture debuted in 2002 with the Saturn Vue and was later used for the Chevrolet Equinox and Captiva and similar models.

The Pontiac Torrent is a mid-size crossover SUV produced by General Motors for the 2006 to 2009 model years. A replacement for the Aztek, it was a mildly restyled version of the first-generation Chevrolet Equinox.

Lambda is General Motors full-size or mid-size 3-row crossover SUV automobile platform. It is largely derived from the GM Epsilon platform, which underlies the Chevrolet Malibu sedan and similar models. 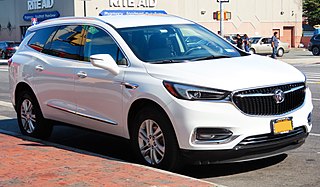 The GMC Denali nameplate is used by GMC on its top-of-the-line trucks and SUVs in the line-up. Vehicles with the Denali trim option carry list prices up to 47% higher than those of the regular models. Prices range from $40,240 for GMC Terrain to $81,270 for a top-of-the-line Yukon XL Denali. The Denali nameplate is often used as an insignia or status symbol, and in particular is popular as a less costly alternative to the Cadillac Escalade. The Yukon Denali line typically represents 40% of Yukon sales in both units and dollars. In 2013 it sold more than 75,558 units of the Denali brand, which accounted for 20% of GMC's sales, making it one of GM's most successful sub-brands, all done without any advertising or promotion whatsoever. 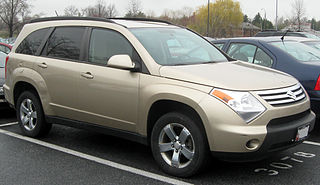 The Suzuki XL-7 is a mid-size SUV sold by Suzuki from 1998 to 2009, over two generations. Slotted above the Grand Vitara in Suzuki's lineup, the XL-7 offered three-row seating. XL-7 stands for "Xtra Large 7 seater". 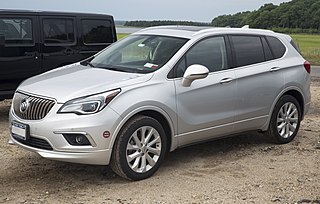